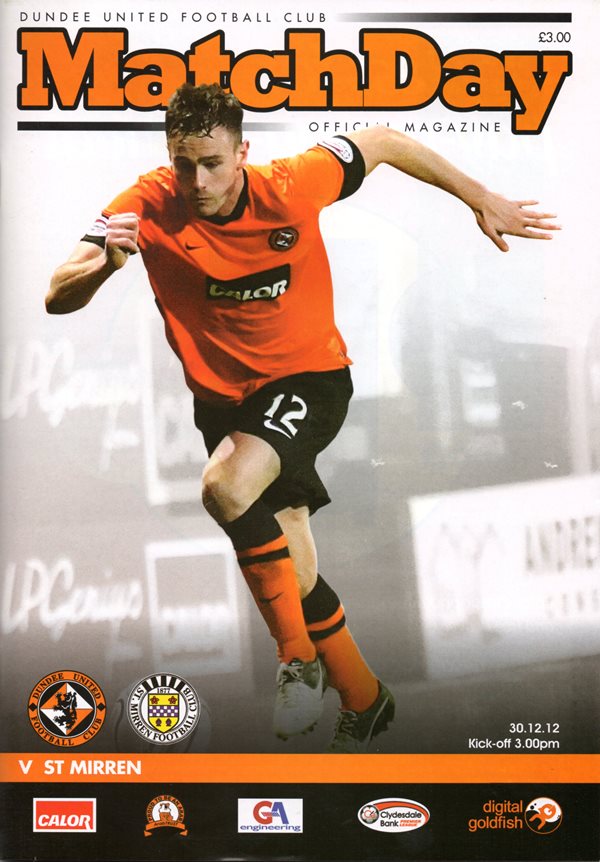 St Mirren arrived at Tannadice on a brisk winter’s afternoon for the final Scottish football fixture of 2012, the Paisley men going in to the match with some confidence following impressive performances against Motherwell and Inverness. United manager Peter Houston made one change from the Boxing Day draw with St Johnstone, Mark Millar coming in for Rudi Skacel, with the Czech Republic cap dropping to the bench. The visitors welcomed Jim Goodwin, Marc McAusland, Paul Dummett and Lewis Guy back to their starting eleven.

The Terrors won the toss and elected to kick off ‘down the slope’ towards the Eddie Thompson stand, and the home side were the first to threaten, Gavin Gunning’s header from a Willo Flood corner going wide of the post after four minutes. The visitors responded five minutes later. Paul McGowan earned a foul on the left, and Gary Teale drove the resulting free kick around the United wall, but Radoslaw Cierzniak was equal to the effort, turning past at the expense of a corner. With a quarter of an hour gone United almost took the lead. Gunning again headed from a Flood corner, but Craig Samson in the Buddies goal make a good save, and just seconds later Johnny Russell rose above the Saints rearguard to head inches wide of Samson’s right hand post. But despite a promising start to the game it was St Mirren who opened the scoring after 16 minutes. Jon Robertson played Teale in on the right, and the former Wigan winger jinked past the United defence before squaring for Paul Dummett, who steered the ball into the empty net to put the Saints 1-0 up. United looked to level immediately, and almost did so just moments later. Stuart Armstrong drove from midfield before putting Russell in on the St Mirren goal, but the United forward’s low shot went just wide of the goal. In the 19th minute St Mirren almost doubled their advantage. The influential Teale took a corner on the right, and erstwhile United man Steven Thompson’s header was cleared off the line by Gunning. A minute later Thompson was again involved after another cross from the right evaded the United back-four, but the St Mirren striker shot wide from ten yards when he should have scored. The supporters were being treated to an abundance of goalmouth action with defensive frailties evident at both ends of the pitch, and Barry Douglas was next to try his luck, the full-back’s curling free kick from the right touched wide by Samson, before Daly’s header from the resulting corner went wide of the right hand post. In the 25th minute Peter Houston made an early, enforced substitution, Michael Gardyne replacing the injured Willo Flood. Armstrong was again involved after 37 minutes, getting on the end of a low Douglas cross from the left, but his low drive was blocked by the St Mirren defence. Soon after substitute Gardyne found space on the edge of the Buddies penalty area, but his shot went well wide of Samson’s left hand post. Two minutes before the break Douglas again sent in a dangerous cross. Daly looked to connect with the delivery but was clearly held back by goal-scorer Dummett for what looked like a clear foul. Referee Euan Norris agreed and awarded a penalty kick, and Jon Daly confidently converted the spot kick to level proceedings. The home side then turned the game on its head in incredible fashion, Stuart Armstrong putting United ahead a minute into first half stoppage time. The United midfielder turned brilliantly from a Douglas pass before firing a fierce drive from 30 yards out. Samson got a touch, but it wasn’t enough to keep the ball from hitting the net and the home side went into the interval with an unlikely lead.

The second half began in a similarly carefree fashion, and St Mirren equalised just five minutes after the break. A mix-up in the United defence allowed Steven Thompson to go one-on-one with the United keeper, and the striker guided the ball past Cierzniak to make the game all-square once more. Following a lull in the action, the first of the afternoon, St Mirren regained the lead after 66 minutes. The impressive Teale won a free-kick on the right, and the veteran’s set-piece fell to defender Marc McAusland, who lashed the ball home from six yards to put the away side 3-2 ahead. United were presented with a gift to level the scores almost immediately, but Gardyne’s effort from just inside the St Mirren box went high over the crossbar. Three minutes later the Terrors were reduced to ten men, with Brian McLean shown a straight red card following a late challenge on St Mirren midfielder John McGinn. Shortly after Peter Houston played his last two cards, bringing Rudi Skacel and Richie Ryan on for Keith Watson and Mark Millar. In the 78th minute St Mirren extended their lead. David Van Zanten’s cross come shot from the right evaded everyone including United ‘keeper Cierzniak, before nestling in the bottom corner of the net to finish the game as a contest. As the skies opened with a driving rain that seemed to echo the gloomy mood of the United support, many in the home end had seen enough and began to head for the exits. Those posted missing missed an outstanding third goal for United in the final minute of the match. Barry Douglas curled a wonderful free-kick into the top corner from all of 25 yards out to make the final score slightly more respectable for the Tangerines.