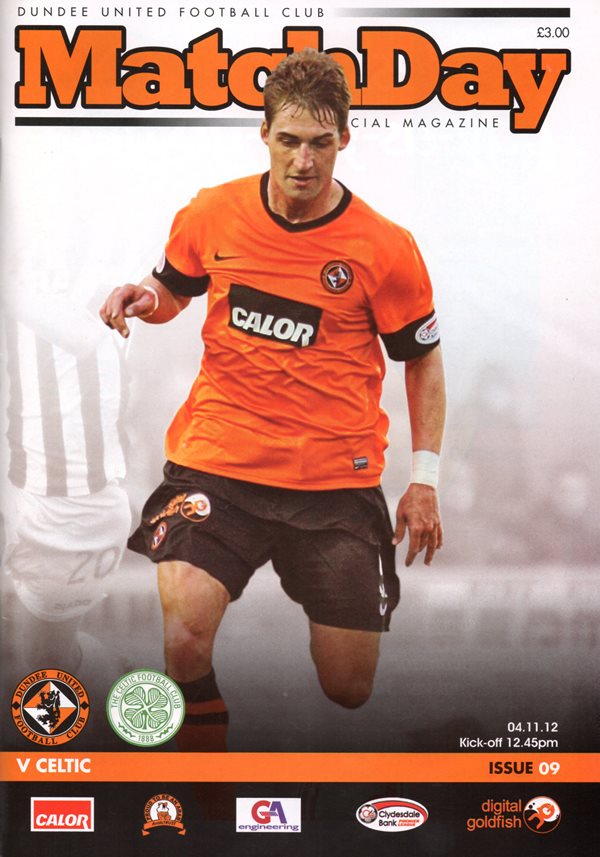 United welcomed Celtic to Tannadice for a televised lunchtime kick-off, the Terrors with a point to prove following a disheartening defeat to Hearts in the League Cup. Peter Houston made just one change from midweek, Barry Douglas coming in for his first start in over two months, with Michael Gardyne dropping to the bench. Jon Daly moved into more familiar surroundings, partnering Johnny Russell in attack. The visitors made the journey to Tayside aiming to regain their place at the top of the table, with Hibernian’s victory over St Mirren positioning the Easter Road men as league leaders, temporarily at least. Neil Lennon brought in Adam Matthews, Thomas Rogne and Charlie Mulgrew to his starting line-up, with Mikael Lustig, Efe Ambrose and Gary Hooper dropping out.

United kicked off proceedings and started on the front foot, earning a corner in the first minute, but referee Willie Collum adjudged Jon Daly to have fouled from the resulting set-piece before blowing for a free-kick. Celtic though began to exert a sustained period of pressure on the United rearguard, without truly testing Cierzniak in the United goal, the Hoops’ first attempt at goal coming in the sixth minute when Victor Wanyama shot high and wide of goal from 25 yards. Six minutes later Celtic were presented with a glaring opportunity to take the lead. The Bhoys took a quick corner on the right, allowing Scott Brown to float a cross into the United penalty area. Thomas Rogne evaded his marker to find ample space, but the Norwegian headed wide of Cierzniak’s right-hand post when he should have tested the Pole at least. Tony Watt was the next Celtic player to try to break the deadlock, the young striker heading at goal via Kris Commons’s delivery from the right, but the header went over the United crossbar. Celtic created another opportunity after 27 minutes following some intricate possession football, Brown freeing Commons in the United box. The Scotland international poised to shoot before Barry Douglas made an excellent challenge just before Commons could pull the trigger. Ten minutes before the break United made inroads towards the Celtic goal, Daly and Russell playing a neat exchange before finding Stuart Armstrong 25 yards out. The midfielder tried his luck from range, but his shot went high over Fraser Forster’s goal and into the visiting fans in the Shed. Scott Brown was afforded the last opportunity of the first half, getting on the end of a fizzing Commons cross from the left, but the Celtic midfielder’s angled header didn’t have enough purchase on it, and the ball went well wide before the referee blew for the break.

Celtic almost opened the scoring within a minute of the second half. Emilio Izaguirre showed great tenacity, winning possession and driving at the United defence before exchanging passes with Tony Watt and firing an angled drive at the side netting that had some Celtic fans on their feet in the belief that the Honduran had scored. Five minutes after the break United should have taken the lead. Stuart Armstrong’s run at the Celtic defence had the away side on the ropes, and a neat passage of possession football eventually found Willo Flood on the edge of the box. The Irishman’s low drive was unconvincingly parried out by the Celtic ‘keeper directly to Johnny Russell, but the United striker blasted over from inside the box. United were now looking more confident in possession and potent in attack, and Barry Douglas sent in a delicious cross from the left shortly before the hour mark, but neither Daly nor Russell could connect with the delivery. The visitors though went 1-0 up after 69 minutes, despite a United resurgence. Wanyama and Watt linked up close to the United penalty area. Watt freed substitute Miku with a deft chip, and the striker dinked past the United defence before lifting the ball over the encroaching Cierzniak to give Celtic the lead. With just over a quarter of an hour to go the United fans in the Eddie Thompson stand claimed vociferously for a penalty. Substitute Rudi Skacel’s attempted cross from the by-line appeared to strike the raised arm of Adam Matthews, but referee Collum waved play on. But Celtic seemed to have finished the game as a contest after 80 minutes. The impressive Tony Watt intercepted a Cierzniak clearance and drove with pace at the retreating United back four before firing low past the Pole to put Celtic 2-0 up. With four minutes remaining Barry Douglas sent a cross in from the right following a foul on substitute Gary Mackay-Steven. Sean Dillon redirected the set-piece towards goal with a back-heel, but the ball went well over the bar. In the 89th minute United earned what appeared to be a late consolation. Celtic failed to clear Keith Watson’s long throw into the box, and the ball eventually fell to Gary Mackay-Steven who showed great composure to place the ball past Forster to make the score 2-1. Almost directly from the resulting kick-off United almost levelled. Russell was released on the left and drove a low shot across the face of the goal that went agonisingly wide. The Terrors appeared reinvigorated now and, incredibly, equalised in the 90th minute. Barry Douglas sent in a terrific cross from the left flank following incessant pressure. Celtic defender Efe Ambrose rose to clear, but his header sailed over team-mate Forster and into the goal to make it 2-2 and send the home fans into raptures, before United held on comfortably for the draw to give the Tangerines an unexpected but glorious point.