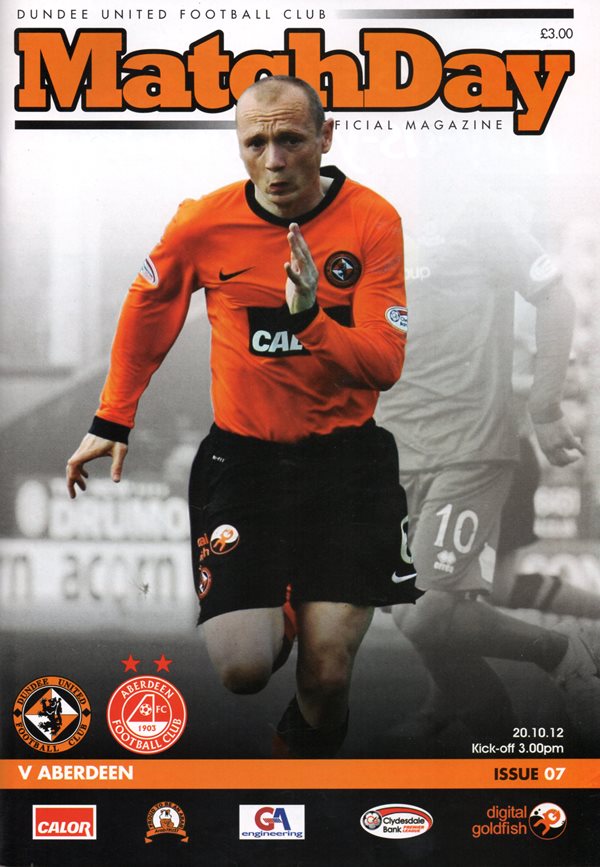 United made two changes to the side that lost heavily in Inverness, Keith Watson and Mark Millar coming in for Brian McLean and Richie Ryan, with Jon Daly playing in an unfamiliar position at centre half. Aberdeen boss Craig Brown introduced Clark Robertson and Chris Clark to his starting line-up, replacing the injured Ryan Jack and Andy Considine.

Traffic congestion on the A90 enforced a delayed kick-off, with Aberdeen beginning proceedings 15 minutes later than scheduled, the away side shooting towards the Eddie Thompson Stand. Stuart Armstrong was the first player to have a shot at goal, the United midfielder cutting in from the left after six minutes before unleashing a rasping drive from 25 yards that Dons keeper Jamie Langfield did well to save. A minute later Mark Millar found room from a similar distance, but his low drive was held comfortably by Langfield. United continued to try their luck from long range, with Michael Gardyne firing just over the crossbar from an acute angle in the 12th minute. And five minutes later Millar again shot from 25 yards out following a United corner, but his powerful drive was too central and Langfield held with relative ease. The Terrors were belying the form book by playing some nice possession football, with Aberdeen struggling to gain a foothold in the game, and not until the 17th minute did Craig Brown’s men have an attempt at goal, Gavin Rae’s shot flying wide of Radoslaw Cierzniak’s right-hand post. But United took a deserved lead after 22 minutes through John Rankin. Johnny Russell showed great skill and pace to skin Russell Anderson on the left before firing a fierce low drive at Langfield from inside the box. The Aberdeen keeper made a good save, but John Rankin was there to turn the rebound into the Dons net from six yards to put the Tangerines 1-0 up. Stuart Armstrong was enjoying a particularly productive afternoon, dribbling past the flailing Isaac Osbourne on the half hour mark and sending an inviting low cross into the Aberdeen penalty area, but the ball travelled just out of reach of his team mates before the Dons cleared. Four minutes later Aberdeen almost equalised. A delicious through ball from Osbourne freed Ryan Fraser on the right. The winger had space and time to find Scott Vernon in the United box, but Cierzniak made an excellent save from the striker’s low shot to turn wide for a corner. Johnny Russell spurned an excellent opportunity to increase United’s lead in the 36th minute after a terrific through pass from Armstrong put the striker one-on-one with Langfield. Russell was poised to release the trigger but Russell Anderson made an excellent last-ditch challenge and the ball went well wide for a goal kick. The match was being conducted in a wonderfully open and end-to-end fashion, and Aberdeen went agonisingly close to going level two minutes later, Anderson’s header cleared from the line by the head of Mark Millar. Shortly after Rankin aimed to double his goal tally with a shot from the edge of the box, but Langfield dived low and held, the final flourish of goalmouth activity before referee Ian Brines blew for half time.

Aberdeen re-appeared in determined fashion after the interval, and Niall McGinn tried his luck from the edge of the box in the 49th minute, but Cierzniak parried wide at the expense of a corner. And the away side were to equalise four minutes later. A corner from the right found McGinn at the back post via the head of Russell Anderson, and the Northern Irishman tucked the ball away from close range to make it 1-1. United looked to regain the advantage shortly after when Keith Watson connected with a Willo Flood set piece from the left, but the defender was thwarted by an outstanding, instinctive save from the Aberdeen keeper. On the hour mark Stuart Armstrong was presented with an opportunity in the Aberdeen box after a neat pass from Russell, but the midfielder’s half-volley went wide of Langfield’s near post. Armstrong again looked to test Langfield just a minute later, his potent shot from outside the penalty area flying past the left-hand post. Johnny Russell showed a touch of class after 66 minutes, leaving several Aberdeen defenders for dead with a marvellous mazy run, before striking a low shot at goal that Langfield parried clear. With quarter of an hour remaining, Scott Vernon squandered an excellent opportunity to give Aberdeen the lead, the Dons striker afforded too much room in the United box, but his shot was a tame one and Cierzniak saved easily. In the final minute United created a glorious opportunity to win the game when substitute Dale Hilson freed John Rankin in the Aberdeen penalty area. The midfielder had acres of room on the left but seemed caught in two minds, and his cross-come-shot flew beyond the encroaching United attackers and went wide of the goal. Both teams spent the remainder of the game looking to earn a winner but to no avail, and the referee called time with the game all square.