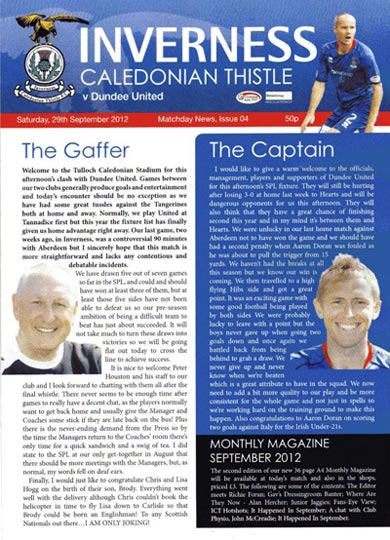 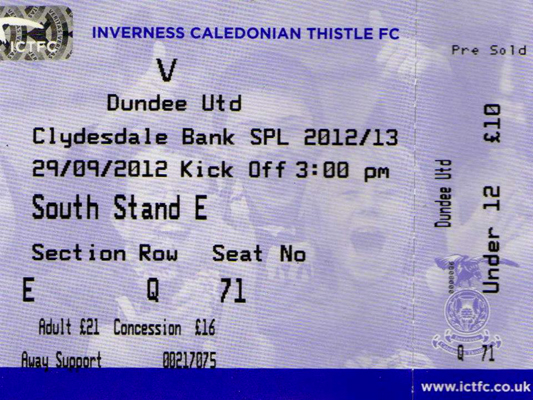 With victory in mind, both managers named attacking sides. Peter Houston opted for an unchanged United team from Tuesday’s Scottish Communities League Cup win at Queen of the South. Butcher, desperate to see his side get their first league win of the season, shuffled his pack. Esson, Pepper and McKay dropped to the bench and were replaced in the side by Reguero, Morrison and Roberts. Esson had been named in the side prior to the game but did not appear for the start of the match.

In blustery autumnal conditions, both clubs set out hoping to blow away early season inconsistency and kick start their season. The Tulloch Caledonian Stadium was bathed in sun for the kick off between the sides and it was the Tannadice men who were first to shine. After only 20 seconds, Gardyne burst free on the left, cut inside and struck a fierce shot just over. Five minutes later Russell was able to find space behind the Caley defence and rather than opting to shoot, he cut back for his strike partner Daly. The on rushing Captain was unable to capitalise and miscued his effort high and wide. United were creating all the chances in the early exchanges and Russell had another opportunity after 10 minutes. He escaped his marker and picked out Daly with a neat pass. However, the big striker’s sliding shot was blocked at the edge of the six yard box. Russell was quickest to the rebound but struck the side netting with his effort. Midway through the first half, good work by Russell on the right earned his side a corner. From the kick, Daly was given a glimpse of goal, only to side foot the ball straight at Reguero. The Spanish keeper spilled the shot but the danger was cleared. Against the run of play, Inverness took the lead with a great goal on 31 minutes. Strong support play by Shinnie opened up space for Richie Foran at the corner of the United box. Foran showed excellent composure to side foot a curling shot high past Cierzniak and into the top corner. United had barely come to terms with being behind when Caley struck again. Good play from Roberts on the left side allowed him to bend a dangerous cross towards United’s back post. The ball eluded the tangerine defenders and it was Foran again, who rose highest to loop a header into the far corner of the net. As the game edged towards half time, it was Inverness who looked more composed, clearly high in confidence following their back to back strikes.

United started the second half playing towards their band of supporters housed behind the goal in the South Stand. In an attempt to freshen up the United side, Houston made two midfield changes during the interval. Rankin and Gardyne remained in the dressing room, with Armstrong and Dow taking on the wide positions in the second half. Inverness continued from where they left off in the first half and created two early chances after the break, only to squander both. Aaron Doran was the main culprit with a miss hit effort from 18 yards. The first attempt from United was a well placed header from Jon Daly that forced Requero to touch over the bar. However, that was to be their only opportunity in the opening 20 minutes of the second half. With United failing to work their way back into the game, the Manager decided to make his third midfield change midway through the second period. Mark Millar took over from Richie Ryan in the centre of the park in a bid to inject some energy back into the side. The substitutions were not able to alter the run of play and just like in the first half United were hit by another two Inverness goals in a matter of minutes. Caley notched their third after Andrew Shinnie was able to take advantage of a number of ricochets in the United box. The Tannadice defenders were unable to clear their lines and the ball dropped to Shinnie who gleefully slammed into an empty goal. Minutes later it was the impressive Philip Roberts who was the next to notch a goal. The Midfielder was given space at the edge of the box and he let fly with a viscous effort that arrowed straight into the top corner of Cierzniak’s goal. Inverness looked happy to maintain that advantage for the remainder of the game and they were in total control as they contained United for the final 20 minutes. It was one of those days for United as they were unable to muster any significant chances in the second half.