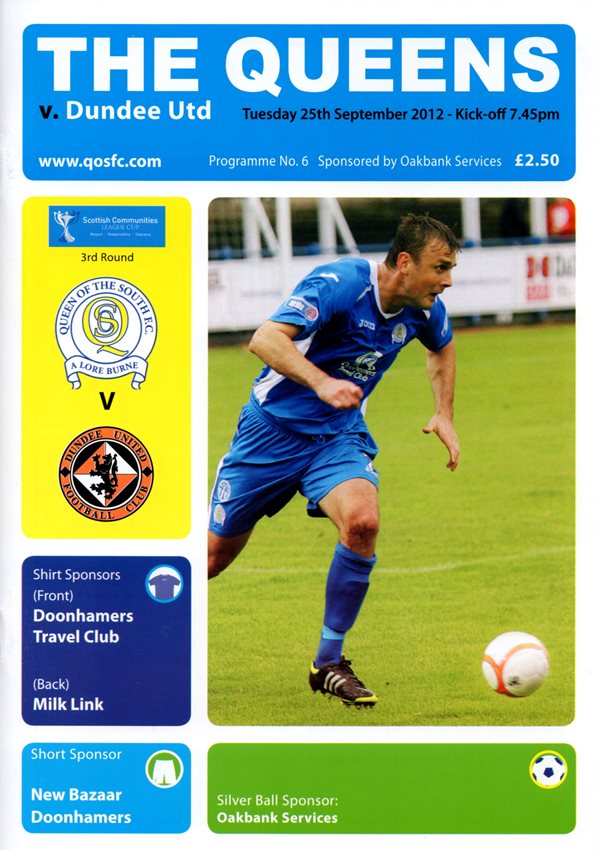 Everyone knew that it wouldn’t be easy against previously unbeaten Queen of the South who deserved the standing ovation from the home support after putting the Tangerines through the mill in the second half.

But in the end, it was Johnny Russell’s strike after 28 minutes, United’s first in four games that separated the sides.

After the disappointing defeat to Hearts, manager Peter Houston made two just changes, bringing in with experience coming at the expense of youth.

After coming off the bench against Hearts, Jon Daly started for the first time since being injured against St Johnstone, while Richie Ryan returned after sitting out the last two games.

Youngsters Stuart Armstrong and Ryan Dow dropped to the bench where they were joined by Mark Millar, Gregory Vignal and Steve Banks.

Starting sprightly, United posed the first threat after five minutes when good inter-play between Daly and John Rankin saw Johnny Russell played in, only for Mark Durnan to block his path.

Some 14 minutes elapsed before the Doonhamers demonstrated why they had caused cup upsets against Hibs and Rangers this season. Willie Gibson’s dangerous low driven cross being hacked away by Gavin Gunning for the game’s first corner.

With the Dumfries side pressing United hard, goalmouth action was at a premium, but that all changed on 28 minutes.
The ball was played out to Michael Gardyne wide on the left and he drilled in a low cross which Daly dummied, enabling Russell to rifle in a shot. Robinson blocked it, but couldn’t hold it and a grateful Russell rammed in the rebound.

A minute later Rado was called into action for the first time dropping on a Nicky Clark shot at his left-hand post.

As the game opened up, Daly was next to have a go, curling a shot from just outside the box just past. A minute later Seven McKenna was the first player to be booked for a foul on John Rankin.

Only a minute of the first half was left when Queens really threatened for the first time, Clark getting on the end of a Gibson free-kick, but Rado managed to claw his header over the bar.

The Doonhamers started the second half strongly and Jon Daly, back helping out in defence, blocked a Gavin Reilly shot on the turn.

For the first time in the match, the Tangerines’ defence was coming under concerted pressure with home side having got their tails up as they looked to maintain their undefeated record.

Half-time substitute Paul Burns headed just over after 56 minutes. Willo Flood was booked for chopping down Kevin Holt. And in attempt to stem the tide, Houstie brought on Armstrong for Ryan with 20 minutes into the second period.
Burns made a darting run into the box, but Gunning was there to avert the danger.

Two minutes later, Burns charged through the middle before releasing Clark whose first time shot was tipped round the post by Rado at full stretch.

There was another major let-off when Burns and Clark had shots blocked as United continued to live dangerously.
None more so than with 15 minutes left when Derek Young stabbed in an effort that deflected off Sean Dillon, but fortunately straight to Rado.

A dipping Gardyne effort from the edge of the box broke the home side’s monopoly and was followed by Mark Millar making his debut when replacing Flood.

Clark blasted past with nine minutes left and with it went the home side’s chance of rescuing matters.

Indeed, Russell almost put the tie to bed with three minutes left rounding the keeper before firing a shot towards the empty net only for it to be blocked.

Summing up: Pretty it was not, but reaching the next round is the be all, and end all, in any cup match, and United achieved that against Queens, something neither Hibs nor Rangers can claim.