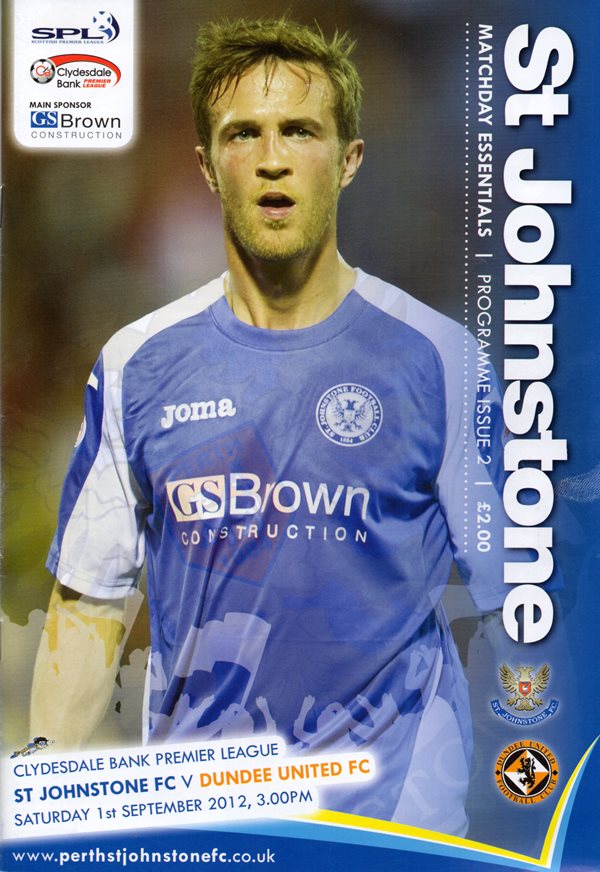 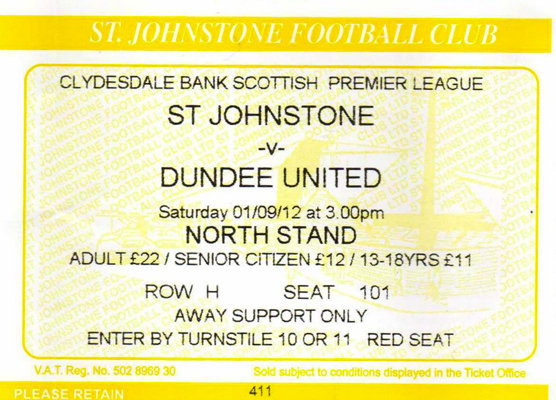 John Rankin was responsible for the afternoon’s first attempt on goal, finding space to try his luck 30 yards from goal in the second minute, but his trademark ‘squiggler’ went comfortably wide of Saints’ keeper Alan Mannus’ right-hand post. While the sun made infrequent cameos, conditions weren’t ideal for silky football, with a persistent autumnal gust doing its best to spoil the occasion for the purists. Despite this both teams were trying to keep the ball on the grass, and United in particular were playing some neat, easy on the eye stuff. 11 minutes in, the Terrors almost took the lead, and in some style. Jon Daly and Johnny Russell played some scintillating possession football on the edge of the St Johnstone penalty area, before freeing Willo Flood on the right. The Irishman composed himself before firing a fierce drive that had the United fans behind Mannus’ goal on their feet before the ball flew agonisingly wide. Keith Watson was forced to withdraw from the action midway through the first half, the full-back having sustained an injury during a committed challenge with Murray Davidson ten minutes earlier, with Brian McLean introduced from the bench. The home side appeared in determined mood following a poor start to the season, but their endeavour and graft was being rewarded with little in the way of goal-scoring opportunities, their strikers, perhaps understandably, edgy and reticent in the United penalty area. Not until Pawlett drove in on goal and tested Cierzniak with a stinging drive was the United goalkeeper genuinely tested. Shortly after Stuart Armstrong responded in kind with a sensational individual run, skinning Gary Miller on the flank with a fabulous dummy, before his low shot was parried wide for a corner. Seven minutes before the break Liam Craig almost put the home side in front with a fizzing cross-come-shot from the right, the United rearguard beguiled and relieved to see the ball spin wide of Cierzniak’s right-hand post.

The second half resumed as the first half had finished, with the action bogged down in midfield, and both sides cancelling each other out. Peter Houston seemed to be of the same opinion, using his two remaining substitutions to introduce Ryan Dow and Michael Gardyne for Richie Ryan and Jon Daly just 11 minutes after the interval. It was a bold move by Houston, but a necessary one, with United now operating with more width and attacking potential in the forward areas, and the game opened up somewhat as a result. But it was the home side making more impact on goal, and Tade found room in the United box in the 66th minute, swivelling to fire at Cierzniak, but the striker’s shot flew well over the bar. If the first half was bereft of chances, there are no words to describe the paucity of goalmouth action in the second half, neither keeper forced to make a save until, somewhat incredibly, the 81st minute, when Cierzniak blocked substitute Hasselbaink’s shot from just inside the box. From the resulting rebound Vine tried his luck from 25 yards but his shot travelled stratospheres above the United crossbar. Four minutes later, Liam Craig tried to break the deadlock from a free-kick 25 yards out, but again the shot went high and wide as the big United support behind the goal offered some light relief with an ironic cheer, the last incident of note before the referee called time.