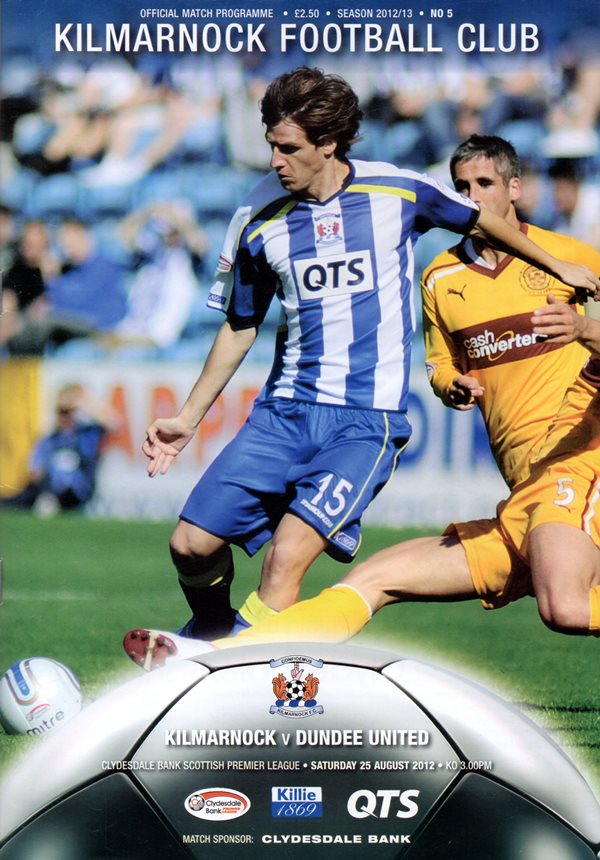 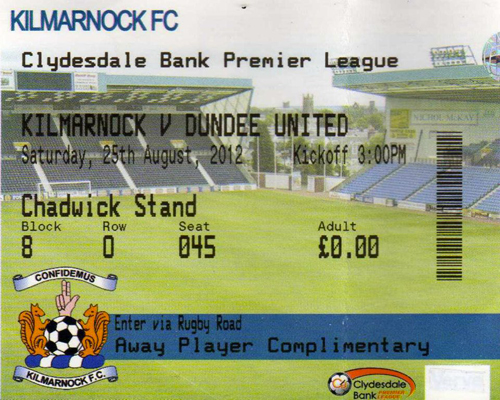 With Johnny Russell’s red card from the Dundee Derby downgraded to a yellow, Gary Mackay-Steven for Michael Gardyne was the only change from the side that won last Sunday’s derby as United looked to extend their winning start in the league to three victories, something they haven’t achieved for 22 years. Hosts Kilmarnock made four changes from the side that lost 2-1 at Motherwell as they looked for their first win of the season. Injured Scottish internationalist keeper Cammy Bell was replaced by Welshman Kyle Letheren, while Danny Racchi, Borja Perez, Rory McKenzie came in for Matthew Kennedy, Rory Boulding and Rory McKenzie.

The Ayrshire sunshine on offer before kick-off gave way to a shower just as the match kicked off, but quickly died out. Initial proceedings were scrappy although the Tangerines had by far the better of it in terms of possession, but without any end product. Indeed, 12 minutes elapsed before there was the remotest threat posed by either side, and it came from the hosts. Gary Harkins nodded the ball on and was injured in the process and the ball fell to Killie debutant Rory McKenzie who slipped it into the path of Borja Perez, but Sean Dillon stepped across to block the Spaniards’ shot for a corner. However, there was a three minute delay before it was taken with Harkins stretchered off and replaced by Jude Winchester. United’s first effort after 17 minutes saw Johnny Russell’s glancing header from a Keith Watson cross easily collected by Kyle Letheren. Four minutes later, United had their first real chance. Keith Watson was fouled down by the right-hand touchline and from Willo Flood’s free-kick skipper Jon Daly, in space, volleyed over from eight yards. Killie were in the match now and beginning to cause the United defence problems with Perez knocking a James Fowler cut-back past the post. And Dillon came to the rescue again to mop up the danger from another home attack. With Killie pressing hard, United just couldn’t get any fluency going as the half hour mark came and went. However, some invention from John Rankin presented Daly with a chance as his long cross-field pass found his skipper 15 yards from goal but though he struck the ball sweetly it flew wide of the far post. The first booking of the game came on 37 minutes when substitute Winchester chopped down Russell on the edge of the penalty area. From the resultant free-kick came the first save of the game, Letheren tipping over a Barry Douglas effort that was bound for the top corner. Shortly afterwards it took a timely intervention by Ryan O’Leary to nod away a dangerous Mackay-Steven cross. But with half-time looming Fowler put the United defence under pressure and twice they were happy to scramble the ball way. The first half came to a close with Killie forcing a couple of corners which Rado Cierzniak was happy to beat away at his near post. Four minutes of stoppage time failed to produce anything of note at the end of a disappointing first half.

But it wasn’t half as disappointing as the start to the second half when as United found themselves two down inside four minutes. With three minutes gone, United gifted Killie the opening goal with Rory McKenzie taking advantage of some suicidal defending from Barry Douglas. A minute later, Mackay-Steven brought down Racchi in the box and was booked for his trouble with Perez sending Rado the wrong way from the spot. And the United keeper was again in action seconds later tipping over a Jeroen Tessellaar screamer at his near post. That near miss prompted Peter Houston to immediately substitute Mackay-Steven and Richie Ryan with Stuart Armstrong and Michael Gardyne after 53 minutes. But the tale of woe continued two minutes later. The United defence failed to deal with a corner from the right at the far post which enabled Winchester to hammer home a third from close range. Spurred by their success, it was Kilie who always looked the likelier lot. The litany of errors continued and almost cost the visitors a fourth with 20 minutes left. McKenzie won possession all too easily down the left and drove at Sean Dillon who appeared to have averted only to slip, allowing the Killie striker in on goal, Rado beat away his shot at the near post. Racchi was booked for a foul on Gardyne with twelve minutes left. A minute later, United pulled one back when Douglas swung over a cross from the left which fell to Jon Daly and he instantly controlled it before firing into the bottom corner from the edge of the six yard box to give a little cheer to the travelling Arabs. A minute later Ryan Dow replaced Flood as United pushed forward trying to salvage something, but it proved all in vain.