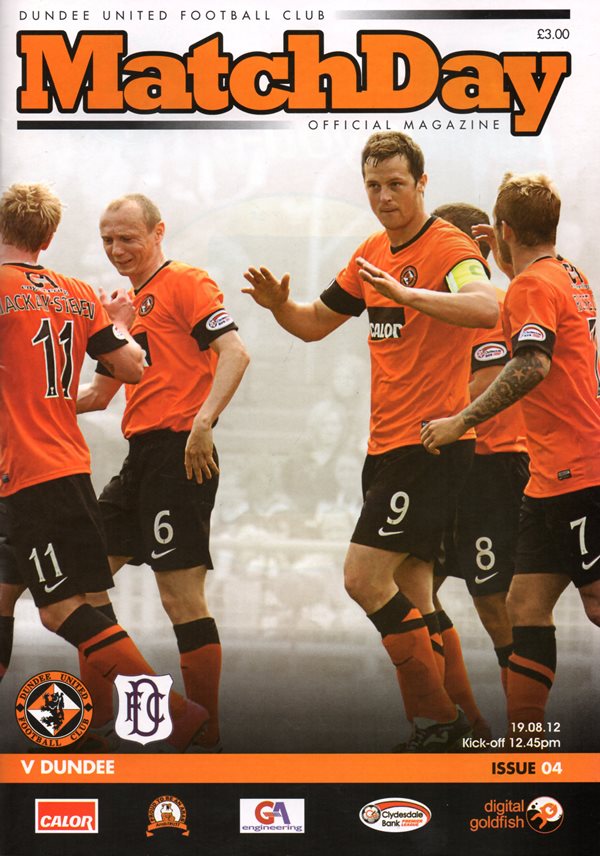 A suitably packed Tannadice Park was the setting for the first competitive meeting between United and city rivals Dundee since 2005, with a close to capacity crowd in attendance for perhaps the most eagerly anticipated game of the season so far. Despite suffering a heavy defeat from Dynamo Moscow in their previous fixture, the Tangerines went into the match as firm favourites with bookies, pundits and punters alike following an encouraging start to their domestic campaign that saw Hibernian vanquished 3-0 in the opening game of the season. The Dark Blues had marked their return to the SPL with a credible, hard-fought draw at Rugby Park, but made the short trip across the road aiming to atone for a dispiriting 2-0 home defeat to St Mirren the following weekend. United boss Peter Houston made two changes to the side that lost in Russia, Sean Dillon returning to the centre of defence in place of Brian McLean, and Michael Gardyne, making his full competitive debut, in for the injured Gary Mackay-Steven. Dundee manager Barry Smith welcomed back former United midfielder Stephen O’Donnell and wide man Nicky Riley to his starting eleven.

The game kicked off in typically frenetic fashion, with both sets of fans in good voice, and with United attacking towards the visiting Dundee fans in the Shed. But it was the Dark Blues who created the game’s first opportunity, John Baird forcing a terrific double stop from Radoslaw Cierzniak in the third minute after good work by Riley on the right. Indeed, an energetic and confident away side belied the form book by dominating the early proceedings, with the Terrors looking nervous at the back. Despite the Dees’ positive start it was United who took the lead. Johnny Russell won a free kick on the left after drawing a foul from Kyle Benedictus on the edge of the penalty area. Willo Flood’s set piece evaded everyone bar Gavin Gunning, and the defender headed home from the six yard line to put the Tangerines 1-0 up after 14 minutes. The goal appeared to settle a hitherto anxious home side, and United began to dominate possession in the middle of the park and offer a more incisive threat in attack. Russell in particular was causing the Dundee back-line concern with his industry, pace and trickery. In the 27th minute John Rankin attempted the spectacular following a quick counter attack involving neat link up play from Jon Daly and Russell, but the midfielder’s Colombian-style scorpion kick went wide of Dundee ‘keeper Rab Douglas’s left-hand post. The game had by this stage settled down following the charged and chaotic opening exchanges, but with the action bogged down in midfield and with little in the way of goalmouth action. But in the 35th minute the Dundee goal was breached for the second occasion, Johnny Russell putting the Terrors 2-0 up. Rankin received the ball from Daly in midfield and drove for 30 yards towards a retreating Dundee back four, before finding the United striker in acres of room in the box. Russell’s shot took a deflection of a Dark Blues defender before flying past Douglas to give United a real foothold in the game. Three minutes later it was 3-0. The home side broke with lightning pace following a Dundee set piece on the edge of United’s penalty area. Barry Douglas freed Johnny Russell on the right and the striker was again given far too much time and space, before unleashing an unstoppable drive from 30 yards that flew past the Dundee ‘keeper high into the top corner of the net. The United fans were in party mood now, and to chants of ‘we want ten’, United saw out the remainder of the first half confident in possession, with the deflated Dark Blues relieved to hear referee Calum Murray blow for half-time.

United kicked off the second half in similarly dominant fashion, and five minutes after the break Daly almost made it 4-0. The United captain was left unmarked at the back post, and his header looked goal-bound until Douglas made a fantastic low save to keep Dundee’s slim hopes alive. In the 58th minute John Rankin tried his luck from 30 yards, but his well struck shot went several yards over the crossbar. United created again after 65 minutes, with Daly just failing to connect with a deft Russell cross from the right hand side. A by-product of United’s commanding lead was that the pace of the game began to slow, but the match exploded into life in the 71st minute with a double sending-off. Russell and Dundee captain O’Donnell tangled in the middle of the park, and Calum Murray saw fit to issue a straight red card to each player to put both teams down to ten men. The dismissals recharged the atmosphere, both on and off the park, with the subsequent period bearing witness to some meaty challenges as emotions ran high. United, though, again began to take a grip of the game, controlling possession and making the away side chase the ball for lengthy spells. Dundee, however, continued to make valiant attempts to penetrate the United rearguard, applying pressure to the Tangerines’ defence without genuinely troubling Cierzniak. In stoppage time Rankin again tried his luck from long range, but Douglas in the Dundee goal held comfortably, and United saw out the match with ease to ensure the three points and bragging rights stayed at Tannadice.