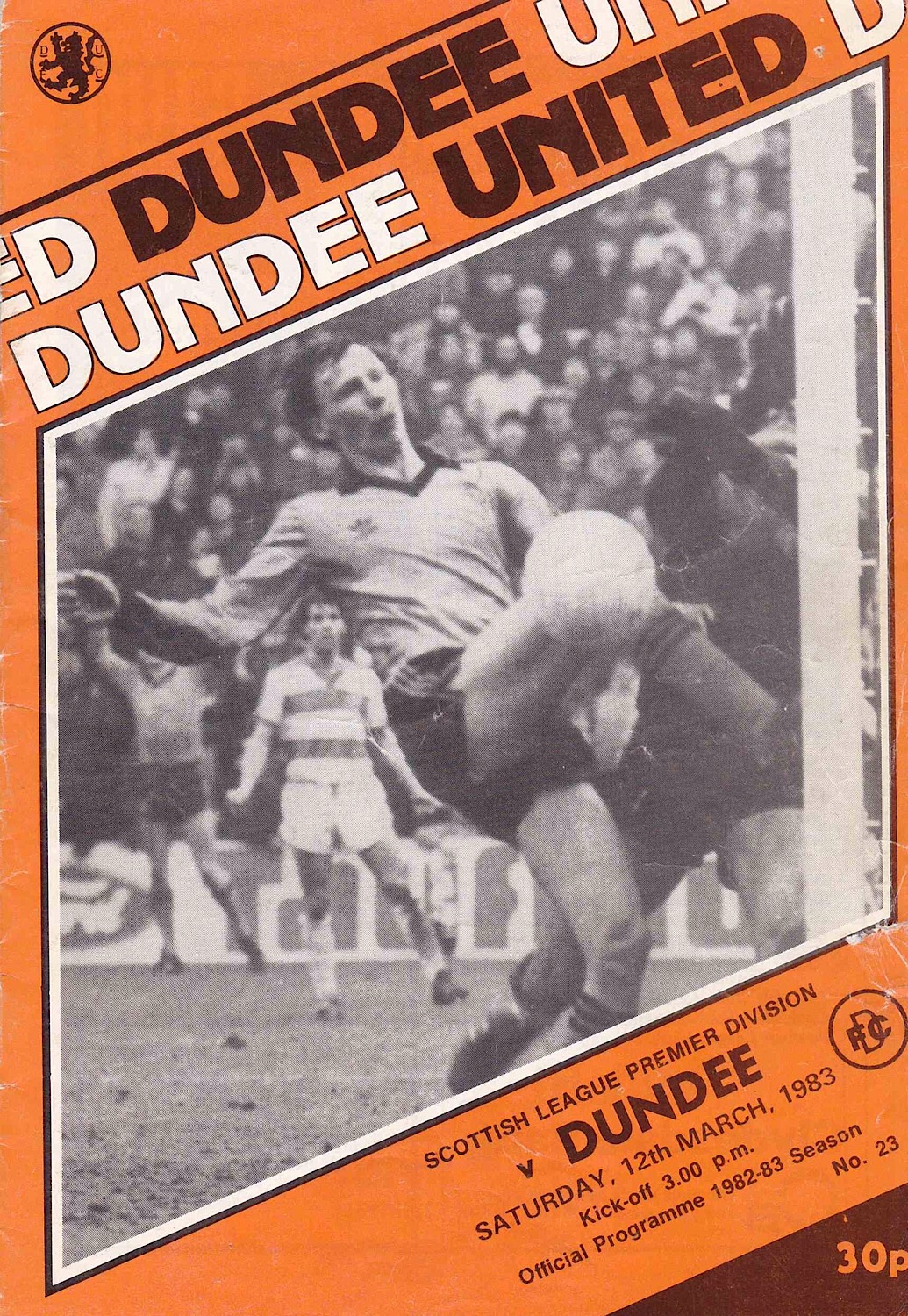 Early March brought an exciting Tannadice double header to United fans. Dundee were first up for the tangerines followed by the second leg of their UEFA tie with Bohemians of Prague. Secure in mid-table, the Dark Blues manager and former United 'keeper Donald Mackay had suggested pre-match that United may have their focus on the European tie. Mclean had suggested that this was a must win as they searched for their first ever championship.

The match got off to the worst possible start for the away side when goal-keeper, Bobby Geddes, picked up an injury after just 6 minutes and had to leave the field. Midfielder Brian Scrimgeour had to take his place in goal. The Dundee defence protected their rookie 'keeper for long periods following the substitution. However, their resolve finally broke after a half hour. United defender Richard Gough drilled home an unstoppable shot after a corner was not cleared effectively. Dundee were not without their own chances though, but failed to trouble Hamish McAlpine. As half-time approached, Ralph Milne fired one into the side netting from a promising position and the score remained 1-0 at the interval.

Dundee's sub goalie Scrimgeour was at fault for United's second early in the second half. An Eamonn Bannon corner was touched on to the crossbar by Paul Sturrock and with the 'keeper slow to react, Richard Gough was unchallenged and headed home the rebound. Within two minutes Dundee were back in the game. Gough went from saint to sinner when he was penalised for holding Eric Sinclair in the box and Ian Ferguson netted from the resultant spot-kick. In the minutes that followed a number of players found their way into the book and the game raged from one end to the other. Dundee then equalised with what can only be called a freak goal. AAlbert Kidd rounded Bannon in the United box and lashed in a shot which McAlpine should have dealt with. However, the ball evaded him, hit the post and then hit the 'keeper before rolling into the net. Then, before United could come to terms with what happened, against all odds the Dens men went ahead. Cammy Fraser lashed the ball from 25 yards and it soared beyond McAlpine and struck the net. Dundee's sudden burst of energy had take United by surprise but they were in no mood to feel sorry for themselves. With 10 minutes left, McLean replaced Milne with Reilly who had netted six times this season already. The striker waited just three minutes to make it seven. John Reilly scored with a crisp shot from the edge of the box which Scrimgeour let slip under his body. The momentum now switched in United favour and Paul Hegarty got his team in front again, turning in Bannon's cross at the far post. Sturrock almost made it five with just a few minutes left when he volleyed off the bar. In the final minute Davie Dodds sent a bullet header into the net when he got on the end of a Kirkwood cross. McLean commented after the game, "I was satisfied with the end product but not the overall performance. Our passing and general build-up play deserted us and our below par display almost gave Dundee victory."

This afternoon we host the fourth meeting of the season and whilst we have emerged victors on the three previous occasions, none has been in as convincing a manner as I would hoped. Dundee certainly have shown a vast improvement this term, particularly defensively, the exception last week's match with St Mirren. Nobody needs to remind the players of the importance of today's match considering that we are the outsiders of the three horse title race. It has been a very difficult season in which to win the title with both Celtic and Aberdeen constantly producing outstanding performances as, indeed, we ourselves have done. Having said that I viewed the Morton match with total disbelief, bearing in mind that we had so much to play for, so it was good bounce back with a fine European performance, even if the defence was caught napping when the Czechs scored. On a quagmire of a pitch we looked the fitter side, making the staleness of the Morton performance even more perplexing. Then again last Saturday, we played well for the last hour after a sluggish start. I feel that we have demanded too much from too few players this season. Whilst still seeking player swaps and new faces, we must rely on our younger players.

Unfortunately, the importance of all our fixtures this term has meant it has been difficult to blood some of our up-and-coming players. One criticism that can be levelled at me, is my reticence to field anything other than my strongest and most reliable eleven. Alex Taylor, John Reilly, John Clark and Dave Beaumont have all suffered on this score, but there comes a time when these players must face challenges at a higher level if they are to progress. Derek Murray is another. He has matured tremendousjy recently, but with Maurice Malpas, and Richard Gough, both_U21 caps, at full back, his progress, like others, has been blocked. One area in which we are lacking is a midfield player of exceptional abilities, Dave Narey has the qualities but not the attitude to fulfil this role repeatedly. So it is even more important than ever we unearth such a player through the ranks. To this end I will give youth a fling as soon as our title hopes mathematically vanish, though to be honest, i would prefer that my current policy doesn't have to alter, and we maintain our title interest right to the last kick of the season.