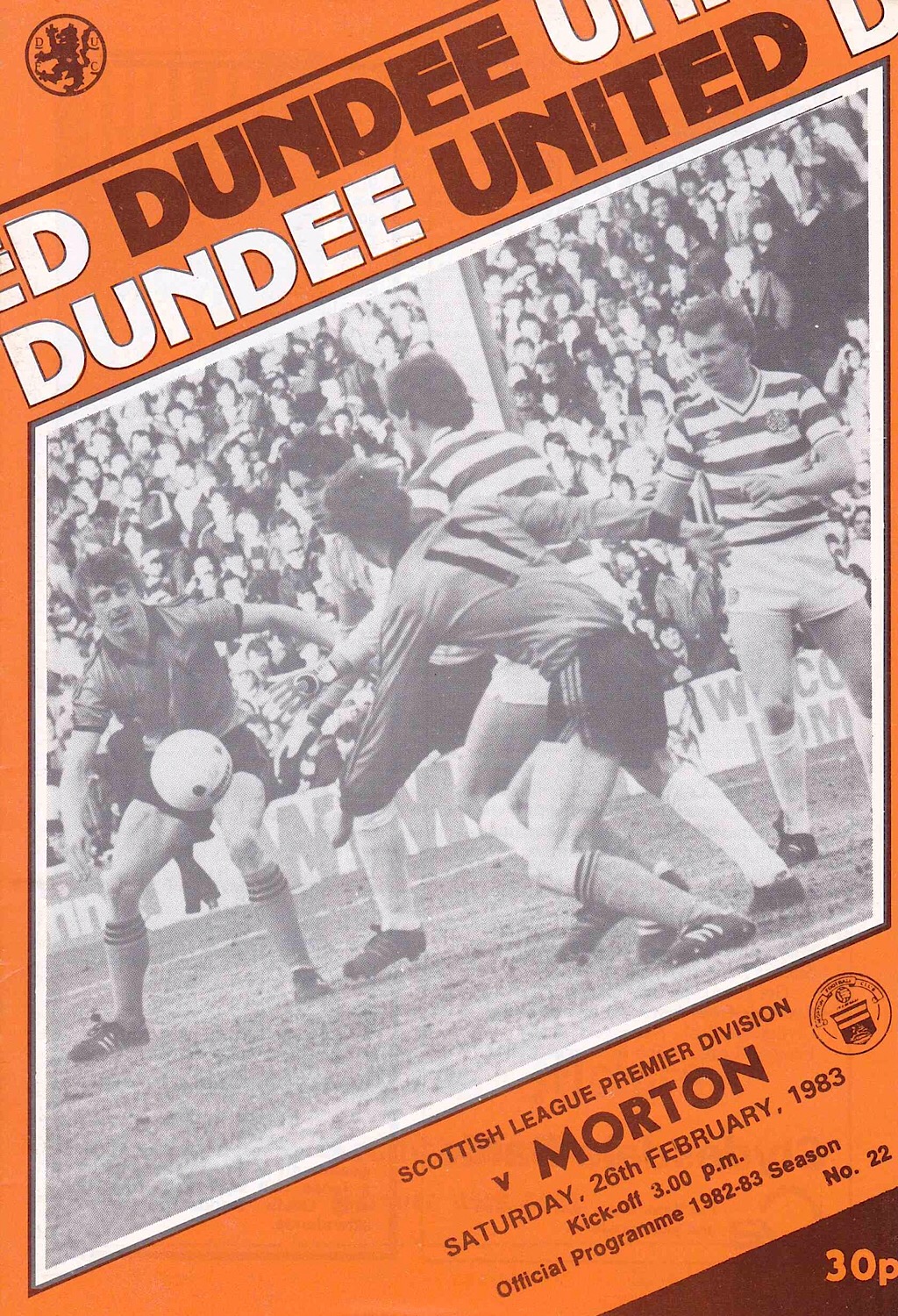 Having not played a competitive match for two weeks - with last weekends vital rearranged match versus Celtic being postponed due to a frozen pitch at Parkhead - United went into this match with two changes from their win over Kilmarnock a fortnight ago.

Derek Stark came back in for Iain Phillip, and Ralph Milne came in for Billy Kirkwood. Relegation threatened Morton had two familiar faces in their line-up, with long serving midfielder Graeme Payne out on loan at Greenock, and John McNeil, who spent a month with United as part of that loan deal, now back in the Morton team. The first half was a bit of a non event. Neither side was able to fashion a opening and the match became somewhat of a midfield battle.

The second half perked up a bit and both sides looked more interested in finding a way to goal. Richard Gough put United ahead in 56 minutes but a fighting Morton eleven equalised through Bobby Hutchinson nine minutes from time. The Terrors were now five points adrift of Aberdeen at the top, with one game in hand. However that extra game was the twice postponed clash with second placed Celtic in Glasgow. The result was a set-back in United's push for the title.

One of last weekend's national Sunday newspapers carried a report that the only reason our top players are stilt at Tannadice is due to a lack of cash in the transfer market South of the Border. Comments of that nature are an insult to what we have been trying to achieve at the club. Firstly the directors hava made it club policy to retain our top players. That policy was formulated before I became a member of the board and I am grateful to them because they ignored my advice ! In recent years bids totalling well over £1,000,000 have been made for three of our top players. The directors, fortunately, over-ruled my recommendations for acceptance. The second reason I resent last weekend's Press comment is that you, the fans, have played your part. The continuing growing volume of support has gone a long way to substantiating the directors decision to hold on to our playing assets. The transfer market may be in recession but I could guarantee offers for several of our players merely by lifting the telephone. When quality players are concerned, cash will always be available, and make no mistake that is exactly what we have at Tannadice. I have to confess my own thoughts on this matter were wrong in the past and the directors were right but now I have joined their club I am hopeful that the club's top players will continue to display their skills in United's colours for a long time to come. No doubt, like many of you, I felt peeved at having only academic interest in last week's televised cup draw. It is some time since we have been eliminated from a cup competition at such an early stage, circumstances I trust that will not be repeated in the near future.

Last Saturday we took advantage of a blank fixture date by playing our old friends West Ham. The match, I felt, proved me right concerning the tackle from behind. Both our meetings with the Hammers this season gave the paying public full value for money. In each case, freed from the threat of the dreaded tackle from behind, both sides have played flowing end-to-end football and consequently produced first class entertainment. After today's match with Morton our thoughts will turn to next Wednesday's U.E.F.A. tie with Bohemians. During the week I watched our Czech opponents beat their city rivals Slavia Prague 2-1 and whilst conditions made it difficult to make a proper assessment they have more than their share of talented players and could be the best side we have meet in the competition so far. Incidentally, a word of warning to all those intending travelling to Prague, the temperature there was minus 10, so remember to pack gloves, hats, scarves, extra jumpers and thermal underwear if possessed.