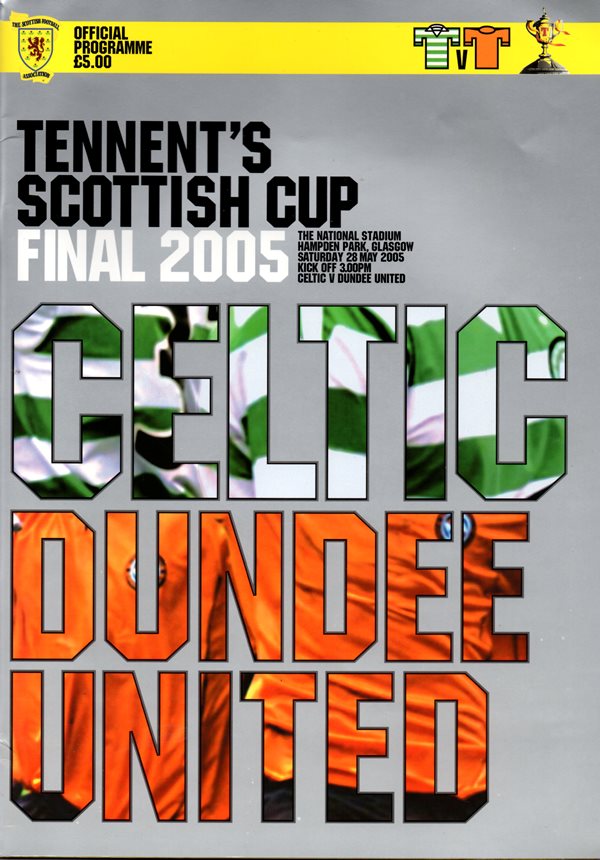 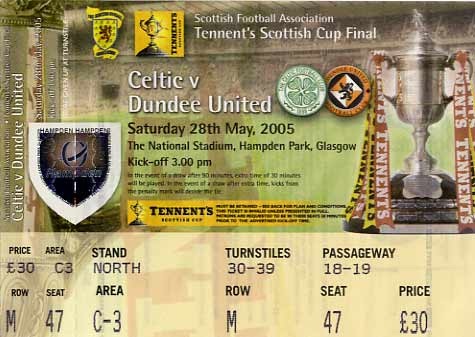 Gordon Chisholm’s side were given a major boost prior to kick-off when Paul Ritchie was declared fit to play, and the Scotland international took his place in the United rearguard. Other than Ritchie’s inclusion, there was only one other change to the United side which started last weekend’s match at Inverness, with Jason Scotland coming into the starting eleven for the suspended Jim McIntyre.

Other than long-term casualties Stephen Pearson and John Kennedy, Martin O’Neill had a fully fit squad to choose from, and there were no surprises in the side he named.

Celtic took the lead in controversial circumstances in the eleventh minute. When United’s first passing move of the game broke down on the edge of the Celtic area, Celtic countered quickly, releasing Bellamy down the right flank. Alan Archibald had kept with the Celtic forward, though, but was seemingly penalised for taking the ball away from the Welshman on the left edge of the penalty area.

Alan Thompson took the free kick low, across the face of goal, and the pace of the strike took it beyond the reach of Bullock and into the far corner.

United responded well though, and Scotland started to influence the play, first releasing Crawford with an incisive through ball which ran just too far on the greasy surface for his strike partner, then making a good run behind Varga in the 18th minute and putting in a dangerous low cross in front of Douglas, but Crawford was just unable to make contact six yards out.

United’s Paul Ritchie picked up the first yellow card of the afternoon in the 31st minute, after being sucked in by the pace of Bellamy, only for the Welshman to show a change of pace as the challenge came in.

Celtic started the second half again at a high tempo, and in the 49th minute, Bellamy turned Kenneth on the left touchline and surged forward before squaring in the area for Hartson. With the big forward set to score, Archibald threw himself in the way heroically to deflect the shot over the bar.

Following a good challenge by Kerr which stopped another Bellamy run, United broke forward, and after linking with Mark Wilson, Stevie Crawford put in a cross which was turned behind by Balde for a corner. From Robson’s corner, McInnes nodded back into the danger area at the far post, but Archibald shot over from a difficult position.

The tricky Robson then earned a free kick on the edge of the area after a foul by Lennon. Although Wilson’s shot was cleared, this led to a couple of minutes of incessant pressure on the Celtic goal, but agonisingly the clear cut chance wouldn’t come for United.

Celtic should have sealed the victory in the 85th minute when Bellamy when down in the area under the challenge of Garry Kenneth. Chris Sutton stepped up to take the kick, and slipped before contact, scooping the ball tamely over the bar. That was to be the last chance of the game and United returned home empty handed.

Manager Gordon Chisholm will hope this shows signs of promise for next season’s campaign in the SPL and Uefa Cup.