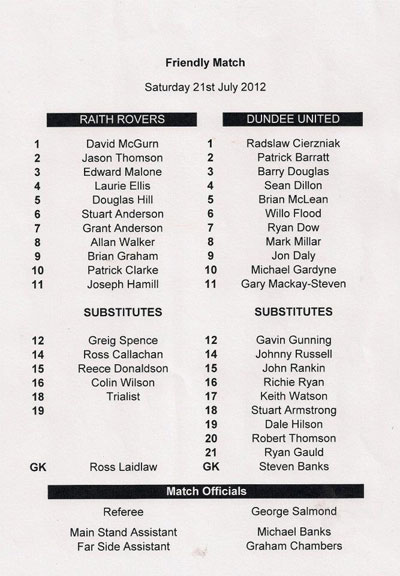 Salubrious conditions greeted United in Fife as the Terrors travelled to Kirkcaldy for a pre-season friendly with Raith Rovers, the sun making a belated and much welcomed appearance at Starks Park.

The 800 or so Arabs in attendance were looking for another encouraging performance from the Tangerines following spirited and sprightly showings against Dundee and Everton, the season proper looming ever nearer with a date with Dynamo Moscow just around the corner. Rovers were aiming to once again test themselves against SPL opposition following credible draws with Ross County and Motherwell, and a 3-0 defeat to Hearts.

United boss Peter Houston introduced some fresh faces to the starting eleven, with new signing Mark Millar and youngster Paddy Barrett making their full debuts. The Fifers began in impressive fashion, playing some intricate passing football and taking the game to the United rearguard. Five minutes in, Alan Walker was the first to test Radoslaw Cierzniak in the United goal, but the United number one was equal to the Raith midfielder’s shot from 10 yards. A minute later Grant Anderson tried his luck from 25 yards, but the ball travelled well wide of the goal.

After that initial spurt of action, the game fell into something of a lull, with the central areas seeing most of the ball as both midfields battled to take control of proceedings. That lapse in goalmouth action was broken in the 21st minute when Barry Douglas tested the Raith goal with a well executed free-kick from 25 yards, but McGurn parried wide for a corner.

United were now beginning to dominate possession, with Gary Mackay-Steven and Ryan Dow looking lively on each wing. In the 31st minute Jon Daly cracked a half volley from the left after Mackay-Steven crossed from the opposite flank, but McGurn saved comfortably.

Two minutes before half time the home side were forced into a substitution when defender Dougie Hill was replaced by Reece Donaldson.

The second half kicked off with a determined home side well on top, and in the 49th minute Raith took the lead. A direct ball from Jason Thomson penetrated the United defence, and Brian Graham showed good strength to hold off a challenge and great composure to beat Cierzniak to the ‘keeper’s right with a terrific finish from ten yards. Four minutes later Rovers almost scored again. Pat Clarke found space in the box to fire a fierce drive at the United goal. Cierzniak blocked, but the Raith striker managed to regain possession before shooting over the crossbar from close range.

A minute before the hour mark, substitute Armstrong found space in the Raith penalty to have a strike, but his deflected shot flew wide for a corner. Sixty seconds later Daly met a Dow cross from the right, McGurn doing well to touch the United captain’s header over the bar.

In the 63rd minute Keith Watson came on for debutant Paddy Barratt, and a minute later Raith defender Laurie Ellis tested Cierzniak with a neat drive following a corner from the right, but the keeper made a good save low to his left. The substitutions continued to pepper the action, and with twenty minutes to go Houston sent on Gavin Gunning and John Rankin for Barry Douglas and Willo Flood.

With quarter of an hour remaining Graham almost grabbed his second, his run evading the United back four, before the striker tested Cierzniak with a low drive from just inside the box. Three minutes later, Brian McLean’s header from a corner went wide of McGurn’s left-hand post. With 10 minutes remaining Johnny Russell elected to try his luck from all of 30 yards, but his effort travelled well wide of the Raith goal.

United were finishing the game in determined fashion, eager to earn at least a share of the spoils, but finding a resilient Raith defence difficult to beak down. But with four minutes left on the clock the Terrors equalised. John Rankin found time and space on the left hand side to drive a terrific cross ball towards the back post that evaded everyone bar Keith Watson, before the United defender expertly redirected the ball low past McGurn to make it 1-1.

And in injury time United completed a remarkable comeback to win the game 2-1. John Rankin earned the away side a corner when his fierce drive was touched over. McLean met substitute Ryan Gauld’s set piece with a fine header that sailed into the top corner of the Raith net to give the Tangerines the win.