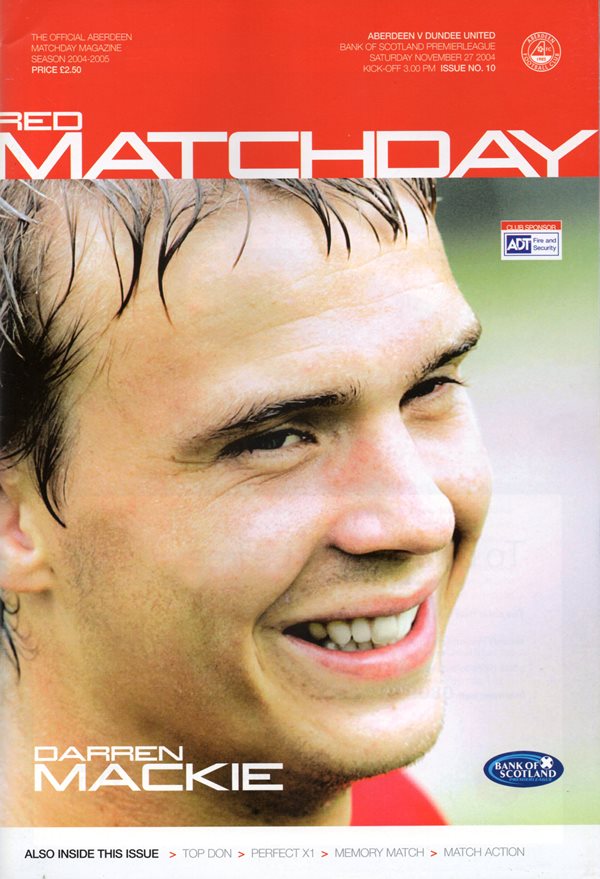 On a soaking wet day in the Granite City, the result matched the nature of the weather for United this afternoon, with a Steve Tosh goal the only entry on the scoresheet at Pittodrie. Apart from a ten minute spell at the beginning of the second half, Ian McCall’s side looked to struggle to create any meaningful pressure on the Aberdeen defence, which looked to cope relatively comfortably even without their suspended skipper Russell Anderson.

The goal came from a neat one-two between Tosh and Richard Foster, before Tosh – only in the side due to an injury to Chris Clark – stroked a good shot into the far corner well beyond the reach of Paul Jarvie.

Ian McCall made two changes to the side which got a point against Inverness at the same ground in midweek, with Stuart Duff and James Grady coming into the side at the expense of Billy Dodds and Jason Scotland.

For the home side, manager Jimmy Calderwood made two enforced changes to the side which beat Livingston in their last match. Phil McGuire came in for the suspended Russell Anderson, and Steve Tosh came back into the side to replace the injured Chris Clark.

The weather was anything but ideal for football, the drizzle of before kick-off turning into a torrential downpour for the start of the match.

Both sides started the game without any real spark, and the first twenty minutes passed without any serious goalmouth action. The limit of Jarvie’s activity in that time had been only to collect a couple of deflected crosses, while Wilson was the man who had the only opportunities for the Terrors, but his long range shot and close range header were both comfortably dealt with by Preece.

The Dons came into the game more after the first twenty minutes, and Whelan was presented with a great opportunity to break the deadlock after 23 minutes. Tosh crossed from the right, and the ball dropped to Whelan six yards out right in front of goal. His first effort was blocked, but the ball fell back to the former Leeds and Middlesbrough striker, and after appearing to control the ball with his arm, he fired over the bar when he really should have done better.

Despite that let-off, it wasn’t long before Aberdeen took the lead. After a 26th-minute Tosh corner which had initially come to nothing, the ball came back across to the midfielder on the left touchline. He played a neat one two with Foster inside the penalty area, and collected the ball 13 yards out on the angle, before firing an unstoppable shot into the far corner.

Grady came closest to scoring for United in the first half. He met Robson’s corner only a minute after the Aberdeen opener, but his header flew just over the bar.

Other than that, the Tangerines didn’t look like levelling before the break, and indeed the most potent threat came from the home side, with Heikkinen firing wide from 22 yards after a neat interchange with Tosh. The home fans were roused from their seats when McCracken thwarted Mackie’s run on goal, but referee Dallas deemed the defender’s challenge to be completely legal.

United started brighter in the second half, with Grady’s header a minute after the break coming off the back of McGuire for a corner. Within the next few minutes, both McInnes and Robson worked the goalkeeper from the edge of the area.

Robson picked up the first yellow card on 54 minutes, when Dallas judged him to have gone down without need to.

Ritchie did well defensively on 55 minutes, getting back to clear from Mackie after a long through ball into the area.

Both sides made substitutions after 62 minutes, Craig coming on to replace Tosh for Aberdeen, while Kerkar was introduced by Ian McCall in place of Robson.

Whelan came close for Aberdeen on 64 minutes, with his chip from the edge of the area only a yard too high.

Wilson almost opened up the Aberdeen defence on 74 minutes, but with McIntyre, Diamond and Preece all converging on the cross, the young defender played the ball off the United forward, and was lucky to see the rebound go wide.

The Tangerines put together their best attacking move with eleven minutes left, Kerkar moving inside and passing to Scotland – who had replaced Grady – on the left side of goal. The Trinidad international cut the ball back, and Brebner just missed the cross ball, with the midfielder claiming he had been impeded in his run. Wilson fired the loose ball over the bar from the right angle of the area.

After that, United failed to create any further meaningful chances inside the final ten minutes. With the visitors looking devoid of creativity, it was Aberdeen who came closest to scoring, when Craig was just too stretched to make connection to a cross from the right.

Adams and Foster were both cautioned for the home side in the closing stages.

Apart from a ten minute spell at the start of the second half, United really failed to create any meaningful chances, and the Dons defence never looked like being overstretched. Having said that, Aberdeen themselves were far from their best, but in truth they still came out of this match as relatively comfortable victors.