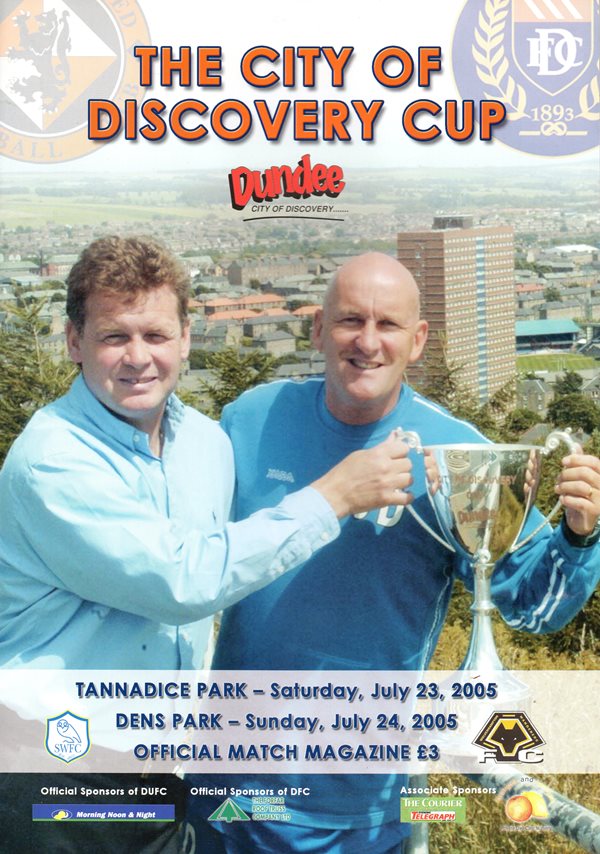 Dundee United won the inaugural City of Discovery Cup this afternoon, coming from a goal behind to defeat Sheffield Wednesday in a game in which the English side had looked more threatening for the most part. Earlier in the day, Wolves thumped Dundee 4-0 to take third place in the tournament. Trialist Swedish goalkeeper Rami Shaaban stepped in between the posts, while the side was captained by Assistant Manager Billy Dodds, who played as sweeper. Sheffield Wednesday, managed by United legend Paul Sturrock, also made changes, as both teams featured a handful of players who had only limited first team experience for their current clubs.

Wednesday opened the scoring after 37 minutes when Hungarian midfielder Zoltan Vasos put in a deep cross from the left which dipped over Dodds, and Lee Peacock was able to control and smash his shot into the roof of the net from 8 yards. Burton O’Brien and Whelan both had chances to double the lead in the following minutes, while the closest United came was from the second of two late corners, when first Samuel had a shot blocked, and then Kenneth headed over.

The second half began with Wednesday continuing to dominate possession. However, United sprang into action in the 56th minute, when Collin Samuel found himself one on one with goalkeeper Chris Adamson, who managed to block the Trinidad & Tobago international’s shot. The ball was only half-cleared though, and it fell to Barry Callaghan, who shot just over. A goal followed for United on 59 minutes when Patrick Collins got the final touch on a James Grady effort, after the United striker had beaten the offside trap. Trialists belonging to both sides were central to the action on 72 minutes, when Richie Partridge’s long range effort was well tipped wide by Rami Shaaban.

Chris Brunt had a good chance to put Wednesday back in front on 82 minutes, but he sent his shot wide left. United also came close two minutes later, when a long free kick into the Owls’ box fell to David Goodwillie, who showed good composure before placing a shot low towards the far corner, but Adamson turned it behind. However, the resultant corner produced the winner for the Tangerines. Samuel played an outswinging corner into the box looking for Kenneth, but Lee headed clear. The ball was played back in though, and Garry Kenneth was found unmarked, with the big central defender powering a shot low into the far corner, to secure the win and the Cup.

Manager comment: "It's great to win something and I'm really pleased for the young boys, they did so well. We've used our whole squad over the weekend and the fans have had the chance to see the quality of player we're bringing through."