A first half winner from Manager Craig Brewster – his first United goal for ten years after leaving for Ionikos – gave United a narrow but deserved victory over Danish First Division side Herfolge.

Mikkel Christoffersen’s opener following a poor clearance by Barry Robson had given the home side an early lead, but a neat finish from Steven Robb and an opportunistic strike from Player-Manager Brewster gave United the victory.

One of the trialists with the team this week – full back Lindsay Wilson – was given a chance to demonstrate his ability with a starting place. Stuart Duff moved into central midfield alongside Mark Kerr, and William Easton came into the side on the left flank. Craig Brewster started himself alongside Noel Hunt. The other trialist with the squad, Danish full back Jeppe Hestehave, started the game on the bench.

The team, therefore, in 4-4-2 formation was Stillie in goal, behind a back four of Wilson, McCracken, Archibald and Robson. Steven Robb started on the right of midfield, with Kerr, Duff and Easton alongside him, with Hunt partnered by Brewster up front.

Herfolge’s line-up contained Nigerian international Justice Christopher and Lithuanian international Auri Skarbalius. The Danish First Division side, also in 4-4-2 formation, started with captain Morten Cramer in goal, behind a back four of Frederiksen, Skarbalius, Petersen and Christoffersen. Christopher was anchoring the midfield alongside Christian Nielsen, with Pedersen and Christensen on the left and right respectively, and a front pairing of Hamre and Rynell.

The game started quite evenly, and after Robson did well to intercept Rynell’s cross in the 6th minute after Hamre’s cutback, United went to the other end and Hunt’s shot from the edge of the area was deflected into the goalkeeper’s arms.

Danish Under-20 international Martin Christensen was looking sharp early on for the home side, and he was to be involved in the opening goal, as Robson dispossessed him wide, but played a weak clearance which was picked up by right back Mikkel Christoffersen, and Herfolge’s new signing charged into the area on the angle and clipped a powerful shot into the top left hand corner beyond the advancing Stillie.

The end to end nature of the opening stages was to be demonstrated again six minutes later, when United equalised seconds after seeing Herfolge hit the post. Rynell picked up a loose ball 25 yards out for Herfolge, and from the left angle of the penalty area, shot across Stillie; luckily for United, the effort cannoned back off the far post and the rebound was put wide from the free kick.

Straight from Stillie’s restart, United equalised as Robb ran on to the ball behind the Herfolge defence, sidestepped the goalkeeper on the edge of the area and kept his composure to roll the ball into the empty net between the two defenders from 18 yards to score his first goal for the club.

United’s equaliser seemed to have given them the impetus, and within a three minute period midway through the half, Brewster chipped wide, Duff saw his long range effort go wide, and goalkeeper Cramer had to spring to catch Brewster’s header from Easton’s cross.

The manager’s influence on the game was growing, and he was the man to put United into a deserved lead on 29 minutes. Wilson played a free kick from half way towards Brewster, and his flick on found Hunt in the area. The former Dunfermline man’s shot was blocked by Christoffersen, but the ball fell kindly for Brewster to slam the ball high into the net from six yards.

Mark Kerr did well to block Rynell’s shot on the edge of the area just before half time, just as the striker was pulling the trigger from Christoffersen’s cross.

Referee Svedborg produced three yellow cards in the first half, Brewster and Robb were cautioned for United, for a tangle with Cramer and a late challenge on Christian Nielsen respectively, while Rynell was booked for the home side for a late challenge on Archibald.

United made one change at half time, with one trialist replacing another, and Brewster giving Jeppe Hestehave the second half in place of Lindsay Wilson. Herfolge made three changes, with Jan Isaksen, Peter Benjaminsen, Anders Egholm and Steen Trager replacing Mikael Rynell, Nicklas Pedersen, Kenneth Emil Petersen and goalscorer Christoffersen.

The expected plethora of substitutions continued in the 54th minute, when Callaghan replaced Robb, before Gardiner and Conway replaced Robson and Hunt three minutes later.

Brewster was denied a second by the feet of Cramer on the hour, as the Player-Manager shot low first time from Easton’s cross, before the goalkeeper also parried Callaghan’s effort on the rebound.

Substitutions continued to disrupt the game, with the introduction for United of McLean, Kenneth, Robertson, Burnett and Abbot into the game throughout the second half.

Aside from the substitutions for both sides, the game had petered out somewhat, but with United’s team now with a large element of youth, Herfolge were looking the stronger side. Alan Archibald did well in the 67th minute to glance away Mikki Nielsen’s cross in front of the waiting Isaksen.

In the 78th minute, Garry Kenneth had to concede a corner under pressure from Nielsen, and from Benjaminsen’s set piece, Kenneth had to block on the line to keep United’s lead intact.

David Robertson had a snapshot on the turn well saved by substitute goalkeeper Christian Pedersen with nine minutes remaining, before Christensen was booked for going to ground in the area under a challenge by Kenneth.

Euan McLean had to look sharp to dive full length to his left in the 86th minute in order to get a touch to the curling 30 yard effort from Jesper Dahl, but United managed to hold out to make it two pre-season victories out of two when Archibald made a goal-line stop from Christensen’s injury time shot, before blasting clear with Isaksen bearing down on him. 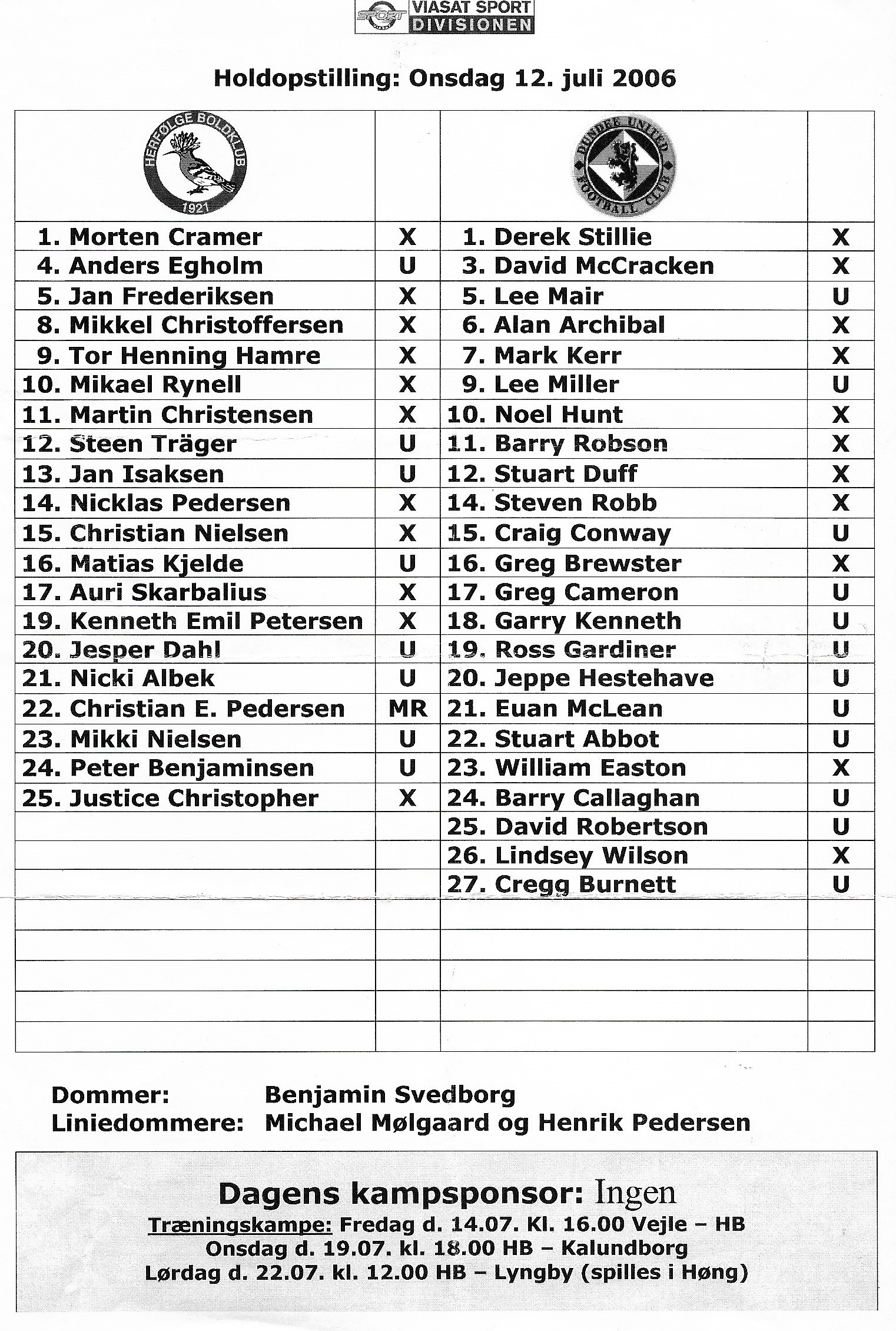