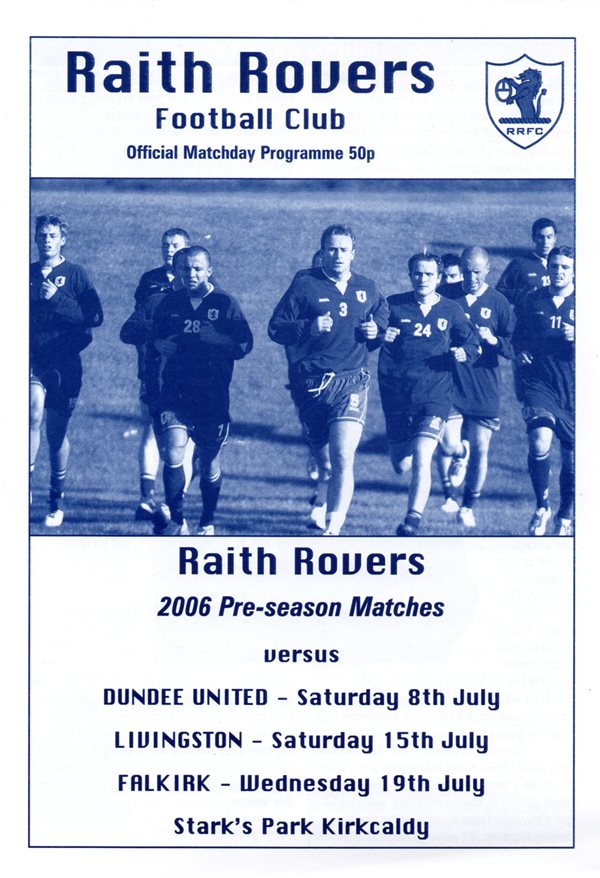 There was an encouraging start to the pre-season fixtures for United this afternoon as they defeated Second Division Raith Rovers by four goals to one at Starks Park. There were two goals for new signing Noel Hunt, and two for Lee Miller as United ran out comfortable winners in the end.

Possession looked to be the main aim for United early on, and although the Tangerines forced a few corners, there were not really any chances created at either end.

However, in 34 minutes, Lee Miller got the ball with his back to goal on the edge of the area and laid the ball off to Greg Cameron, who picked out a precision ball beyond Campbell to allow Miller to dink a shot low to the goalkeeper’s left to open the scoring.

Steven Robb almost became the first of the new signings to score for United. Some persistent work from Hunt had seen the ball drop to the midfielder, but as he stretched to get his shot away, Bonar and Campbell both slid in to block on the line.

The second goal was only a couple of minutes away though, as Cameron broke forward and played another perfect pass to Hunt who fired low across the goalkeeper and into the far corner of the net.

Hunt almost got his second three minutes later, but his header was chalked off after the referee penalised him harshly for an apparent push on the defender as he nipped in front of the advancing goalkeeper.

After going in at half time with a two-goal lead, United would have hoped to build on this in the second half, but Raith were to strike only four minutes into the second period, when Davidson’s chipped free kick was well guided for the run of McManus who fired low across Stillie to reduce the deficit.

Armand One was providing a physical threat up front for Raith, and almost levelled the scoreline in the 55th minute after holding off Garry Kenneth, but his shot was saved by Stillie.

There was an abundance of second half substitutions, but in amongst them, United got two more goals as the game entered the final stages.

First, Lee Miller timed his run and leap to perfection to meet Craig Conway’s free kick in the 73rd minute, before substitute Barry Callaghan’s run and cross was perfectly guided for Noel Hunt to add a fourth in the 79th minute.

Hunt had a couple of chances to grab a hat-trick in the closing ten minutes, firstly latching onto a pass from Brewster to see his curling shot saved by Brown, and then in the final couple of minutes as he latched onto a Brewster touch but saw his shot on the turn saved by the goalkeeper once again.