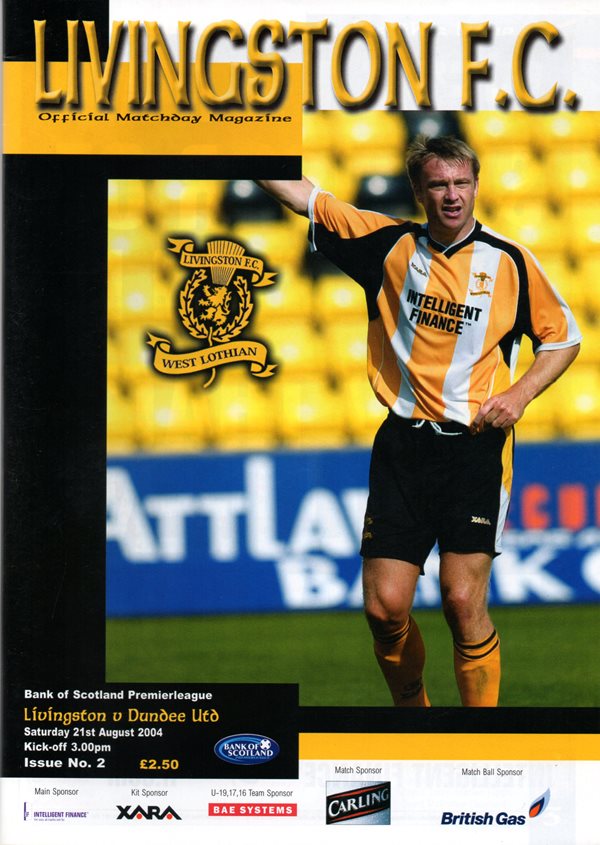 Ian McCall made three changes to the United starting line-up with Paul Ritchie given his first team debut for the Terrors. Also in the starting line-up were Stuart Duff and Jason Scotland, with David McCracken, Derek McInnes and James Grady dropping to the bench. United retained a 4-4-2 formation with Ritchie and Scotland being direct replacements for McCracken and Grady. Duff came into the right back position allowing Mark Wilson to move into central midfield. Billy Dodds took over the captain’s armband.

United opened brightly and inside the first minute a long Ritchie free kick was knocked down by Jim McIntyre for Mark Kerr, who shot over the bar. There was early disappointment looming round the corner for Unite however and it was to be a personal disaster for new signing Ritchie. After going up for an aerial challenge with Jim Hamilton in the seventh minute, the defender stayed prostate on the ground. Referee Willie Young stopped the game to allow the physio to come on, but it was clear that Ritchie had taken a serious knock. After lengthy treatment he got back to his feet, but was painfully holding his shoulder and unable to continue. The incident had many unhappy parallels with the second game of last season when Scott Patterson was seriously injured early in his United career, and was cruel luck for the Scotland international who had looked composed and comfortable when he had been called upon in the early stages. David McCracken came on as the early substitute. A clever back heel on the left from McIntyre had given Robson space to dribble into the area in the 18th minute, but he was crowded out by defenders. Brian Easton’s midfield runs were causing problems at the back for United and when Burton O’Brien made a good run into the box five minutes later he managed to square the ball for Easton, who had made up ground on the edge of the penalty area. His touch however, was poor, allowing McCracken to recover and clear the danger. Good passing interchanges brought United closest to breaking the deadlock four minutes from half time. Some good possession football in the Livingston half culminated in a powerful Barry Robson shot on goal from 25 yards, which cannoned back off the post. Billy Dodds met the rebound but his effort from an acute angle was deflected wide.

Ian McCall made a slight change in tactics at half time, with Wilson moving to a wide midfield position and Kerr moving inside. It was Wilson who almost gave United the perfect start less than twenty seconds after the restart, finding himself in space having received a pass from Robson, and curled a left-footed effort from twenty yards which dipped only a foot over the junction of bar and post with Roddy McKenzie beaten. With an hour on the clock the visitors were given the chance to open the scoring. As Livingston tried to gain some release of the pressure building on their goal, they were quickly dispossessed in the midfield, and the ball was passed back to Duff in plenty of space in the United half. The full back played a first time ball wide in front of Wilson allowing the United man to break forward at pace down the flank. As Goran Stanic closed him down, he looked up to see Scotland showing for him on the edge of the box and played the ball into the striker’s feet. Scotland controlled the ball and then turned Emmanuel Dorado well, finding himself the wrong side of the striker who only had McKenzie to beat. The defender then grabbed the shirt of the United man in desperation leaving the referee with no option but to award a penalty. Billy Dodds stepped up to take the kick, and the United captain tucked the ball into the bottom corner, the placement beating McKenzie, who had gone the right way, to give the visitors the lead. Falling behind seemed to stir Livingston, who started to appear as an attacking force for the first time in the half. A through ball into the United area found its way to Derek Lilley, but his shot was blocked well by the legs of Bullock. Scotland continued to impress for United, and with nine minutes remaining, he broke down the right and crossed deep to the far post where sub Andy McLaren was unmarked, but he could only head wide from the angle of the six yard box. Had the winger managed to double the advantage the game would have surely been beyond the hosts. Livi however managed to capitalise on the reprieve and it was United’s nemesis for the week who proved the instigator. O’Brien passed the ball into the area from the left flank and found Lilley, whose initial shot was touched onto the post by Bullock. The ball broke back to the Livi striker though, and he managed to knock the ball into the path of Colin McMenamin, who put the ball into the net from close range. Deep into injury time the Terrors almost nicked the points, when McLaren knocked down Wilson’s deep cross, and McIntyre shot on the turn, but his effort from 10 yards was deflected onto the top of the bar.