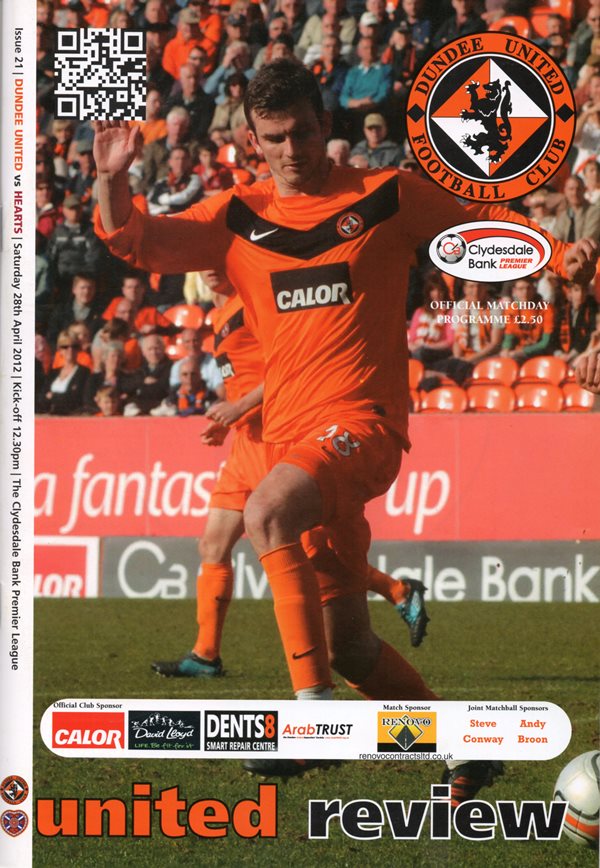 United welcomed Hearts to Tannadice aiming to continue a remarkable run of form that had saw the Terrors move within just three points of third placed Motherwell as the race for Champions League football entered a fascinating final stretch. Hearts, with a Scottish Cup final against fierce rivals Hibs to look forward to, also harboured European ambitions, but Paulo Sergio’s men knew a win for the home side would just about make United’s lead over them insurmountable. Gavin Gunning was posted missing due to a shoulder injury picked up at MacDiarmid Park last weekend, with Garry Kenneth deputising in defence. Hearts fielded a strong side, with Jamie Hamill the only notable absentee from their starting line-up.

Hearts created the game’s first opportunity, winning a corner from the right after three minutes. Ryan McGowan met the set-piece at the back post, but in somewhat unconvincing fashion, and the ball went past for a goal-kick. United were looking livelier though, dominating possession in midfield and playing some intricate passing football, but chances were few and far between. In the 11th minute the home side tested Hearts ‘keeper Jamie MacDonald for the first time. Willo Flood sent a free-kick in from the left, and Jon Daly rose highest to win the header, but MacDonald saved comfortably to his left-hand side. Three minutes later Johnny Russell fired a shot from just inside the box, but again MacDonald held with relative ease. The game was being played in refreshingly carefree fashion, with both sides eager to attack. A sensational passage of play from Gary Mackay-Steven after 22 minutes brought the home fans to their feet, the winger deftly lifting the ball over successive Hearts defenders, once with his knee, before Darren Barr was booked after stopping the United wide man with some degree of cynicism, not least illegality. Three minutes later Paul Dixon’s powerful shot from 25 yards flew wide of MacDonald’s left-hand post. United took the lead in the 32nd minute, with Willo Flood scoring his first goal for United since 2007, and in some style. A loose header from Hearts right-back Ryan McGowan was picked up by the United midfielder in the middle of the park, and from well over 30 yards from goal the Irishman unleashed an unstoppable low drive past MacDonald to put United 1-0 up. The lead was to be a brief one though, with Hearts equalising just three minutes later. McGowan, somewhat at fault during the build-up to the opening goal, made amends by sending a cross into the United penalty area that wasn’t dealt with effectively by the home defence. Rudi Skacel ultimately won a header and the ball sailed past Dusan Pernis before settling in the left-hand corner of the United net. Hearts now appeared rejuvenated, and a minute before half-time Darren Barr tried his luck from 25 yards, but his well-struck drive went wide of the post. And in added time the away side again threatened, with Grainger’s cross-come-shot from the left flank causing some concern in the United defence, before referee Willie Collum blew for a free-kick to United. Half time: 1-1.

The second half continued in a similar vein, with both sides anxious to go in front, but neither keeper was sufficiently tested until Grainger’s bending free-kick in the 54th minute, which Pernis did well to touch round the post. From the resulting corner, Zaliukas rose unchallenged to send a header just over the crossbar from eight yards, and the Lithuanian defender perhaps should have hit the target. The away side now appeared more confident and enjoying the territorial advantage, and Skacel almost scored his second in the 61st minute. Andy Driver evaded the United rearguard to reach the by-line, and his cross was met by the head of Skacel, before Pernis made a good save low to his left. But it was United who regained the advantage, with Gary Mackay-Steven putting United 2-1 up after 65 minutes. Flood’s low corner from the right, United’s first of the afternoon, evaded everyone before eventually arriving at the feet of the United winger, and his low drive travelled through a congested penalty area before beating MacDonald to give the Terrors the lead for the second time in the match. Hearts should have made it 2-2 after 79 minutes. The Jam Tarts broke quickly from a United corner, and Santana found substitute Templeton in the box. The diminutive attacker found space and time, but his shot from eight yards struck the top of the crossbar and flew over for a goal kick. But four minutes later the equaliser came, and it was another sensational strike. Substitute Arvydas Novikovas jinked past the United defence on the edge of the box, before firing a fierce drive into the top right corner of the United net. The final chance of the afternoon fell to United with two minutes remaining. A long throw from the right from Robbie Nielson caused panic in the Hearts defence, and the ball fell to John Rankin 10 yards from goal, but the United midfielder’s low strike flew wide of MacDonald’s right-hand post to ensure the game finished all square. 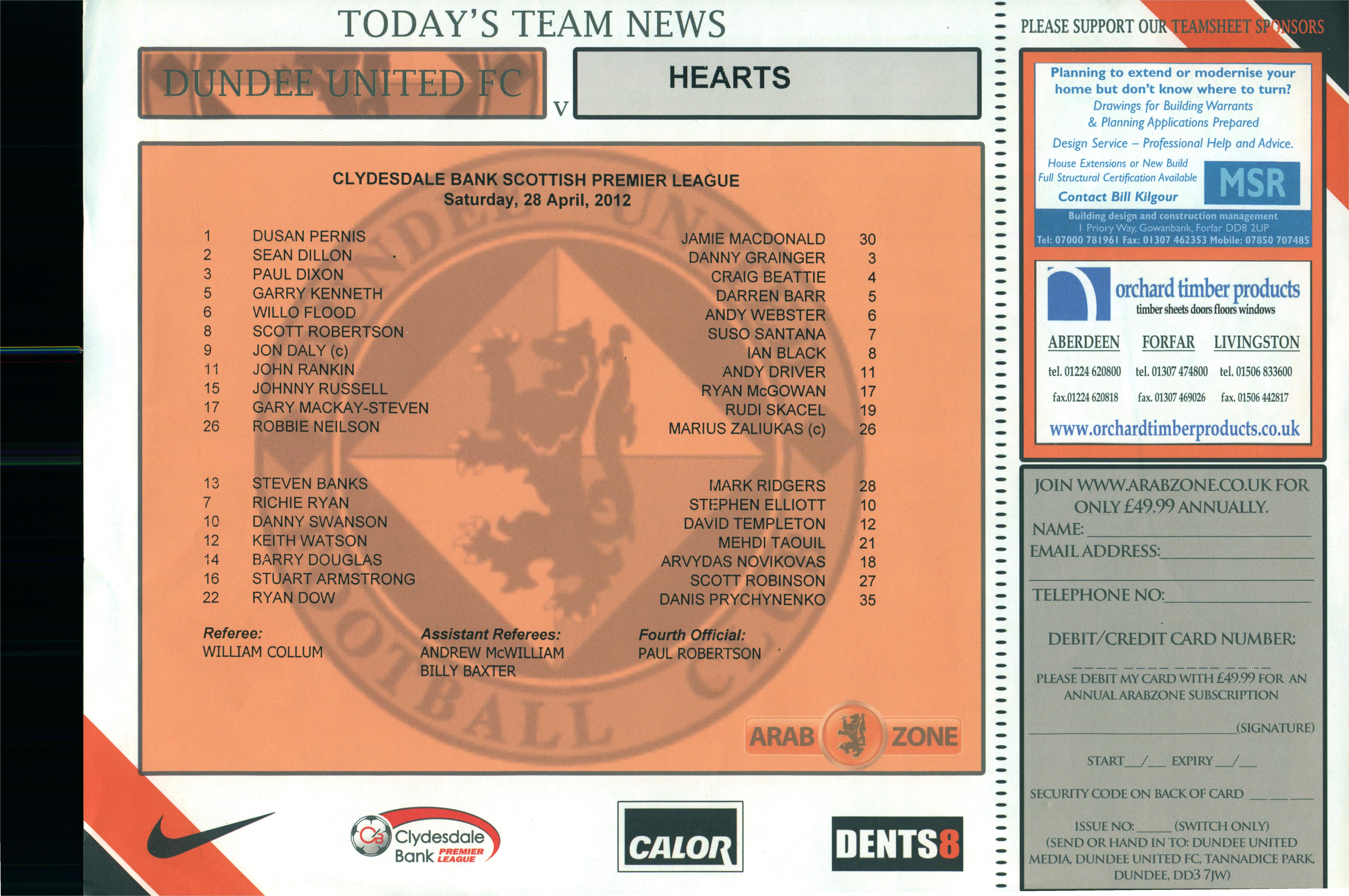 With the small squad of players we have, getting into the top six was the first priority this term. The magnificent run that we have been on for the last three months secured that and although third place and a Champions League slot remains a possibility, for the moment, maintaining fourth spot is the only thing that matters and a win this afternoon would be a terrific boost to sealing that. Our last home game was very much a game of two halves. I Apart from the first five minutes, I felt that we pretty well don't think we played particularly well in the first half, but controlled the rest of the game. We were much improved after the break, And once again we had to look to our captain Jon Daly to produce the goods with a double. His first early in the second half dug us out of a hole with a brilliant acrobatic effort. In between Scott Robertson was on target, so in the end it was a great three points to extend our run of straight wins to six games. Unfortunately that came to an end at Aberdeen and in disappointing fashion. Given how well the players have been performing, I think we can forgive them one blip. So as we headed into the first game after the split at Perth last week, I was looking for a reaction to the Pittodrie defeat and certainly got that! Apart from the obvious satisfaction of picking up three points, the 2-0 win was also pleasing for two other reasons. With Scott Robertson and John Rankin on target both our goals came from midfield players, showing that we aren't always having to rely on the strikers and we kept a clean sheet. After disappointing our big support at Aberdeen, I was delighted that we were able to reward our fans at McDiarmid. It is never easy there because Saints have a big pool of players and are an experienced outfit.

So with that win moving us into a Europa League slot, it is all about keeping the run going. I class Hearts whom we meet today as difficult a game as we have of the four remaining games. They have a big and good squad of players as they have shown by reaching the Scottish Cup Final. Therefore, they'll have players looking to get into the cup final team, not to mention trying their best to claim a European place before their Hampden date with Hibs. I know we have done well against them this season, but all three matches which we won were very, very close games and ones that could equally have swung the other way. And although Hearts come here on the back of a 3-0 defeat to Rangers last week, the result was harsh on them especially as they missed a penalty to get them back in the game at 2-0. But these things happen sometimes in the euphoria of reaching the cup final and I expect there'll be a reaction from the Hearts players this afternoon. So there can be no grounds for complacency and the players must ensure that they continue to work as hard as they have been doing.