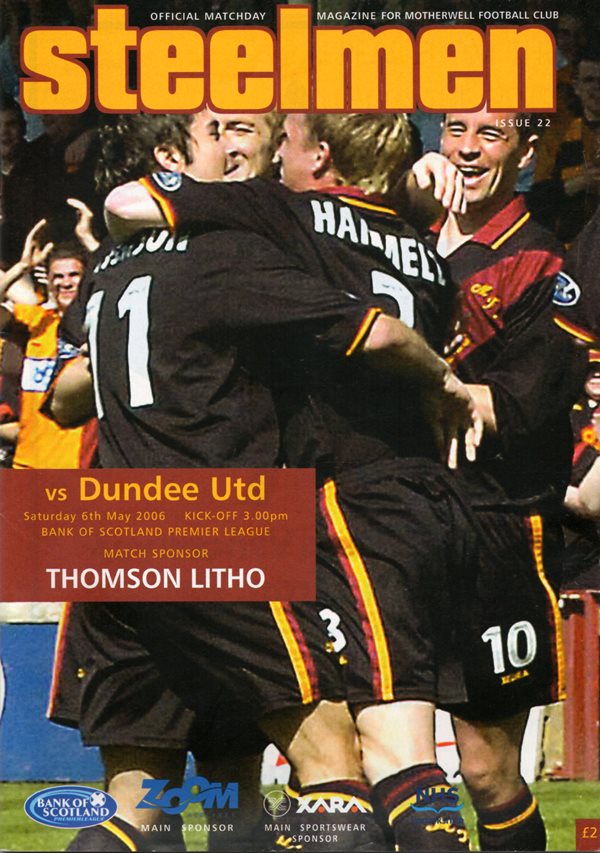 Collin Samuel’s late equaliser, along with Dunfermline’s defeat by Inverness, meant that United finished a difficult season in ninth place. A Jim Hamilton strike, immediately following his penalty being saved by Samson had given Motherwell the lead, but Samuel signed off before the World Cup by holding off the defender and striking beyond substitute goalkeeper Colin Meldrum late on.

Craig Brewster made only two changes to the side which started the midweek game against Dunfermline, with Barry Robson returning from suspension to replace Stuart Abbot, who dropped to the bench having picked up a foot knock on Tuesday. The other change saw Lee Miller replacing Collin Samuel.

The home side – also playing in 4-4-2 formation – contained five changes from their previous match against Livingston, with the return of Martyn Corrigan, William Kinniburgh, Steven Hammell, Alan McCormack and Phil O’Donnell.

The first half had a distinct end of season feel to it, although both sides created half chances inside the opening ten minutes. Jim McIntyre stabbed a shot wide at the front post from Robson’s right wing cross, before Martyn Corrigan did likewise from Jim Paterson’s left wing cross for the home side.

Motherwell were forced to make two substitutions through injury within a minute in the first half, with Corrigan staying down after a goal-saving McCracken challenge and being carried off, while goalkeeper Graeme Smith had failed to shake off a knock taken in a challenge by Lee Miller from a Barry Robson free kick.

Minutes after Smith left the field, United were denied by the woodwork for the umpteenth time this season. Barry Robson’s cross field ball was headed back across the area by McIntyre, but Lee Miller – at full stretch – couldn’t quite get above the ball and his header bounced off the top of the bar with Meldrum beaten.

The second half started a little brighter than the first, with both teams seemingly keen to get some shots on goal. Mulgrew and McIntyre shot over the bar from the edge of the area, while Miller found the goalkeeper’s arms with a close range effort after the Motherwell defence struggled to clear a corner.

At the other end, former United winger Paterson had two shots, the first a weak effort from long range which was comfortably saved, while his second was blasted wide across the face of goal from sixteen yards.

The opening goal came just on the hour, after Mulgrew was penalised for a foul on Quinn as the two ran into the area. Jim Hamilton stepped up to take the penalty, but despite Samson doing brilliantly to turn the ball onto the post, the ball ran back across the face of goal. Kevin McBride only just managed to stop the ball running out for a corner beyond the other post, and his flick back inside found Hamilton sliding in to turn the ball into the net.

The goal seemed to give the home fans and players a lift, but Robson almost levelled the scoreline four minutes later. After turning Hammell inside out thirty yards from goal, he fired a left foot shot which dipped and curled onto the roof of the net.

With conditions becoming much more difficult in the torrential rain, Brewster made his three substitutions, bringing on Samuel, Goodwillie and also William Easton for his debut, and after Samson had contained the deficit at one with a good block at the near post from Paterson’s shot, it was Easton’s brightness which seemed to spark United into life.

After a low cross which just Miller in the middle, Easton collected the ball on the left again and came inside to fire a low shot on target which was parried well by Meldrum.

With news that Falkirk had taken the lead, United knew that a goal would be needed to retain 10th position or stand a chance of moving up to 9th position in the final table. It came with four minutes remaining when Collin Samuel latched on to Robson’s flick on, and held off the challenge of Donnelly before shooting beyond Meldrum into the far corner.

Indeed, there were chances to pick up the victory in injury time, with Goodwillie not quite connecting with Samuel’s cross, before Samuel broke clear on the left and shot from a difficult angle at Meldrum instead of an easy square ball for the unmarked Goodwillie in the middle.