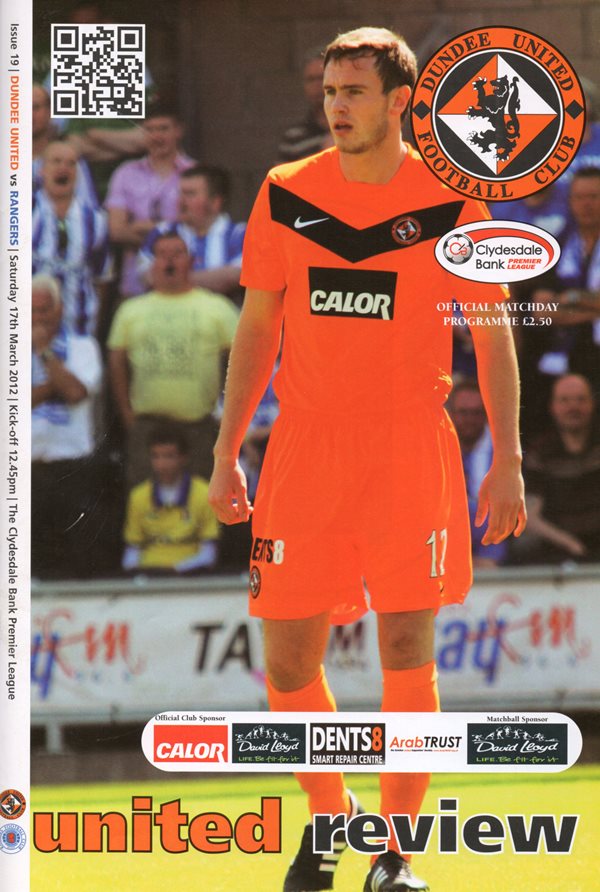 A salubrious spring afternoon saw United welcome Rangers to Tannadice for a televised lunchtime encounter and the Terrors went into the match eager for redemption following a disappointing Scottish Cup defeat to Celtic the previous weekend. United Manager Peter Houston made just one change to the starting line-up, with Keith Watson replacing the suspended Robbie Neilson at right back. The crowd was not as large as would normally be expected for a United - Rangers clash at Tannadice as the away support was significantly diminished due to a partial boycott by the Ibrox club's supporters.

The game kicked off in somewhat tepid fashion, with neither goalkeeper called into action during the opening ten minutes. Rangers though were looking lively and the Gers were the first to threaten. Andrew Little freed Steven Davis on the right in the 11th minute and the Rangers midfielder fired a shot to Dusan Pernis’s left, but the United ‘keeper was equal to the shot, parrying wide at the expense of a corner. The opening quarter was blessed with an abundance of endeavour but littered with misplaced passes, with craft and guile unfortunately marked absent. United though were beginning to dominate possession, but finding it difficult to penetrate a resilient Rangers rearguard. However, the away side continued to offer the more potent attacking threat, and Salim Kerkar looped a header over the bar in the 28th minute after a cross from the left. Kerkar was again making a mark on the action six minutes later, escaping several United challenges to find space in the box, before poking the ball past the encroaching Pernis, but the ball rolled well wide of the ‘keepers left hand post. And yet it was United who opened the scoring, with a rocket from the right foot of the returning Keith Watson giving United the lead in the 37th minute. Paul Dixon found Jon Daly’s head with a long throw into the Rangers penalty area, before an unconvincing Rangers clearance fell to the unmarked Keith Watson on the edge of the box. The United full-back composed himself before unleashing an unstoppable half-volley high into McGregor’s top left corner to send the home crowd into raptures. Rangers looked for an immediate response and two minutes later Mitchell had a shot deflected wide of the goal following an intricate passing move involving Davis, Edu and Little, with the resulting corner ultimately cleared by the United defence. However, Watson’s goal seemed to have instilled life into the hitherto below-par home side, and it was a much-improved United who forced a further two corners before referee Winter called time on the first half.

United started the second half keen to double their advantage, and indeed they did just that within the first two minutes of the second half. Gary Mackay-Steven’s skilful artistry skinned the Rangers full-back McCabe on the left before the United winger sent a low cross into the box. Jon Daly managed to nose in front of the Rangers defence to fire past McGregor from six yards to give the home side a commanding 2-0 lead. The Tangerines were now well on top and seemingly creating chances at will, with the Rangers defence looking increasingly fragile. Goal-scorer Daly looked to test McGregor again shortly after following excellent link-up play from Mackay-Steven and John Rankin on the left, but the Irishman’s header from Rankin’s cross sailed just inches over the crossbar. However, Rangers hauled themselves back into the game in the 59th minute when excellent play from substitute Sone Aluko made it 2-1. The Rangers wide man showed great skill to jink past the United defence on the right-hand side, before his cross come shot took a deflection off Rankin to loop over Pernis and into the United net, with Rankin unfortunately awarded the own goal. The second half was frenetic with the action raging from end to end, and Rangers now appeared rejuvenated by their goal. Alejandro Bedoya tested Pernis from 25 yards after 66 minutes following a quick Rangers counter-attack, but the United ‘keeper made a comfortable save to his left. A minute later United almost made it 3 – 1. A long free-kick found Gavin Gunning unmarked in the Rangers penalty area, and his header into the six-yard box ultimately fell to Johnny Russell, whose fierce shot was deflected over the bar by the head of Lee McCulloch. Rangers failed to effectively deal with the subsequent corner, and the ball eventually arrived at the feet of Sean Dillon whose brilliantly executed half volley from 25 yards flew just over McGregor’s crossbar. A reinvigorated Rangers were striving desperately for an equaliser, with the impressive Aluko’s pace and invention offering a potent threat on the wing, and United were encamped deep in their own half. However, the Gers were restricted to long balls and set pieces, and despite several desperate clearances from the United rearguard, Pernis was relatively untroubled in the United goal. With 11 minutes remaining Rangers midfielder Maurice Edu was lucky to escape the referee’s attention after appearing to throw an elbow at Scott Robertson, but Brian Winter deemed that no action was required. Rangers continued to look for an equaliser but made little headway, and not until injury time did they seriously attack Pernis’s goal. Andrew Little was presented with a chance to make the score level, finding room in the United box, but his volley flew several yards wide of Pernis’s left-hand post. Rangers continued to press, but a resolute United defensive display saw the Terrors see out the 90 minutes in relative comfort to claim their second victory over Rangers in six weeks. Daly’s goal early in the second half proved to be critical, with United sealing back-to-back victories over the Gers for the first time in over a decade. The Terrors have probably played better against Rangers in the past and lost, but a combination of resilient defending and clinical finishing at crucial periods in the match earned United the three points.

Disappointing as it was to go out of the Scottish Cup last Sunday, we have to remember that it was to a Celtic side that are the best team in Scotland right now. Undoubtedly the sending off of Robbie Neilson was the pivotal point of the match. Robbie had already had a yellow and it was a challenge inside the Celtic half that he didn't need to go into. People will argue that he jumped with his arm up. The referee deemed it to be a straight red and we just have to deal with that. He was distraught but we battled on regardless and don't blame Robbie for us losing the game, even though it would have helped to be 11 versus 11. What made it so frustrating was that up until his dismissal, the chances were coming from us rather than them. In many ways, we were on the front foot and dominating the game. But we did exceptionally well in the last 15 minutes of the first half when down to ten men and with 20 minutes to go, Milos Lacny had a great chance to equalise. So to still be only a goal behind at that stage was great and the disappointment was that the final 4-0 score line was such a sore one because of the third and fourth goals.
I think we have got to give our guys a lot of credit because if we play like that against most other teams we'd have a good chance of winning. Because the side has been doing so well changing the team is not easy.

The good thing is that we do have competition for places. The likes of Keith Watson, Barry Douglas, Richie Ryan and Milos Lacny have had to be patient as they wait their chance. I have spoken to all four and explained the situation. Keith Watson was a bit unlucky suffering a bit of a dip in form and Robbie Neilson stepped in and has done exceptionally well for the team, but Keith might now get another chance with Robbie's suspension. Barry Douglas went in against Hearts and did exceptionally well, but Paul Dixon's performances have been very good. Another player in the same category is Ryan Dow, who I have been holding back a bit. He played in a bounce game against Falkirk earlier this week, scored and did exceptionally well. But what I have said to him is that if we can consolidate top six and see where we are I'll give him a shot before the end of the season because he definitely deserves it. One good thing about having the Rangers game from which we hope to bounce back from the disappointment of last week, is that again it is a big game with a big crowd behind us. Rangers may have their troubles off the park, but make no mistake, this is still a very, very tough game for us. I know they have a couple of players missing, but that only means others will get an opportunity to stake a claim in the side. Despite going into administration, they haven't lost an awful lot of players, and you never get it easy against either of the Old Firm no matter the circumstances. Consequently, we'll need to play as well as we did in the first half hour of last weekend's game with Celtic and in the same manner as we did in beating Rangers at Ibrox in the Scottish Cup if we are to get three more points towards consolidating a place in the top six.