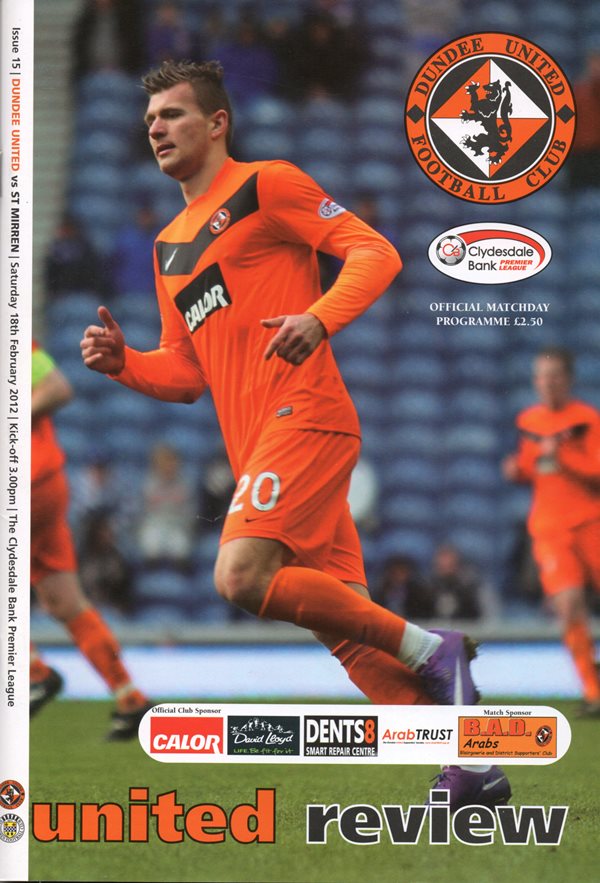 United made just one enforced change for the visit of the Buddies. Garry Kenneth could not recover in time from his groin problem so Sean Dillon stepped in. Former United man Steven Thompson missed out for the Paisley side after being sent off in midweek against Ross County.

After a slow opening period there was a loud appeal for a penalty from the home support on the eight minute mark. Daly turned well and a through ball found Armstrong who went down in the area after a challenge from McAusland but the referee waved play on. A minute later the St Mirren defender David Barron was booked for a late tackle on Mackay-Steven. Shortly before the 20 minute mark a great move down the left involving Dixon and Mackay-Steven see the latter send a great cross into the box but unfortunately there were no takers for the home side. Dixon was then involved again this time finding Daly with a cross however the big United forward was ruled marginally offside. With 26 minutes gone United won a corner on the right. United’s in-form Mackay-Steven swung in a fine cross which picked out Daly but his header just missed the target. United then should have possibly taken the lead. McAusland fouled Russell of the right and from the resulting Dixon free kick Gunning headed into the six yard box and frustratingly for Daly the ball was just out of his reach and the ball went out for a goal kick. Shortly after United threatened again this time Daly teeing up his strike partner Russell but the solid McAusland blocked his shot and the danger was once again cleared. A fairly uneventful half although everything attacking wise came from United and the Gunning header had it been on target may have provided the game the goal it needed.

Two minutes after the break United were first to try their luck again when a long left foot shot from Rankin was easily handled by Samson. Six minutes later Dixon squared a pass to Mackay-Steven who sent in another long range shot but this time the ball was well wide of the target. Former United target, Dougie Imrie then became the second booking for the visitors when he was yellow carded for dissent. With half an hour left and United struggling to break down the visitors Peter Houston brought on new signing Milos Lacny for Stuart Armstrong. St Mirren then made their first real chance of the afternoon when Carey crossed into the United box but fortunately Teale could not control and the ball went out for a goal kick. Danny Lennon then made a double substitution bringing on Hasselbaink and Mooy in place of Teale and Carey. The Buddies captain Jim Goodwin was the next man to be booked when he was carded for a very heavy challenge on Mackay-Steven. With 20 minutes left on the clock United had their best effort of the second period. The ball found its’ way to Russell at the edge of the Saints box and the Scotland International turned and fired in a great shot that Samson tipped round the post for a corner kick. Two corners resulted and with the second landing at the feet of Rankin who had a deflected shot save again by former United keeper Samson. After being the superior side all afternoon United were almost caught out by the classic sucker punch. Imrie lofted the ball in to the penalty area which Gunning left but from nowhere Hasselbaink stole in and with only Pernis to beat he somehow failed to connect and the Slovakian keeper gathered. With time running out Rankin was booked for pulling back Imrie and from the free kick Hasselbaink headed down and McGowan shot over. In the final minute Neilson crossed into the box and the ball spun out to Rankin who volleyed over the top. Although United were the superior side and had the majority of the play they looked very unlike scoring all afternoon and in the end a share of the points was about right.

Overall, I have to be pleased with the way things have gone since our last home game against Motherwell. Winning at Ibrox and McDiarmid were great results, and indeed, the only blemish of the last three games was the second half against Motherwell. That game was the last of my touchline ban and watching from the stand, I thought the game should have been over and done with by half-time. As had been the case against Aberdeen, we played really well, but didn't get what we deserved, only having a Stephen Craigan own goal to show for our efforts. But as the game went on, we went into our shell and from the stand, it was difficult to get messages on to the park as we sat deeper and deeper culminating in Michael Higdon scoring a late equaliser. Motherwell were unquestionably better than us after the break, but despite them being a very good side and flying high, it was, particularly after creating so many chances in the first half, disappointing to only take a point from the game. Next up was the Scottish Cup tie with Rangers and the lads turned in a fantastic team performance to go through. There is no doubt we caught Rangers on a bad day, but that isn't our problem, we still had to go out and do it and did so in no uncertain terms. On our previous visit to Ibrox in the league, we had plenty of chances, but didn't take them and paid the price.

But on this occasion, we set out an attacking stall and in the first half were clinical in taking our chances. Having got ourselves in front, I thought we ran out very comfortable winners in the end. Best of all was sending our very vocal supporters who turned out in such tremendous numbers back up the road happy. That should have set us up nicely for last week's local derby with St Johnstone. However, we didn't play well, particularly in the first half. St Johnstone took the game to us, and I was worried that we were going to go behind. But as it happened, we got a break when Dicker's free-kick hit Anderson and, with the keeper having come out, goes in. If I was disappointed with the performance, I was happy enough we had our noses in front at the interval. And that was also the case in the second half, when we played a lot better. Plenty of chances were created and with some clinical finishing we ran out 5-1 winners. But for me, irrespective of the winning margin, the most important thing was picking up the three points. Again our support gave us great backing and they cheered the players on which is a huge help, especially when things weren't going well in the early stages. Hopefully that win sets us up nicely for today's game with St Mirren with whom we have had some cracking games recently. Our last match against them at New Love Street in my opinion shouldn't have been played so bad was the wind, but it didn't prevent both sides serving up a cracking game. We played brilliantly in the first half, yet twice had to come from behind and that was how it finished. And Saints also led on their last visit here in August before we pegged them back. So it would be nice if we could get off on the front foot for a wee change and hold on to it! But under Danny Lennon, Saints have done well this season. They have a style of play that suits them, some good individual players like the boy McGowan up front and Jim Goodwin does an excellent job for them in midfield. All of which adds up to another entertaining contest, but hopefully, we can carry on from where we left off at Perth last Saturday.