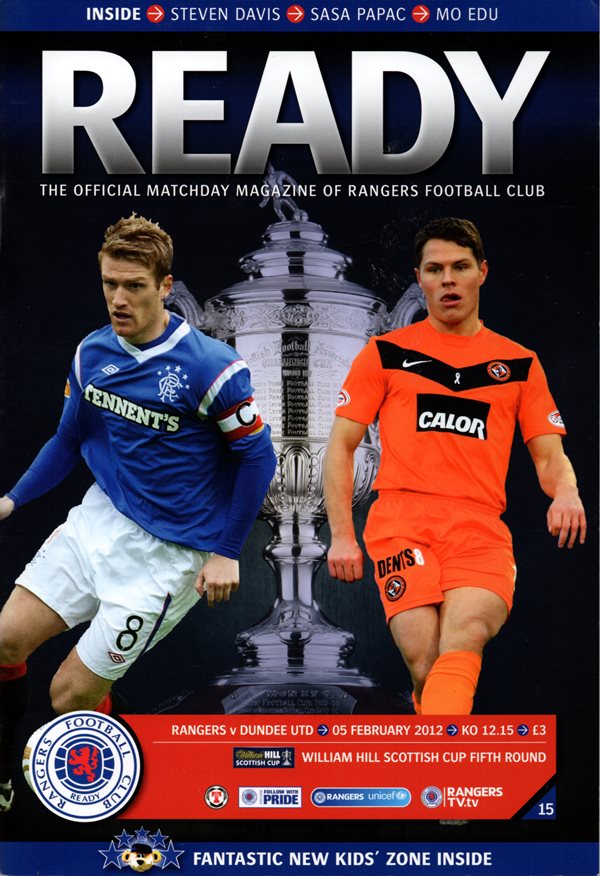 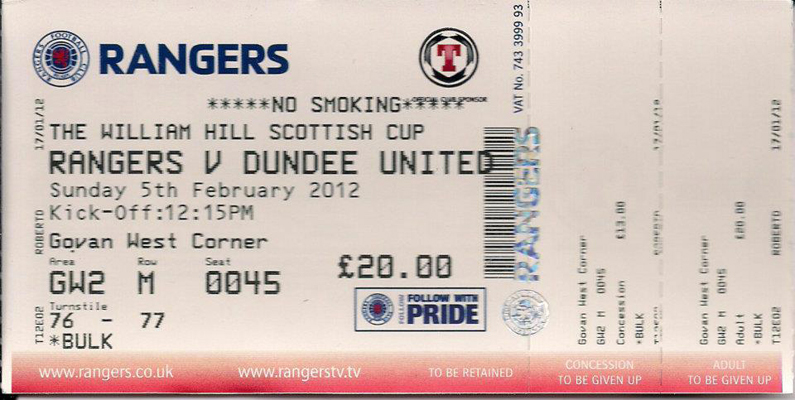 Manager Peter Houston made only one change from the side that drew with Motherwell, with fit-again Gavin Gunning coming back in and Sean Dillon dropping onto the bench. Rangers Manager Ally McCoist gave a debut to new signing Mervan Celik.

United, hoping to take advantage of a less intimidating than usual atmosphere at Ibrox where fewer than 20,000 fans had turned out for a match that was being broadcast live on the BBC, had the ball in the net within a minute, although there was little doubt that a free kick would be given when Jon Daly slid in on Allan McGregor before the ball fell to Johnny Russell to roll home. The away side, shouted on by a healthy turnout of around 1300 fans, continued to enjoy a spirited start and Daly had the confidence to try to catch McGregor off his line from near the halfway line, although the Scotland number one easily got back to save. It took 10 minutes before Rangers had a shot of note on goal, but Sone Aluko’s long-range strike rolled harmlessly past Dusan Pernis’s left hand post. United were next to threaten with Daly playing a neat ball down the right channel for Russell who cut inside but saw his effort deflected off Dorin Goian and into the arms of McGregor. After an extremely positive first quarter of an hour, United got the goal that their early play deserved after a spell where the ball ping-ponged around the Rangers box. First Paul Dixon came close when Allan McGregor had to turn behind for a corner after he fired in from long range. Garry Kenneth then nearly got his head to the resultant Stuart Armstrong corner from the right then Rankin fired in a dangerous cross from the left that McGregor needed to palm away to Armstrong. The youngster then pinged in a great cross to Gavin Gunning, who met the ball well and headed in an effort that hit off the underside of the bar and into the net. The goal galvanised the home side and they had their first shot on target soon after when Sone Aluko showed some great skills before firing in an effort that Pernis beat away. They came close again after 23 minutes when David Healy drilled in an effort from the right edge of the box that brought out a superb fingertip save from Pernis. With 10 minutes to go before half time, United stormed into an incredible two goal lead when Paul Dixon rolled the ball into Johnny Russell who lifted the ball over McGregor and into the net, sparking utter pandemonium in the United end. Rangers were shell-shocked and looking vulnerable and it took until five minutes to half time before they had another chance when Pernis easily held a Kyle Bartley header.

Rangers struggled to cause any threat in the opening quarter of an hour of the second half aside from a couple of corners, as United tried to slow down the pace of the game. United had a golden opportunity to put the game beyond doubt midway through the second half when Garry Kenneth rose unchallenged in the Rangers box but McGregor did well to save. On the next attack, it was Daly who found space in the box to meet a Dixon cross but headed over. Rangers were struggling to get into the game at all and were restricted to long range efforts that failed to trouble Pernis. With just under 20 minutes to go, Aluko did well to get a cross in from a tight angle on the right but Andrew Little, on for the anonymous David Healy, lifted the ball over the bar. United were still controlling the midfield as the game entered the final quarter of an hour and nearly snatched a third when John Rankin chested down a through ball then fired in a good dipping effort from 20 yards that McGregor did well to save. A Garry Kenneth foul 25 yards out gave the home side the chance to set up a grandstand finale but Aluko’s free kick went harmlessly over to send Rangers fans streaming to the exits. As the clock ticked down, United gave a debut to new striker Milos Lacny, who replaced the ever-impressive Gary Mackay-Steven. His first involvement he had a strong shout for a penalty as McGregor dived at his feet while Goian tussled with him in the box, with the keeper then collecting a booking. Dusan Pernis never looked troubled as United played out the final minutes comfortably, leaving the away fans to celebrate a truly historic victory until long after the final whistle.