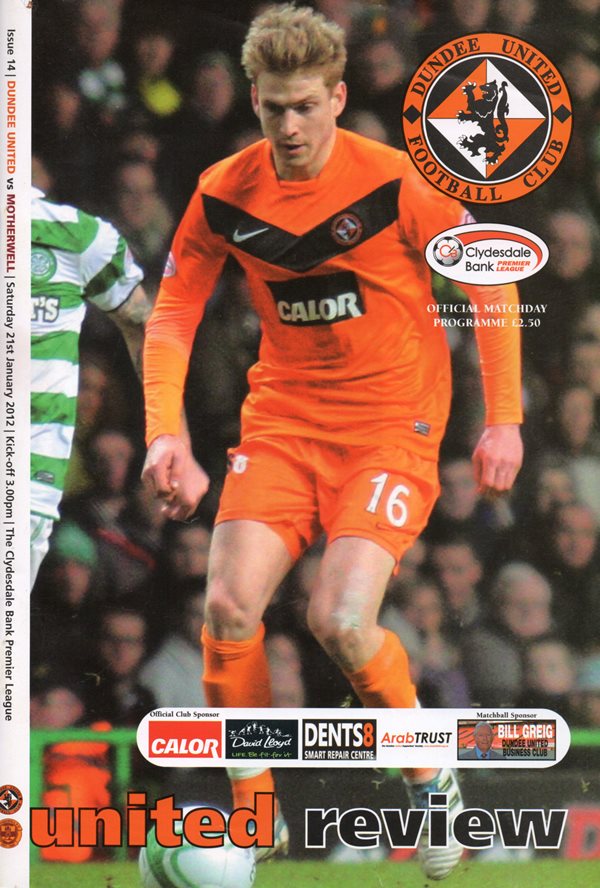 The Tangerines welcomed the Steelmen to Tannadice hoping for a vital win which would potentially lift them back into the top half of the table. On a cold and blustery day a tight game looked in prospect as recent games between the sides had been shared very evenly. United were looking to avenge a 3-1 reversal at the hands of the visitors earlier in the season whilst Motherwell were looking to halt a run of 5 games without victory. Peter Houston made just one change following last week’s narrow defeat at Parkhead, with Willo Flood dropping into the bench being replaced by Stuart Armstrong. Gavin Gunning joined Danny Swanson on a strong looking home bench as more of the squad’s injury problems eased.

The fact both sides were keen to win this was in evidence early on as first the visitors first forced a save from Pernis, who parried out a Tom Hately free kick before Gary Mackay-Steven broke clear of the Well defence following a pass from Jon Daly and drilled a fierce shot wide of the post. The next two to trade chances were Rankin, who drilled across the area after breaking free down the left only for the cross to be deflected away from the onrushing United attackers then Omar Daley, who cut inside following a pass from Higdon before shooting tamely at goal. Armstrong then sent in a cross which should have been dealt with easily but Steve Hammell let the ball bounce allowing Daly to win the ball and head over from 6 yards. The best save of the match to this point arrived with just over a quarter of the game gone and it was the hosts, starting to assert themselves, who forced the issue. Russell neatly spun away from Hately and into the penalty area before playing in Daly who teed up Rankin about 16 yards out. Shifting the ball onto his favoured left side the midfielder, who had scored in both of the last two matches, drove towards goal ensuring Randolph in the Motherwell had to react smartly to turn the ball away from the net. This turned out to be just a warning sign of what was to come as the Terrors took the lead in the 27th minute. Dixon broke down the left wing and sent a low ball into the 6 yard box which was slotted into the net from two yards out by visiting captain Stephen Craigan, under intense pressure from Russell. The visitors would have been disappointed that Higdon didn’t do better than shoot weakly at Pernis from 6 yards before Russell nearly doubled the advantage after being put through by Mackay-Steven, with Randolph again doing well to block the effort. As half time approached Daly headed a Rankin cross well wide when he would usually have gone much closer then the ever lively Mackay-Steven drove a ferocious left foot shot into the side netting, with some in the ground thinking he had just scored.

It was a very different second half as chances became scarce as the visitors tried to push United back more but were constantly met with stubborn resistance. While they enjoyed more possession Pernis was not called into action until the 62nd minute when he gathered a Jamie Murphy shot on the turn at the second attempt. Next to have a pop at goal was Hammell, who had a free kick opportunity following a harsh decision against Robbie Neilson, but the left back curled the ball a couple of feet wide. The visitors were beginning to look more and more threatening and Higdon again wasted a great opportunity when he glanced a headed off target from only 4 yards out. The hosts were defending well and again held firm as Well threatened in the 72nd minute, blocking a Murphy shot out for a corner after the ball fell kindly into his path at the edge of the box. Hately then swung in an excellent cross which Higdon headed well wide after rising to meet the ball much too early from 5 yards out. A second goal for United looked like it would seal the win and when the ball dropped at the feet of Russell in the visitor’s box he turned before shooting over the bar then inside the last 10 minutes a great interchange between Swanson and Daly finished with Rankin forcing another great save out of Randolph. At the other end Higdon had certainly been the sinner for Motherwell and when he was played in by Ojamaa in a good position he blazed wide again. Just when it looked like it may not be the striker’s day Ojamaa crossed from the left and this time Michael Higdon made no mistake 6 yards out with only 5 minutes remaining to level the match. The visitors were screaming for a penalty two minutes later as Ojamaa went down between Dixon and Gunning but it was difficult to see what either United defender did except to stand in position. Robertson had an injury time chance following a long throw from Kenneth but his spectacular attempt flew wide as the game ended all square.

It was a typical game of two halves as each side enjoyed spells of greater pressure either side of the break. United will feel that their stout defending in the second half had done enough to protect their lead but in the end their failure to grab the second goal was costly. Now with two weeks to prepare, thoughts can turn to their mouth watering Scottish Cup tie next time around at Ibrox.

Our last home game against Aberdeen was very frustrating, and one we definitely didn't deserve to lose. There is no doubt that the match was hugely influenced by two decisions that went against us. Having been by far the better side in the first half and a goal up thanks to another Jan Daly strike, we were denied what, as far as I am concerned, was a stonewall penalty. And as Considine's challenge on Johnny Russell clearly prevented a goal scoring opportunity, Aberdeen should have gone down to ten men and we might well have gone in two up at the interval with the game beyond them. Instead, Aberdeen improved after the break and got back into the game courtesy of another decision that went against us. Paul Dixon's clearance undoubtedly went out of play, off an Aberdeen player and to add insult to injury, they went on to equalise from it. There wasn't much we could do about the wonder strike that won them the three points, but it just added to the injustice of it all. Of course, my comments after the match earned me a two match touchline ban, the second of which I will sit out this afternoon, so in future I must choose my words more carefully! The following week, with several pundits predicting our trip to Airdrie as a possible Scottish Cup upset, we turned in a very professional performance to end up cruising through to the next round. Great credit goes to the players for their altitude, because even though not at our best, we still established a 2-0 interval lead and extended that to six before a bit of slackness at the back and John Boyle's side bag two late goals. And I was delighted that we were able to thank your magnificent support, which as always turned out for the cup in great numbers, with a resounding win.

Apart from the result at Celtic last week, the only disappointment for me was the manner of the two goals we lost. We started off well enough in the first ten minutes, Garry Kenneth bringing out a great save from Forster. But then we proceeded to concede what I can only describe as two very soft goals. However, the determination within the side was again evident and we only had a brilliant Forster save preventing Jan Daly to head us level. But after two defeats in the league we badly need to get back to winning ways, but so too do our visitors which should make for a highly intriguing encounter. Last time Motherwell were here they were miles better than us. It was one of poorest performances of the season and we could have no complaints about the 3-1 defeat. Last time we met it finished goalless at Fir Park and in the quite horrendous conditions that was a fair enough result. But after last week's loss to Inverness Caley Thistle - their third successive SPL defeat - they'll be like a wounded animal and desperate to get back on a winning track, so we are undoubtedly going to have our work cut out to get the better of them for the first time this season.