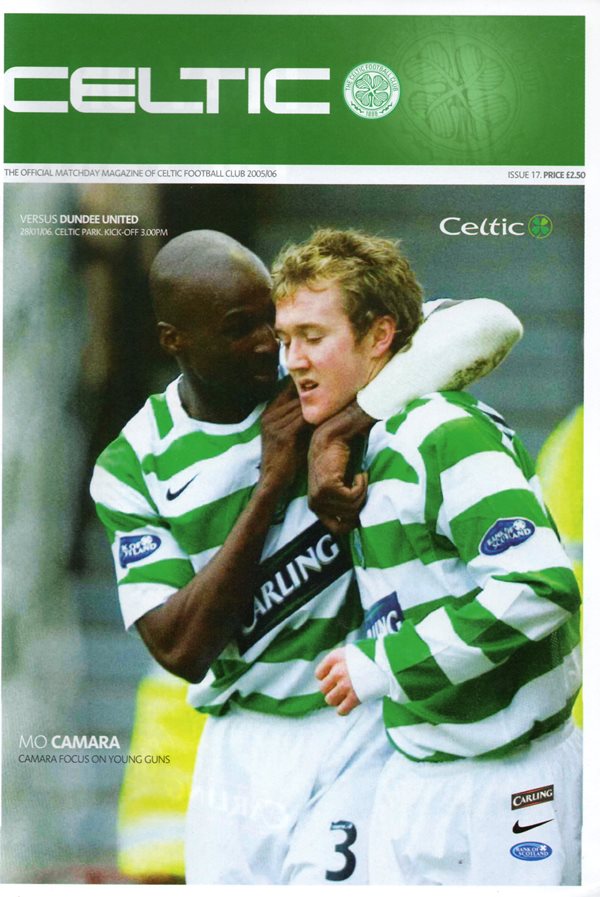 Following his transfer from Tannadice under a fortnight ago, Gordon Strachan handed Mark Wilson his Celtic debut against his former side. The only other change to the Celtic side which beat Motherwell last weekend was the reintroduction of Ross Wallace at left back in place of Mo Camara, who dropped to the bench. Following a quicker than expected recovery from his hamstring injury, Roy Keane also took up a place among the substitutes. With his own injury adding to the unavailability of the injured Paul Ritchie and the on-loan Charlie Mulgrew, Craig Brewster had to reshuffle his starting eleven for his second game in charge. From the side which picked up a point against Aberdeen last weekend, in came Barry Robson to replace Mulgrew at left back, and Collin Samuel for Lee Miller, who dropped to the bench.

Robson it was who was given an unfamiliar role at left back, but it was his attacking instincts which brought the visitors the first attempt at goal. Following a short spell of United pressure, Robson swung in a wicked cross which found the run of Brebner at the back post. The midfielder’s header across goal fell into the path of David Fernandez, whose shot was blocked at close range by Virgo. After a slow start, the home side came unto the game after that, and opened the scoring in the ninth minute. Robson was penalised for a foul on Wilson on the touchline and, from Nakamura’s free kick to the far post, John Hartson found himself unmarked five yards out and with a routine header to give his side the lead. The set-pieces of Nakamura looked to be a dangerous weapon for the United rearguard to deal with, and his corner two minutes later was glanced wide by Stan Varga. United were continuing to enjoy some good possession at times, and twice were unlucky not to find themselves level within only a few minutes of conceding. First, Robson swung in a right footed cross from the left corner, which Jim McIntyre looked to have finished with a near post header, but Boruc managed to turn the ball wide at full stretch. A minute later, and some superb midfield build up play from United saw McInnes win the ball from Nakamura, Duff and Brebner exchange passes and, with the ball crossed into the area, McIntyre could nod the ball down to one of a number of runners. He picked out Derek McInnes, and the skipper saw his low effort sail inches wide of the post with Boruc firmly beaten. Despite conceding the early goal, United looked by far the better side for much of the first half. After Wilson had a long range shot on 25 minutes which went comfortably over Stillie’s goal, it was one way traffic in favour of the Tangerines for most of the remainder of the half, with stand-in left back Robson outstanding. Just short of the half hour, Robson was fouled by his former team-mate Wilson in the corner. He stepped up to take the free kick himself, and Samuel – appearing to be slightly nudged from behind – was unable to get his head above the ball to direct an effort on target. A minute later, Robson played a long free kick into the area, which allowed McIntyre to win the ball above Varga, but his header was straight at Boruc. Varga had to lunge full strength to deny a through ball from reaching McIntyre in the area shortly afterwards, with Boruc having to react sharply to stop the defender’s intervention heading goalward. Robson again caused problems down the left flank with runs from deep, and another wicked delivery in the 38th minute looked perfectly placed for Samuel’s run to the back post, but Wallace bravely put the ball behind before he and Samuel collided painfully. With those two off the field for treatment, Robson put in the corner. McIntyre’s run seemed to put off Boruc, who had come but got nowhere near the ball, and the ball ended up bouncing off of the seemingly unsighted Fernandez right in front of goal. The danger was half cleared to Robson in the right corner once again, and despite the attentions of two Celtic defenders, he earned a free kick. Once again, he took the set piece himself, and Archibald got to the ball along with his marker. The ball bounced around Samuel, who had literally returned to the field of play seconds earlier, and somehow found its way to David Fernández ten yards out, with the Spaniard calmly placing a low shot into the net for a fully deserved equaliser. Although the visitors fully merited the parity of the scoreline, they were indebted to their goalkeeper for keeping the score that way at half-time, with Stillie parrying brilliantly following Hartson’s header from a Nakamura corner.

In an almost instant replay of the beginning of the previous 45 minutes, Robson again was the first to create danger, when his free kick two minutes after the restart caused confusion again in the home side’s defence, but McCracken was unable to get his shot away in time. Once again, though, United were quickly punished for a momentary lapse in concentration after Brebner had fouled the counter attacking Wallace deep in the United half. Maloney swung in the free kick, and this time it was Maciej Zurawski who was unmarked in the middle, and the Pole gave Stillie no chance with a header into the far corner. The damage could have been worse for United three minutes later, but Duff slid in bravely to deny Zurawski from reaching a cross only a couple of yards from goal. Maloney was next to threaten, but despite being in a good position in the box, he chose to go down in search of a penalty after minimal contact from Duff, with the referee correctly ruling there had been no foul. David Fernandez was played through from a good ball by Mark Kerr just after the hour, but his powerful drive from the edge of the area was parried by Boruc. Cruelly for United, however, the game looked to have been effectively killed off in the 67th minute when Stilian Petrov took aim with an ambitious effort from 30 yards. Although powerful enough, Stillie was beaten by the large deflection off a United player which took the ball into the opposite corner. With it looking like it would take something special to get United back in the game, Craig Brewster brought on Lee Miller for Derek McInnes in a bold move which paid immediate dividends. Samuel ran at Wallace wide on the right, but his cross went beyond Miller in the middle. However, Robson got the loose ball on the left and crossed for McIntyre, who knocked down for Lee Miller to guide the ball into the net. The Celtic supporters were convinced that Miller was yards offside, but the Assistant Referee was absolutely certain that the goal should stand. The home crowd became nervous after that, and United capitalised with an equaliser after a tremendous passing move. Brebner and Miller were involved, then McIntyre played through for the perfectly timed run of David Fernández, who ran clear, rounded Boruc and slotted home to give United their first point at Celtic Park in nine years.