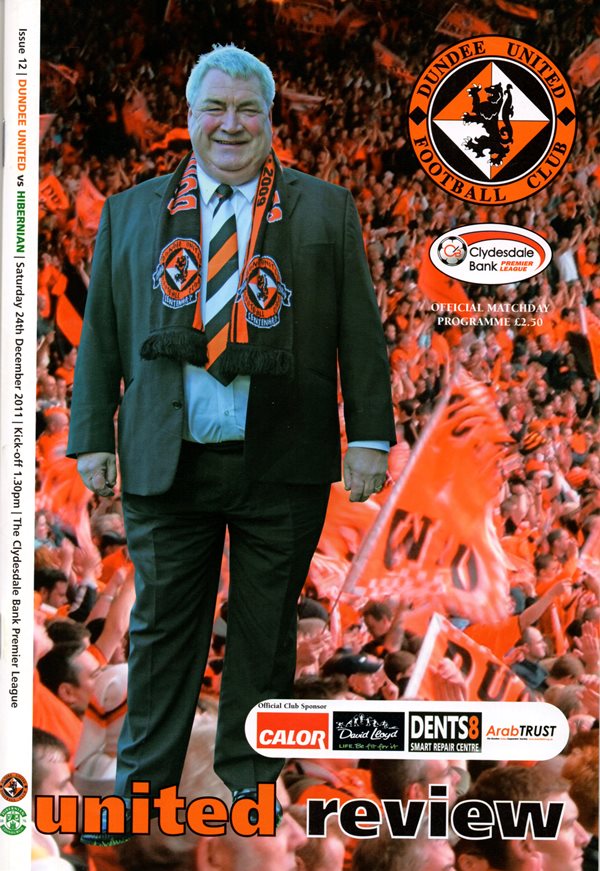 Peter Houston kept with the same starting lineup which had played so well away to Kilmarnock the previous weekend yet somehow only managed to leave Rugby Park with a point.

United started in energetic fashion, with Stuart Armstrong hitting a shot over the bar in the opening minutes from around twenty yards following good work by Johnny Russell. Hibs countered shortly after when Ivan Sproule drove at Robbie Neilson on the left before shooting into the side-netting, although Dusan Pernis looked to have it covered. After an edgy first 15 minutes United created another half-chance following patient build up play involving John Rankin and Armstrong. Dixon sent in a cross from the left that just evaded the outstretched leg of Jon Daly. Both teams appeared to be cancelling each other out, with little space in a congested midfield area. Hibs threatened in the 19th minute when Martin Scott found room in the United box and drove a low ball into the six yard area from the left, with Griffiths just short of connecting with the ball. Hibs took the lead in the 23rd minute through Leigh Griffiths. Stuart Armstrong lost possession to Martin Scott in the middle of the park and Scott lifted the ball over a flat United back four to put Griffiths one-on-one with the United keeper, before the Hibs striker confidently finished from nine yards out. United created their best chance after half an hour following an intricate passing move between Rankin, Daly and Russell, with Russell ultimately finding room in the Hibs penalty area before firing a low drive just wide of ‘keeper Graham Stack’s right hand post. Hibs almost extended their lead in the 42nd minute after Victor Pallson sent in a wicked cross from the right. The industrious Griffiths connected with a fine header that looked net-bound until Pernis made a magnificent save to his right. Half time: 1-0 to the Hibees. A largely scrappy first half, full of endeavour and industry but sadly lacking in guile and invention. Hibs took confidence from Griffiths’s goal, and looked the more livelier, and perhaps likelier to score, from then on in.

The second half started in similar fashion, with United dominating possession but creating little in the way of chances. Scott Robertson almost put United level in the 52nd minute after playing a neat one-two with Daly in the Hibs’ box and firing a shot that the encroaching Stack did well to block. Sean Dillon and Leigh Griffiths were booked in the 55th minute following a touchline altercation. United equalised in 59 minutes through Johnny Russell. Gary Mackay-Steven dribbled brilliantly on the edge of the Hibs penalty area, evading several challenges before feeding Armstrong who played in Russell. The United striker coolly went round the keeper before rolling the ball into the empty Hibs net. The goal sparked United into life, with the home side now well in control of the match and looking to take the lead. Russell looked to get a second goal in the 67th minute, doing well to control a high pass just inside the box before firing a shot well over the bar. Just two minutes later Russell tried his luck again following a terrific run and cross by John Rankin. Daly laid the resulting cross off to the United striker who curled a shot past Stack’s left hand post. United were now applying some serious pressure, and after a long spell of domination took the lead in the 76th minute. Paul Dixon’s telling cross from the left flank was met by Jon Daly whose powerful header beat the Hibs keeper to give United a deserved lead. Hibs tried to get back on level terms three minutes later, with O’Hanlon heading wide from a Griffiths corner. Johnny Russell then fired a powerful drive over the bar after a Jon Daly knockdown. Hibs had another effort in the 80 minute, with a cross from the right not dealt with properly by the United defence, before Hibernian substitute Danny Galbraith’s shot was initially saved by Pernis and then cleared by Gavin Gunning. Jon Daly then killed the game with two minutes of normal time remaining, calmly finishing after Mackay-Steven had put the big United striker clean through on goal. The home side were now threatening to run riot, and John Rankin found space on the edge of the box shortly after, before shooting well over. Substitute Scott Allan made a cameo appearance in injury time with a terrific shot from 25 yards that forced Stack to push over the bar for a corner. Full time: 3-1 to United. The old cliché of a game of two halves very apt in describing this match.

To say the least our last home game with Celtic was one to forget. We simply didn't turn up and I think technically, it is the worst I have ever seen us. Normally, we are a good passing side, but on this occasion we were unable to pass it from A to B! The trips to Inverness and Kilmarnock saw us bounce back and showed that we never know when we are beaten, the players keeping going right to the final whistle. Although we lost a first minute goal to Caley Thistle, we atoned for the poor passing of the previous week with plenty of possession. Though I must concede, it was without ever looking like scoring in the first half. But the introduction of Johnny Russell after going two down gave us the kick-start we so badly needed. Fortunately, he quickly pulled a goal back and after that the players were magnificent. That built up a wee bit of confidence again as we turned in our best performance of the season at Kilmarnock. No one could have complained had we been four up after quarter of an hour or six ahead with half an hour gone. Yet we had to rely on a fantastic last minute Paul Dixon goal to salvage a point. It would have been a travesty had we lost the match and it almost felt like a defeat.

Our recent run has brought plenty of positives with our only defeats in the last eight games coming at the hands of Rangers and Celtic. Sandwiched between meeting the Old Firm, we've had difficult games with Hearts and Motherwell and then away to Inverness and Kilmarnock, neither of which are easy places to go, but emerged unbeaten. But since the back to back defeats to Aberdeen and Motherwell, from the game against St Johnstone, the attitude and effort of the players has been top class, although we are always striving for better in our push for a top six place. So we are looking forward to the busy Christmas schedule starting with todays game against Hibs. Though he hasn't enjoyed the best of starts, the arrival of a new manager in the shape of Pat Fenlon will give them a lift. I have met him a few times and he has been desperate for an opportunity to manage in Scotland, and indeed, could have been the manager here at Tannadice. But I am looking forward to pitting my wits against him and hopefully come out on top in this, because there is no doubt that the best way for everyone connected with the club would be going home to celebrate Christmas with three points. Before signing off can I wish every-one a very Merry Christmas and a Happy New Year.