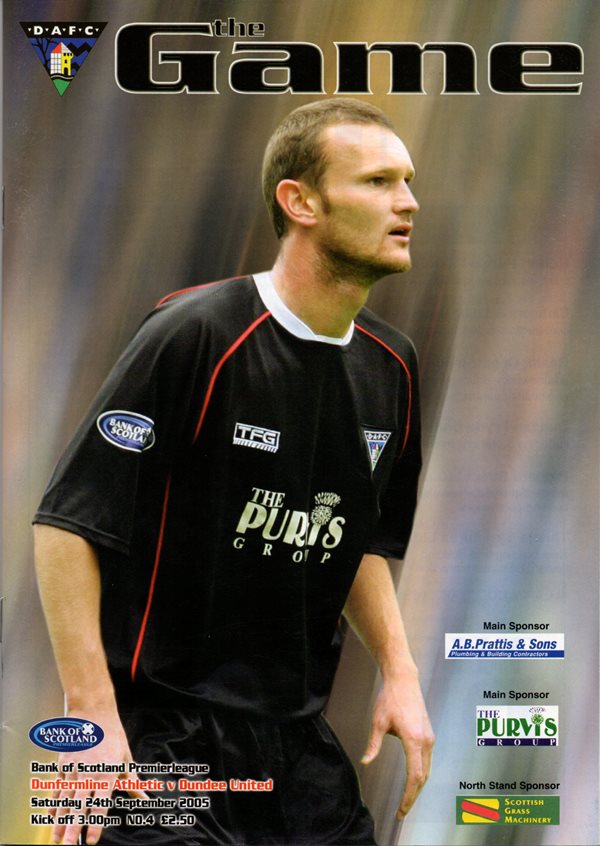 After the midweek disappointment in the League Cup, Gordon Chisholm bolstered the United midfield for the match, with Mark Kerr and Derek McInnes coming in for Stuart Duff and Peter Canero. United, with goalkeeper Derek Stillie returning to face his former side, started in 3-5-2 formation, with the two changes direct replacements.

Dunfermline, meanwhile, were searching not only for their first home point, but also their first home goal. After their midweek win at Kilmarnock, Jim Leishman made only enforced changes, with Andy Tod replacing the injured Scott Thomson, and Greg Ross coming in at the last minute for Darren Young, who was injured in the pre-match warm up. The Pars started in 4-4-2 formation, ex-United player Jamie McCunnie playing on the left of midfield.

Derek Young should have opened the scoring in the fourth minute, when he latched onto a flick on by Tarachulski, but blasted harmlessly over the bar from nine yards. Minutes later, United had an effort ruled out, when Lee Miller impeded McGregor’s path to Brebner’s deflected cross, causing the goalkeeper to fumble into the path of Fernandez who tapped in.

The play for much of the first half was confined to a midfield battle occasionally complemented by an off target effort by long range, with both sides guilty of the inaccuracy. Stuart Dougal reached for the notebook in the 22nd minute, booking Archibald for a trip on Tarachulski.

Things were to improve for United after the half hour, as they began to dominate. Central to the action was David Fernandez once again. With 35 minutes on the clock, he somehow evaded Labonte, Wilson and Tod before firing a shot wide across goal.

Fernandez turned creator on 39 minutes, his pass finding Robson on the left edge of the penalty area. The winger cut inside, and fired goalward, but McGregor parried. Two minutes later, Fernandez was fouled by Zambernardi on the right flank.

This time, Fernandez’s involvement would indirectly bring the breakthrough. The resultant inswinging free kick from Robson found David McCracken, who had outjumped Scott Wilson and headed powerfully goalward. McGregor got his hands to the ball, but couldn’t stop the defender notching his first goal of the season.

United almost added an identical second goal four minutes into the second half, with Miller this time meeting an inswinging Robson free kick, but McGregor pulled off a superb save to tip over the bar.

Mark Wilson did well to block Horsted’s shot on 50 minutes from the edge of the area. It was to be the beginning of a period of concerted play centering around the English winger. He was again involved on 56 minutes, dispossessing Wilson, but shooting wide.

Horsted again beat Wilson two minutes later, but Stillie comfortably saved his shot. Again Wilson was left in Horsted’s wake a minute later, when his delivery into the box was cleared for a corner. Like Fernandez, Horsted’s involvement would eventually pay off, with Makel’s corner met by Scott Wilson at the back post, who headed home.

United again contributed to their own downfall in the 76th minute. Hunt received the ball on Dunfermline’s right, and Archibald and Ritchie both went to cover. With the former out of position, the latter inexplicably decided to cover behind the striker for a lay off, allowing Hunt to run into the area and take his time in supplying Greg Ross with an opportunity to fire the home side into the lead.

A slip by David McCracken almost allowed Dunfermline a chance to extend their lead, but Tarachulski’s cross for Hunt was off target.

United finally showed some commitment in the final ten minutes, by which time Dunfermline were happy to soak up the pressure and take the three points.