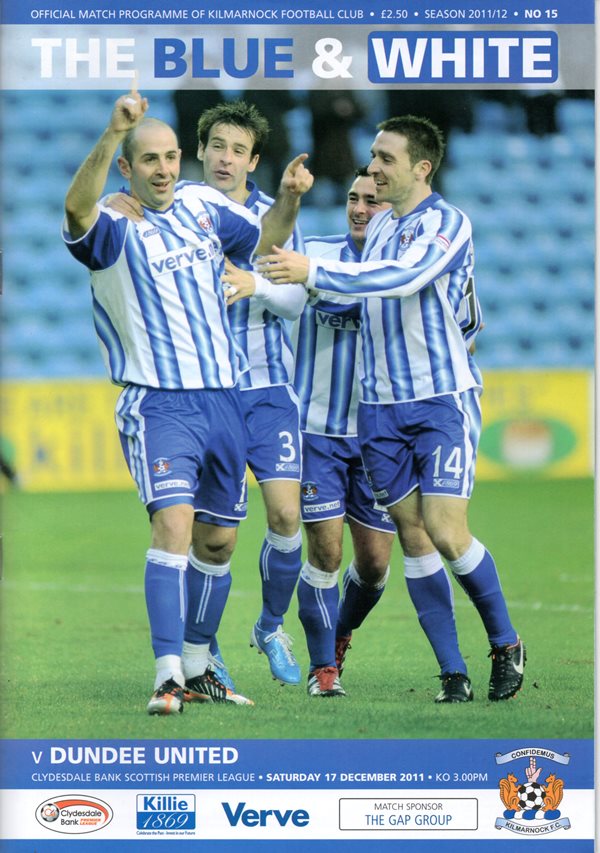 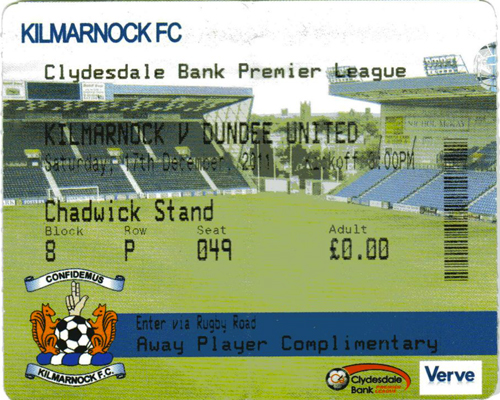 Manager Peter Houston’s only change was to bring last weekend’s match winning substitute Johnny Russell back into the starting line-up in place of midfielder Willo Flood, as the team started with the same 4-4-2 formation that they finished with in the 3-2 win at Inverness.

It was something of a whirlwind start to the match and either side could have scored three or four goals in the opening 20 minutes. United were the first to lay siege on the Kilmarnock goal, and from the first of a procession of four corners John Rankin hit a long range effort just past the post. Then Cameron Bell pulled out a fine one-handed stop to tip a Gavin Gunning header onto the bar after the Irish defender did well to meet a Gary Mackay-Steven corner. It wasn’t long before United threatened again, with Johnny Russell, playing up front alongside strike partner Jon Daly, teeing up the Irish striker, who looked to have tucked the ball below Bell, only for the Scotland international keeper to get down well to save. Kilmarnock had struggled to keep themselves in the game but they then had a series of chances, with Scott Robertson doing well to block James Dayton just as the Englishman was about to pull the trigger, then Dean Shiels cracked in a long-range effort that smacked off the bar. Beanpole centre half Zdenek Kroca then found himself free in the box but misdirected his shot. In an end-to-end start that was more like a basketball match than a mid-winter SPL tussle, young midfielder Stuart Armstrong then fired in a low long range effort that spun under Bell but cracked off the inside of the post. Shortly before the half hour, United came close again after some dazzling dribbling from Mackay-Steven who teed up Jon Daly but United’s top scorer, normally so lethal from close-range, side-footed inches past Bell’s right post. Kilmarnock kept creating chances as well and two long range efforts from Rory McKeown and Heffernan were comfortably saved by Pernis. With 10 minutes to go until half-time, Cameron Bell did well to get down to Stuart Armstrong’s feet to deny him just as he was about to shoot – which incredibly resulted in United’s ninth corner of the match. As the game neared half time, Jon Daly missed a gilt-edged opportunity when he slid an effort wide from point-blank range after Paul Dixon pinged in a fantastic cross from the left. With 10 corners, seven good attempts on goal and some great creative play, it was incredible that United went in at half-time with the score tied at 0-0. The game had been a real advert for SPL football and Kilmarnock’s own open style of play had helped result in an engrossing and highly entertaining 45 minutes.

The second half had started much scrappier than the first, with a number of misplaced passes by both sides. It looked like both times were going to be cagier than they were in the first half but then a moment of top quality from James Dayton saw Kilmarnock take the lead, as he fired in a superb 25-yard left-footed shot that left Dusan Pernis with no chance. United tried to find their way back into the match immediately and Johnny Russell side-footed an effort low beyond Bell but also just past the post. Russell again came close soon after when he met a Paul Dixon cross but diverted it beyond the post. United kept pressing and a Dixon free kick from the right was headed narrowly past the post by Gunning. United were finding it difficult to break down the Killie defence and Houston threw on Finnish striker Lauri Dalla Valle for John Rankin with a quarter of an hour to go in a bid to get an equaliser. A Mackay-Steven corner then deceived a number of players in the box before reaching Sean Dillon at the back post but he nodded the ball right into the arms of Bell. Stuart Armstrong then did well to take down the ball down and strike a half-volley from 20 yards that Bell had to be alert to in order to save, as United switched to a 4-3-3 to chase a point. Cammy Bell was again the hero for the home side as he got down well to save at the feet of Jon Daly as the big striker tried to round him in the final minutes. As the game entered injury time United got the equaliser that their play merited as Paul Dixon powered his way into the box then fired in a fantastic effort that finally beat Cammy Bell and sent the 300 United fans behind Dusan Pernis’s goal wild. A draw was the least that United deserved in a match where they played good open and attacking football and created a hatful of opportunities. In the end, it was Dixon that stole the headlines but Peter Houston will go home happy with many of the performances across all departments of the side.