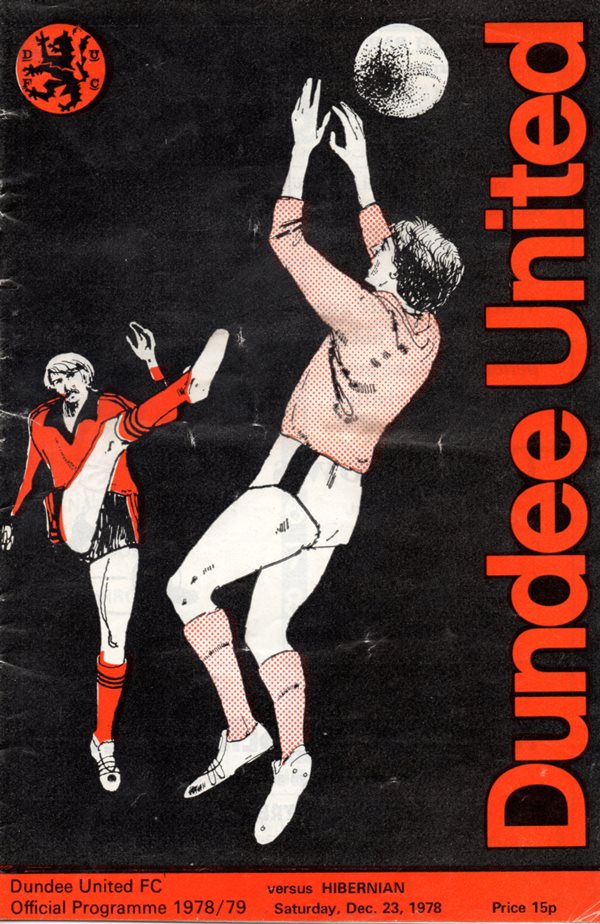 United's attack was strengthened by the return of striker Paul Sturrock, and Derek Frye started his first game since mid-September. Davie Dodds dropped to the subs bench and Iain Phillip was absent with flu.

Hibs were first to threaten, when an Ally MacLeod through-ball found Tony Higgins, whose low shot was blasted into the side netting. A Graeme Payne cross was headed just wide by Sturrock, but United took the lead moments later. Hibs defender Jackie McNamara, under pressure from Frye in the six yard box, back-headed a harmless looking John Holt cross past the static Mike McDonald. Higgins again came close, this time with a header from a MacLeod free-kick. In the 25th minute, Sturrock spurted forward and found Holt with a reverse pass, and the midfielder ran into the box before seeing his chip saved well from the keeper. Ralph Callachan had a fresh air shot in front of goal after an Isak Refvik corner at the other end, and then Billy Kirkwood opened up the Hibs defence with a direct run and his 20 yard drive was touched round the post by McDonald. Hamish McAlpine partially saved a Refvik effort, and as the ball rolled slowly towards the goal Paul Hegarty cleared.

The second half started with McDonald again saving Hibs, as he pulled off a magnificent save from a Hegarty header. Hibs Des Bremner then drove the ball against United's upright from an impossible angle, before United scored their second of the match. A long Holt throw-in found Sturrock on the left and his cross found Graeme Payne unmarked 18 yards out, and the midfielder met the ball perfectly leaving McDonald no chance. Hibs were unlucky yet again when MacLeod's powerful drive was parried onto the post by McAlpine in the 58th minute, and soon after frustration bubbled over when three Hibs players began pushing each other as tempers got the better of them - something missed by the referee. A one-two between George Fleming and Kirkwood left Fleming with only the keeper to beat, but his shot was blocked by the keeper. United continued to push at Hibs, with a penalty shout being turned down after Hegarty was pushed in the box, and a Davie Dodds headed goal was chopped off for an infringement. Hibs defender Stewart managed to hit his own post after his keeper had misjudged a Holt cross. The Edinburgh side managed to pull a goal back with 15 minutes to go, when Des Bremner ran from the blind side to bullet home an Arthur Duncan free-kick. Having been in control for so long, United were now reeling, with McAlpine having to save a efforts from Bremner and Higgins. With five minutes to go, Sturrock broke free only to be stopped by George Stewart, but amazingly referee Syme gave no foul and the decision was greeted with astonishment and derision.Thankfully United never suffered for that judgement and the two points won gave United a two point gap at the top, with United's nearest challengers all dropping points.The season was now exactly at the half way point with everybody having played 18 matches.

As we await Hibs this afternoon for the opening game of the much-publicised "crisis" holiday period there is one aspect of our recent run which has somewhat dimmed the successes. Simply that of the reporting of these games and the publicity given by those journalists 'in the West of Scotland to our Premier League leadership. Like most managers, publicity for the club is an integral part of the provincial boss's package in assisting to instil interest in the club throughout the country. However, constructive criticism I will always accept, but criticism just for the sake of it I honestly cannot abide. And that's the basis for my complaint after our visit to Parkhead last Saturday. We have long had to suffer such slights after games in the West over the years but nowadays I am beginning to 'liken such excursions there to our many sportsmen and women who travel to Italy — where decisions seldom do them justice!

For even after taking maximum points from Rangers' visit here two weeks ago and coming home from the Celtic game with a point when playing badly, the old, old story of our West of Scotland hoodoo was still being bandied about in newspapers. I only wish that such people as write these articles would do a bit more homework on our record there, for with only one defeat from six outings there this season, I for one fail to see that as being a bad record. I would guarantee that such as Aberdeen or Hibs would be absolutely delighted with such a return from such ventures into the West. However, in one respect even these reports were spot-on in their assessment of what was for us an abysmal first 45 minutes at Parkhead. Gone was the attitude which floored Rangers and in its place was a formation which creaked to an interval one goal deficit. And that's why I rated last Saturday's result as a point dropped by us, not gained, because Celtic were definitely there for the beating. Yes, it was a bad result for us. No side in this League can afford to play for only 45 minutes and the quicker we realise that the better it will be. But let's forget about Rangers and Celtic today and get right onto the only thing that matters — the next game — and Hibs, despite their recent disappointments, will be no easy opponents. Only our best will do, and that's the aim.