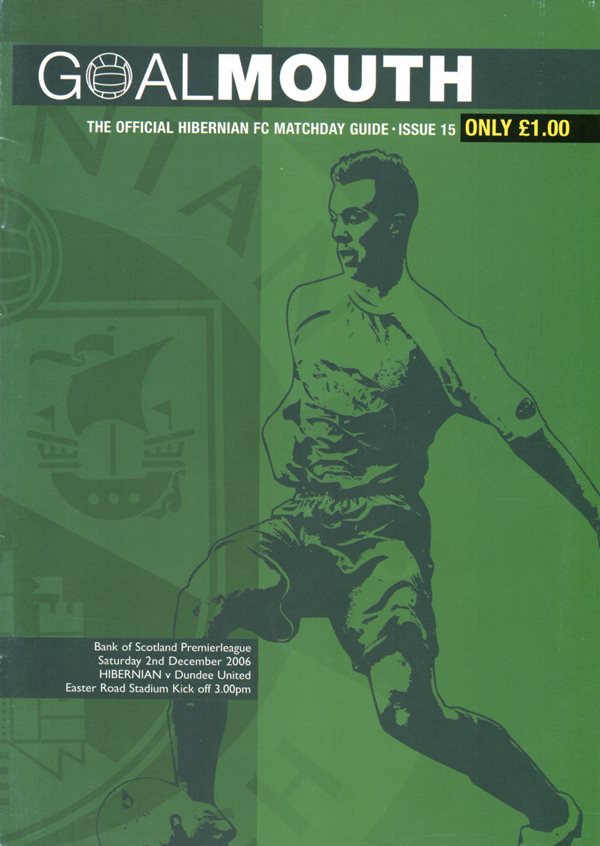 A second half goal from Steven Fletcher gave Hibs the points at Easter Road, Hibs having to come from behind to defeat United. A Shelton Martis own goal had given United the lead after 24 minutes from a Craig Conway cross, but a controversial equaliser in first half injury time from Rob Jones restored parity before Fletcher’s second half drive secured the win.

John Collins made one change to the Hibs side which drew 2-2 against Celtic at Easter Road last weekend. Chris Killen had recovered from the injury which kept him out against the league leaders, and he replaced Benji in the starting line-up.

For the visitors, Noel Hunt missed out through a slight leg knock, and his place was taken by David Goodwillie in one of three changes to the United side. Elsewhere, Garry Kenneth could only take a place among the substitutes, while Greg Cameron also dropped to the bench. Alan Archibald and Collin Samuel were the other men to come in.

United were looking sharp all over the park, and were quick to close down their opponents all over the pitch. Inside the opening ten minutes, Samuel capitalised on slackness from Jones and picked the ball up, but his cross towards Goodwillie was blocked by a defender. Minutes later Craig Conway beat Whittaker for pace on the left flank, and Martis had to lunge to clear his low cross before it got to the young United striker.

At the other end, Lee Mair turned into trouble in the shape of an onrushing Steven Fletcher, who dispossessed him, and he passed to Beuzelin who saw his shot blocked for a corner. Whilst he was having a tough time trying to restrain Conway defensively, Whittaker was always keen to get forward and support in an attacking sense, and he passed for Sproule in the 22nd minute, with the winger’s powerful low cross perfectly placed for the run of Fletcher at the back post. Fortunately for United, there was too much pace on the cross and the Hibs forward couldn’t control his finish, with the ball going over the bar.

United made their hosts pay for the miss only two minutes later. Conway picked up on the left, and used Kalvenes’s overlapping run as a decoy to come inside and cross right-footed. Malkowski was tempted off his line, but Martis leapt in front of him to get a touch to the ball, leaving his goalkeeper stranded as the ball nestled into the far corner.

David Goodwillie almost doubled United’s lead within a minute of the re-start. Samuel played in the striker on the right channel, but his powerful effort was parried by Malkowski.

Hibs were clearly frustrated, and they were struggling to put together attacking moves with their normal cohesion. Beuzelin and Fletcher both fired over the bar before the half hour, and Sproule was twice denied by the offside flag, before United moved forward again.

Conway again cut inside in the 31st minute, jinking beyond Martis, and just as it opened up for him to shoot from 18 yards, Jones lunged in to block his shot. Barry Robson also went on a mazy run shortly afterwards, and passed for Goodwillie inside the area, who fired a left foot shot over the bar.

Just as it seemed United would take the advantage into the half time break, Hibs equalised. A free kick was given to the home side wide on the right. The set piece was taken quickly through a blast against the retreating Mark Kerr, and rebounded out for what looked like a throw in. However, referee Steve Conroy instead gave them a second chance to take the free kick, which was to prove costly for United. As the cross came in from the re-taken kick, Killen stole himself a yard of space with a shove on Mair, and it was the New Zealander who got the merest of flick-ons for Jones who despatched the ball into the net beyond Stillie.

Hibs started the second half much sharper, and having scored on the stroke of half time, their fans were providing them with some audible coval backing for the first time.

However, it was United with the first effort of the second period, when Goodwillie squared for Kerr in the 53rd minute, but the midfielder’s shot from 20 yards was drilled wide of goal.

Hibs were pushing forward more, and John Collins used his substitutes to freshen things up going forward, but Conway and Goodwillie were still causing the Hibs defence problems, and Goodwillie showed some outstanding individual skill to beat three defenders on the right, but his low cross was easily gathered by Malkowski.

Despite looking more attacking in the second half, Hibs had failed to carve out any clear cut opportunities, but that changed in the 73rd minute when they took the lead. Substitute Benji collected a ball into the box, and as the Hibs fans shouted for a penalty after Mair’s challenge on the Moroccan, Steven Fletcher drove the loose ball into the far corner of the net.

Shortly afterwards, United were denied a penalty after Conway went down in the area, while in the closing stages Derek Stillie made a good save from Dean Shiels’s angled shot.