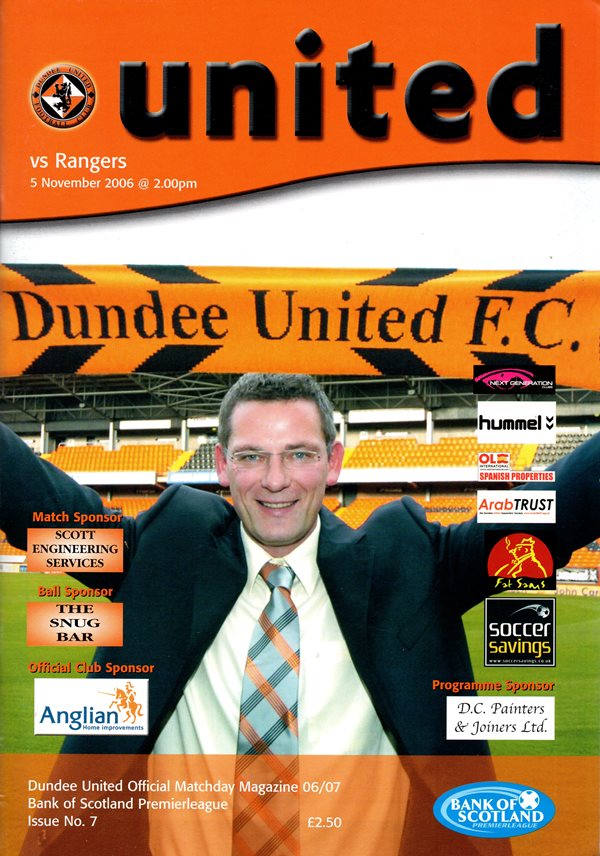 Craig Levein got off to the perfect start at Tannadice as United came from a goal down to defeat Rangers. After a goalless first half where United were far from overrun, Rangers broke the deadlock five minutes into the second half when Novo’s cross was side-footed home by Charlie Adam. United came back into it though, and Garry Kenneth headed a Robson corner home for the equaliser thirteen minutes from time, before Lee Mair headed the winner five minutes later from a Conway free kick.

Levein rang the changes for his first game in charge, with United showing seven changes to the side which lost at Falkirk last weekend, the only survivors in the starting line-up being Lee Mair, David McCracken, Greg Cameron and captain Barry Robson.

Paul Le Guen made two changes to the Rangers side which beat Maccabi Haifa in the Uefa Cup on Thursday evening. Sasa Papac and Thomas Buffel came into the side, with Karl Svensson and Kris Boyd the men to drop to the bench for the Ibrox side.

Although United had looked composed on the ball in the early stages, perhaps predictably it was the visiting side who enjoyed the most possession and the early chances. In the fourth minute, United were caught flat footed at the back as Rangers took a quick free kick. Nacho Novo ran in behind Kalvenes, but his lob over the on-rushing Stillie also cleared the bar.

Barry Ferguson tried a couple of efforts from range, but failed to guide either of them on target. Rangers had to wait until the 34th minute before carving out another clear cut opportunity, and again Novo was the wasteful man. Hutton did well to keep the ball in play at the corner flag, and his hooked cross came off Kalvenes and fell nicely for the Spaniard, who fired wide from 14 yards on the angle.

United hadn’t had the chance to show their potential in the final third of the opening half hour, with Conway and Robson both having their hands full tracking back the Rangers full backs, but they almost found themselves in front five minutes before the break. A Christian Kalvenes throw-in in the Rangers half found its way to Collin Samuel on the left flank, and his low cross was met by a sliding clearance from Sasa Papac, who slid the ball inches wide of his own goal.

The resulting corner was cleared to the edge of the area where David Robertson lined up a 25-yard drive which deflected off the foot of Ferguson and forced McGregor into a terrific diving save.

United opened the second half on the front foot, and a well timed Hutton challenge stopped Robson getting a shot on goal in 47 minutes.

Having seen some more possession in the Rangers half though, United found themselves behind five minutes into the second half. Nacho Novo’s low cross from the left was perfectly placed for Charlie Adam to run onto and side-foot home from six yards.

Following a McGregor save from Goodwillie’s shot from a tight angle five minutes later, Adam was again played through, but Stillie got a hand to the youngster’s chip which allowed McCracken to make the clearance.

Craig Conway wasted a good opportunity in the 66th minute, after Robson’s run down the left resulted in a pull back to the edge of the area, but Conway’s left foot effort went over the bar. Novo then shot wide following Prso’s cross.

United got back level in 77 minutes, when Robson’s deep corner from the right found Garry Kenneth who headed into the net. Delight came five minutes later when Craig Conway curled a free kick into the area from the left, and Lee Mair rose to head home behind Allan McGregor to send the United fans into raptures. 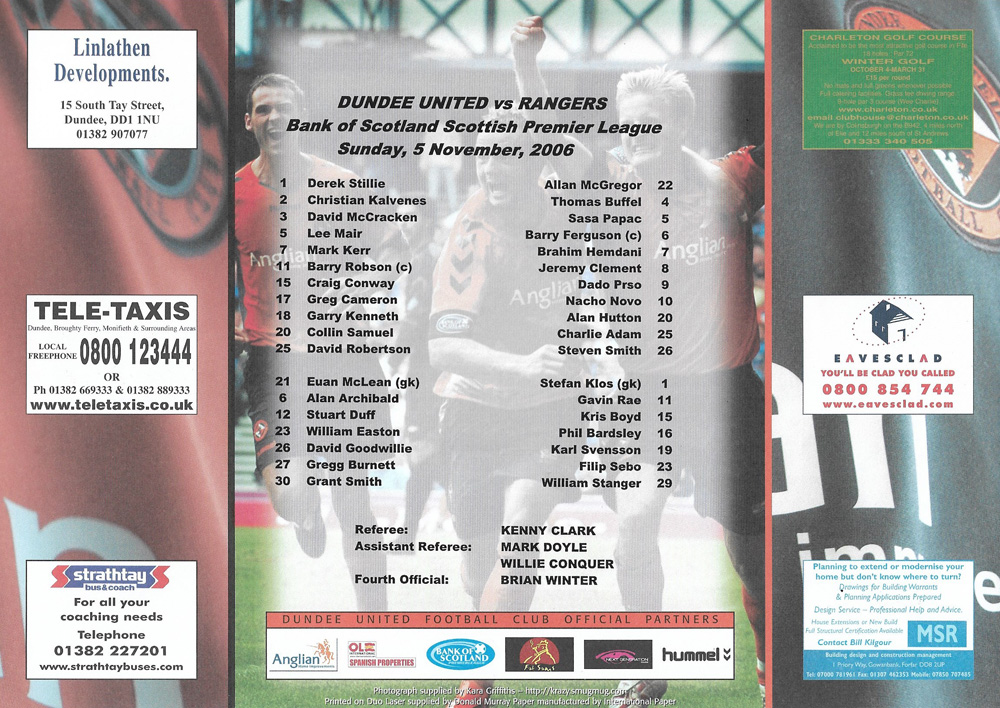