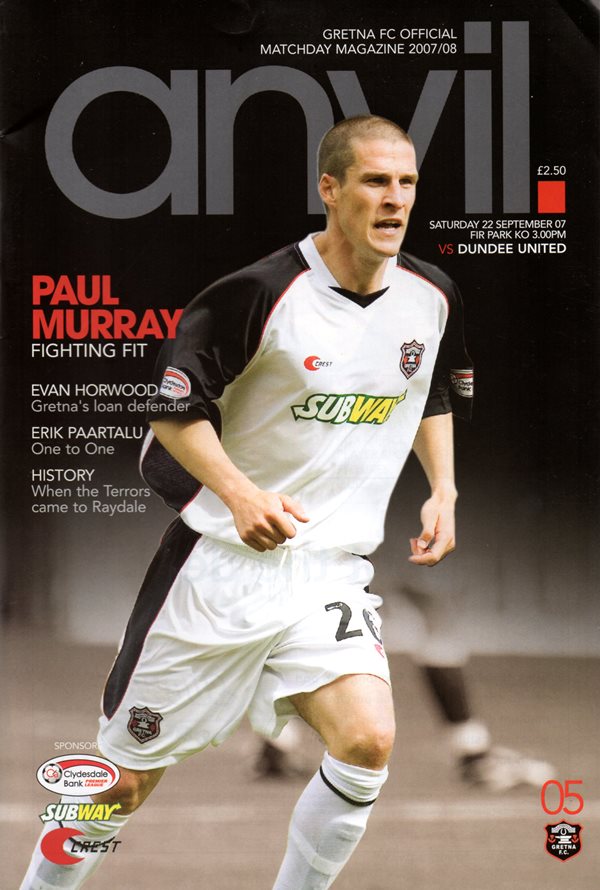 United’s run of four straight victories came to a halt this afternoon with a below-par display against battling Gretna. The visitors went into the game boasting the best defensive record in the league, but their usually solid back four never really got to grips with the hosts’ ambitious three man attack. For the home side, Cowan, Paartalu and Deverdics replaced Barr, Osman and McGill. United welcomed back Gomis from suspension in place of David Robertson and Stuart Duff deputised for the injured Kalvenes.

A bright opening period saw McMenamin miss the first real chance of the game, heading a dangerous Yantorno free-kick over from six yards. United opened the scoring on nine minutes. Flood’s cross from the left was headed down into the six yard box by Noel Hunt, and Prince Buaben tapped home for his first goal for the Tangerines. Rather than settling United down, the opener seemed to stir the home side into attack. A powerful drive from more than forty yards by Chris Innes forced Szamotulski to parry the ball for a corner. Yantorno got two chances to deliver a dangerous ball into the box and, with United making a hash of clearing the ball, David Cowan drove home the equaliser from six yards.

Gretna’s quick counter-attacking style was looking effective. But Deverdics was lucky not to be punished for gifting possession to Jordan Robertson at the edge of his own box with the striker snatching a shot wide of the post. Yantorno tested Szamotulski with a powerful free kick, and then Skelton volleyed just over from twelve yards as Gretna sought to take control. At the other end Noel Hunt should have done better than find the side netting, after a good driving run from Willo Flood.

Gretna took the lead on 36 minutes after United again failed to deal with a cross from the right. Colin McMenamin found himself completely unmarked in the six yard box, and his header across goal was nodded home by Cowan. United almost grabbed an equaliser on the stroke of half time, but a last gasp challenge from Horwood stopped Hunt at the back post after a clever cut-back from Robertson. United were behind at the interval, but with neither defence looking comfortable, it was clear there would be more goals.

United pushed forward after the break, with Gretna content to hit on the counter. United’s best chances came from set pieces, Fleming producing two fine saves low to his right to block Robson free kicks, and Darren Dods inches off target with a header from Flood’s set piece. United survived a major scare on 63 minutes when another dangerous Yantorno cross was headed off the underside of the bar by Aurelien Collin, Szamotulski saving McMenamin’s follow up shot. Two minutes later and United made the most of that escape by drawing level. Lee Wilkie rose above a crowd of players to head home Robson’s out-swinging corner – another first goal in tangerine.

Both teams went looking for the three points, with United pushing Noel Hunt up alongside Robertson, and Steven Robb coming on in place of Gomis. But the winner was to go Gretna’s way with just four minutes left on the clock. United’s free kick broke down and on the counter Evan Horwood broke free on the left. A deep cross found substitute Jenkins at the back post, and he powered a downward header past Szamotulski to seal Gretna’s first win in the SPL.

United almost spoiled the party with Fleming completing a hat-trick of fine saves from Robson free-kicks, then goal-hero Cowan cleared a Garry Kenneth header off the line. An exciting game for the neutral, but United will perhaps feel that this was a game they could and should have won had they performed to the same level as recent weeks.