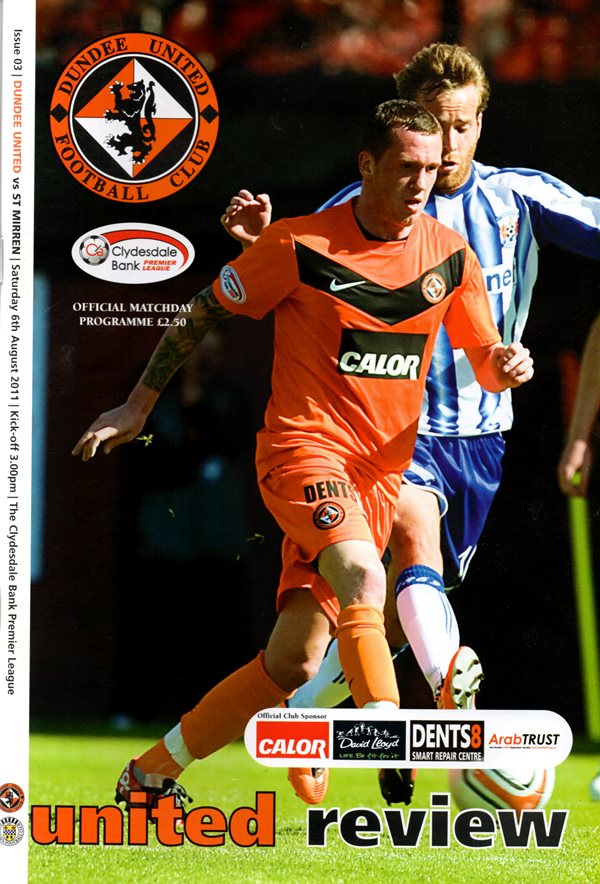 Dundee United were now officially beginning life after David Goodwillie following the Scotland international’s £2.8 million move to Blackburn Rovers. Peter Houston’s side weren't daunted by the challenge however having secured a win at Tynecastle the previous weekend without the services of Goodwillie and they looked to continue their unbeaten start to the 2011/12 SPL season with a result against St Mirren at Tannadice. Houston named an unchanged line-up for the visit of the Buddies following his side’s impressive performance against Hearts with promising young midfielder Scott Allan retaining his place in midfield.

The match got off to a horrible start with Scott Severin being stretchered off only minutes into the game following a 50/50 with Jim Goodwin, Scott Robertson came on in his place. Unknown to anyone at the time, Severin had suffered a triple leg break which would tragically end his football career. Jim Goodwin was involved again soon after when he cynically brought down Scott Allan just outside the box following a brilliant run from the young midfielder. Paul Dixon’s effort from the resultant free-kick didn't have the accuracy to trouble Samson in the St Mirren goal as the ball brushed the roof of the net on the way over the bar. Scott Allan was giving a very good account of himself on his home debut: showing determination to dispossess Jim Goodwin following a St Mirren thrown-in before driving forward through the middle of the park and unleashing a powerful drive that was just too high to threaten the Craig Samson. With eleven minutes gone at Tannadice, United were made to pay for sloppy defending as St Mirren went ahead through ex-United striker Steven Thompson. Nigel Hasselbaink’s pace was enough to get the better of both Willo Flood and Keith Watson out wide on the right and the tricky attacker managed to hit the by-line before cutting the ball back for Thompson to stab home from 6 yards out. United almost drew level through Willo Flood who gained possession on the edge of the St Mirren box after Jon Daly was tackled in the box but the midfielder dragged his shot wide of the right-hand post from 18 yards. Minutes later and United were presented with an even better chance to equalise: a powerfully driven free-kick from Garry Kenneth was too hot to handle for Samson and the ball rebounded nicely to Keith Watson who was unmarked right in front of goal 10 yards out but the big defender completely miscued and the chance was gone. St Mirren were playing some entertaining football and were threatening to extend their lead: Paul McGowan had a dipping long-range effort tipped over the bar by Dušan Perniš before the break. Then – with half-time looming - there was a moment of real controversy. The pace of Nigel Hasselbaink again caught United’s defence flat-footed, this time Paul Dixon was at fault as the attacker sprinted past him and as Dixon desperately tried to catch up with him it appeared that the St Mirren player accidentally caught him in the face with a flying arm. The referee adjudged this to be deliberate and sent Hasselbaink off, much to the fury of the St Mirren players, fans and management team.

With the extra man, United unsurprisingly started the better side in the second half as they set out to get back into the game: Johnny Russell tested Craig Samson with a diving header early on. Russell went close again minutes later but his powerful left footed strike flew just wide of Samson’s right-hand upright. Jon Daly was next to try and test the St Mirren goalkeeper but his header from a Willo Flood free-kick drifted wide of the target. On the hour mark Daly went close again, this time heading Keith Watson’s ball into the box inches wide of the post. It was really a matter of when, not if, United would score the equaliser and the answer was in the 67th minute. Scott Allan’s determination to run at the St Mirren defence finally paid off: getting in behind before the cutting the ball back from the by-line for Jon Daly to turn the ball home at the near post. It was almost a carbon copy of Steven Thompson’s opener for St Mirren in the first half. United were now on the hunt for a second goal and substitute Gary Mackay-Steven showed some of his potential when he easily skipped by Darren McGregor on the left before whipping in a brilliant cross: unfortunately there were no takers in a tangerine shirt. Scott Allan was presented with a brilliant chance to put United into the lead when Jon Daly knocked down a Willo Flood cross into his path around 12 yards from goal but the midfielder’s wild effort went high and wide of the target. The St Mirren were now desperately hanging on with United exploiting spaces out wide to deliver balls into the box: a low, fizzed, Paul Dixon cross was very almost turned in at the back post but Keith Watson arrived just a little too late to make contact. As well as being a good dribbler, Scott Allan had shown the Tannadice faithful that he wasn’t afraid to have a pop from range and he did so again with a right-footed drive from outside the box and Samson did well to get down at his left-hand post to block the shot. Despite incessant pressure from United they could not find the winning goal and the match finished all-square: a brilliant result for St Mirren who had played a whole half with only ten men but a disappointing one for United who had well and truly dominated the second half with only one point to show for it. United and St Mirren were now sitting joint top of the SPL after three matches played.

David Goodwillie may have gone, and I wish him all the best, but on the evidence of the season so far we have plenty to look forward to after what I consider a very satisfactory start to the season. You always look to win your home games and after going behind to Kilmarnock, it was a test of character especially after the disappointment of going out of Europe three days earlier. So the lads showed a lot of character to come back against what I thought was a good Kilmarnock side to earn a draw. A lot of people may have written Kilmarnock off, but I certainly haven't and feel they are going o be a difficult team to play against and beat as they showed here. Then, of course last week we beat Hearts at Tynecastle and out with the Old Firm, I don't think many teams will win there, so that was a tremendous effort. Even more so due to the fact that we created as many chances as we did; bring out world cup saves from their goalie; be denied a penalty and hit the crossbar, and indeed had chances in the second half to kill it off. All round, it was a great performance from the players and I don't think we had any failures. We had defenders doing their job well, heading the ball clear when crosses come in. In the middle of the park, we had players who bossed the game and the front two of Johnny Russell and Jon Daly put in hard shifts. All I can say is that if I get that every week, I'll be delighted. And so far this season, the attitude has been spot on, albeit during the first half against Kilmarnock we weren't at our best.

Against Slask Wroclaw over the 90 minutes of the home leg we were brilliant, scoring three goals. So overall, I am happy even although we have a small squad Remember we defeated Hearts at Tynecastle without Scott Robertson or Danny Swanson in the team, only for young Scottie Allan to come into the side and do a fantastic job. His performance has given me hope. Though neither I nor the fans can expect him to produce performances of that level every week, but like Stuart Armstrong, they'll improve the more they play and have the potential to become important members of the side. This afternoon we welcome a St Mirren side that have started equally as well as us in the league. I saw them play at Dunfermline and the stark truth is that they should have won instead of being held to a goalless draw. In addition, Paul Hegarty was very impressed with them when he watched them beat Aberdeen last Saturday. I respect the way Saints are trying to play and have a combination of youth and experience in their side, so it promises to be a ding-dong battle. And if we are going to win - something we failed to achieve against Danny Lennon's side last season, we are going to have to be even better than we were at Tynecastle and that has to be the benchmark for every game this term.