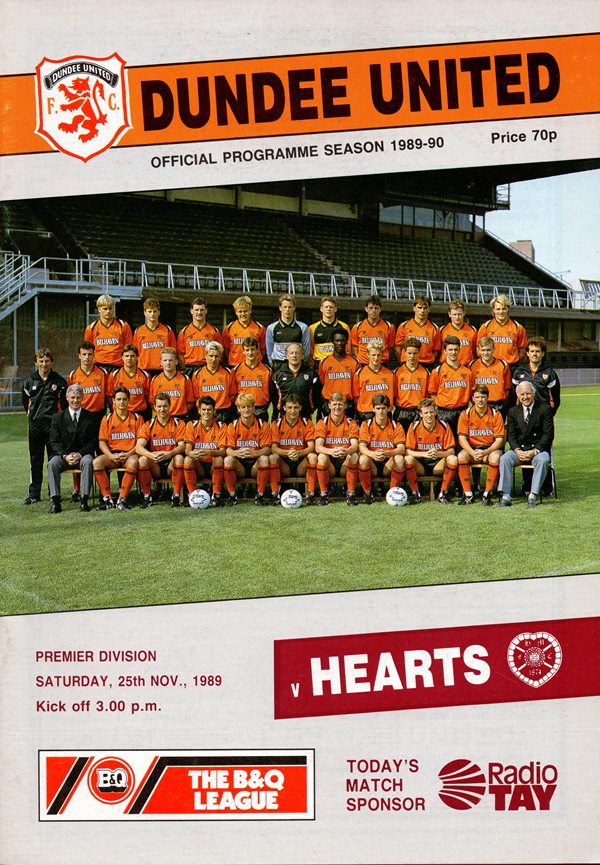 Victory at last - our leanest spell against any of the current Premier sides came to an end, but only thanks to a last gasp winner. Exchanges in the early part of the match were fairly even, but Hearts were to take the lead in rather fortunate circumstances. A cross from McLaren looked harmless enough, but Jim McInally palmed the ball away and Scott Crabbe put Hearts ahead from the spot.

The Tynecastle men took heart from this break and early in the second half Alan Main came to our rescue when he brilliantly turned a fierce drive from Mackay for a corner.

Gradually, however, we re-asserted ourselves and equalised in stunning fashion with sixteen minutes left. The ball broke to Dave Bowman and his rasping volley from just outside the box gave Smith absolutely no chance. With yet another draw looming large, we capped a fine come-back when we scored a last minute winner. Billy McKinlay played the ball up the left to Michael O'Neill and he quickly switched the ball into Mixu Paatelainen's path. The Finn carried on and deftly chipped the on-coming Smith to notch the winner. However, Hearts almost scored an even more dramatic equaliser when Dave Kirkwood fired in a 25 yarder which Alan Main touched on to the bar and the defence gratefully scrambled the ball to safety.

Last Saturday's win at Parkhead was, in my opinion, the first time we have adequately rewarded our magnificent travelling support for some 18 months or so. As usual I wasn't entirely satisfied with our performance, because we really should have won by a far bigger margin. Certainly we have been working our strikers exceptionally hard to improve their finishing and, fortunately, now that our schedule consists of only one game a week, there is more time to concentrate on individual weaknesses. I don't think people appreciate that a programme of two games a week doesn't afford you sufficient time for coaching, in between warming down from one game and preparing and resting for the next. As I know this is one page of the programme which the players don't read, I'll risk spoiling my image by complimenting them! Their attitude of late has been absolutely magnificent. Confidence is a very important part of the game and that had sunk to a low ebb because of poor results and performances. One way back is to get the attitude right and Dave Bowman's performances this term have typified exactly what is required. Whilst we still have a long way to go there is little comparison between some of our earlier performances and how we played at Parkhead. Billy McKinlay is another player who I would like to single out for praise. He has been under a lot of pressure to increase his work rate in games, and I hold my hand up and admit I expect too much but thanks to his hard work with Stuart Hogg to improve his stamina, Billy is now, and only now, one of the best midfield players in Scotland. Pushing Billy week in and week out has proved we were right and clearly demonstrates potential and ability alone are not sufficient, fitness being equally essential to make it to the top. I confidently now forecast that Billy McKinlay is an outstanding player in the making.

However, the entire squad has been a pleasure to work with of late after the earlier difficulties for them and us as we tried to find the right blend. Since the start of the season, we have been trying to establish what the capable of with Charlie Adam, Harry Curran and Alan Irvine having now and some of the younger players having proved that they are not good enough yet. With Miodrag and Freddy Van Der Hoorn we have been working on a new defensive blend, but now we are nearing a settled side, though I would still like to see whether Brian Welsh and Raymond McKinnon could enhance the team. It is also interesting to note that six of the thirteen on duty at Parkhead last week were aged 22 or under. I doubt if we could have a sterner test of our new sweeper system than posed by this afternoon's visitors, Hearts, with their style of play upfront. it is also encouraging to see a youngster like Scott Crabbe coming through, though it isn't so good that he is facing us today, but hopefully we'll record a long awaited victory over the top scorers in the Premier Division.