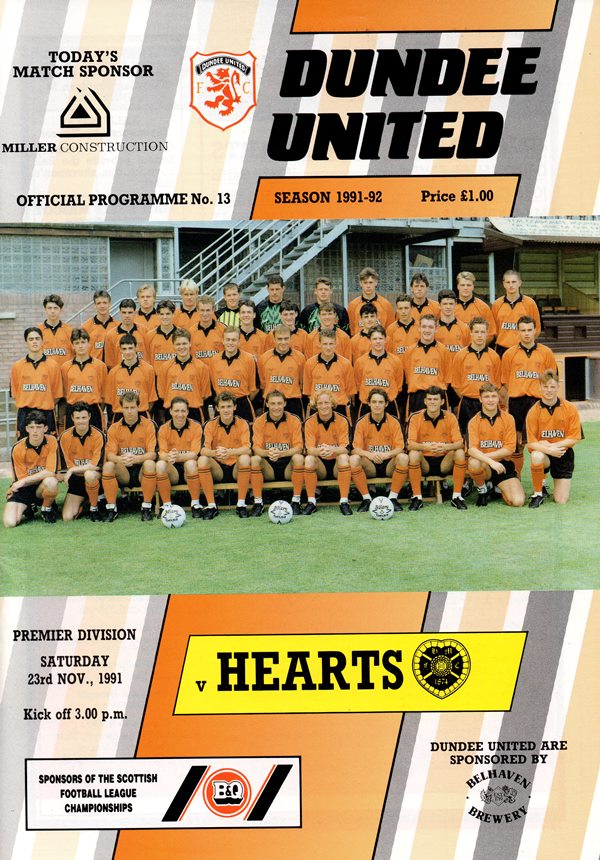 Encounters between United and Hearts are always fiercely contested and rarely does a goal separate either side. When both sides are on six match unbeaten runs and the visitors top of the league, it only serves to intensify the competitiveness of this particular fixture. Before the match, coach Paul Sturrock had forecast that it was unlikely to be a match for the purist. He was spot on in his assessment. During the first half, in particular, creativity was hard to find as both midfields cancelled one another out. It took some twenty-five minutes before either goalkeeper was tested. This followed a long ball played up field by McPherson which found Robertson in the clear and the Hearts striker's first shot was blocked by Freddy Van Der Hoorn and his effort from his follow up effort was well saved by Guide Van De Kamp. John Clark drilled a free kick just wide and then headed just past, and on the stroke of half-time Smith made the first of several good saves in the match when he tipped over a 20 yarder from Darren Jackson.

The earlier part of the second half followed a similar pattern, but in the 64th minute Hearts broke the stalemate with a goal out-of-the blue. Crabbe flighted the ball over from the right to Baird at the far post and he headed down to John Robertson who prodded the ball past Guide Van De Kamp. This certainly put life into the game and the introduction of Mixu Paatelainen almost reaped instant dividends as Duncan Ferguson headed one of the Finn's crosses from the left just over. Then came the flash point of a controversial incident. Ray McKinnon was felled by Wright as he made tracks towards goal. As the Hearts midfielder was being booked, the stand-side linesman flagged and the net result was the dismissal of Gary Mackay for an incident in the wake of the original foul on Ray McKinnon. From the ensuing free kick Henry Smith made a tremendous save from a viciously curling John Clark shot. We poured forward in search of an equaliser and almost grabbed one when McLaren directed a pass-back wide of Smith, but again the Hearts keeper was on the alert and dived to save an awkward situation.So our six match unbeaten run came to an end, though our efforts almost certainly merited a point from the last match to be played at Tannadice before the removal of the north enclosure to make way for a new two tiered stand in its place.

It is quite some time since I made reference to those magnificent and honourable gentlemen of the press.

To explain my sentiments can I just take you through a week in the life of a football manager and the trials and tribulations the press can bring.

Saturday Evening: I received a telephone call from a local Reporter after the home game with Hibs asking if Walter Rojas had been sent home.

Monday: Paul Sturrock took the daily Press Conference and was asked by other reporters if Rojas was going home. They were told that Walter had trained that morning as usual.

Tuesday: The story still appeared in some papers that Walter was being sent home. Remarkably, there were no other problems that day, but it was only the calm before the storm.

Wednesday: There is a report in two national newspapers that Liverpool are preparing a £1m bid for Ray McKinnon. I ask you how much preparation does it take to make a bid other than picking up a telephone and yet we have had no contact from Liverpool about any of our players. That same morning another reporter turns up at our training ground to seek confirmation about a story which so far hasn't hit the press.

Friday: I received a phone call from the Dutch press to say that Gijs Steinmann, though still under contract to Dundee United, was on trial with Heracles, which was made public earlier this week.

Saturday: Then on Saturday morning I open my newspaper and just about choke on my cornflakes when I read that Mixu Paatelainen is being linked with a Turkish Club.

I think that this timetable of events show the particular handicap under which football managers have to work.

The job is difficult enough without the added pressures imposed by all this speculative nonsense which we are forced to endure from some modern day reporters.

Taking this a stage further, on the Monday after the match against Hibs, my "favourite" paper, "The Courier", instead of giving us credit for taking nine points out of ten, turns its attention as to whether Hibs goal arose because of a mistake by our goalkeeper, casting doubt on whether Guido did, in fact, make a mistake.

Then again after last weekend's match with Falkirk when we extended our unbeaten run to six matches, the same Courier reporter leads with a story about Ferreyra diving.

Perhaps this is due to the fact that Steve Bruce has had to suffer the recent indifferent form and poor results of his first love — Aberdeen!

Coping with the national press is difficult enough but becomes well nigh impossible with local reporters who must make their thoughts known.

After last season's Scottish Cup Final, I, along with many United supporters, disagreed with 'The Courier's Sports Editor's' view of the match.

Now it appears that the type of press we receive from the other half of the Courier's main football writers depends on how Aberdeen have fared!!

Even without getting the due credit they deserve in the press the players efforts in the past few weeks have been magnificent.

However, the further improvement in performance I requested recently over and above what has brought us eleven points out of twelve will be absolutely essential against Hearts this afternoon.

Everyone who was at the Falkirk game will realise that if the players continue to play for only parts of the game, it will as it has in the past, cost us points.

The recent form of Hearts means that nothing less than 100% for the whole 90 minutes, will give us a chance of securing a victory which is so vital to us.