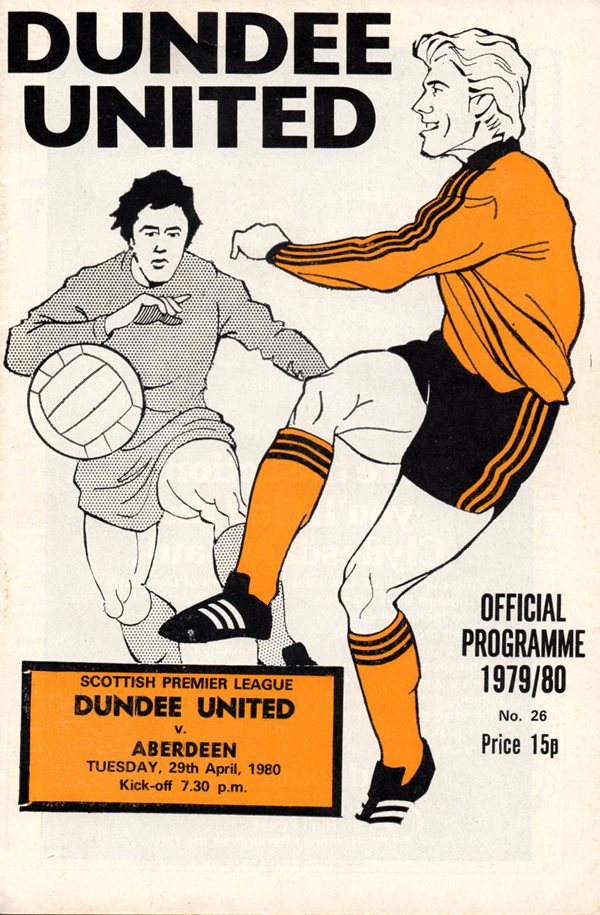 A New Firm confrontation is one more normally associated with early season than a fixture with which to sign off from the league campaign. More often than not the Don's did come to Tannadice late in the season, it was due to the rescheduling of an earlier postponed match and that was indeed the case when Aberdeen last brought the curtain down on the home league programme. Season 1979-80 was the year in which the Old Firm's dominance of the three major trophies had come under fire. United, of course, had beaten Aberdeen in the League Cup to win our first major honour, and although Rangers and Celtic were to contest the Scottish Cup Final, Aberdeen came to Tannadice in April 1980 as clear favourites to break a 14 year 'Old Firm' stranglehold on the League Championship. There was undoubtedly a feeling in the Tannadice camp that we wouldn't begrudge the Dons that title — as long as it wasn't at our expense. The position was that Aberdeen had three matches remaining and were level on points with Celtic, but had a game in hand and topped the table thanks to a superior goal difference as they headed into this Tannadice examination of their championship credentials. United, despite the League Cup success, were in fifth place in a three way fight for fourth spot with Rangers and Morton, but a U.E.F.A. Cup spot was already in the bag thanks to the League Cup triumph. United had Paul Hegarty and John Holt back in the side, whilst Andy Graham was making one of his only three Premier appearances for the club in goal in place of Hamish McAlpine who was injured. Aberdeen, meantime, preferred the experience of Drew Jan/ie to young Andy Watson for the vital occasion.

Alex Ferguson's men got off to a good start giving the Tannadice defence a fright as early as the second minute. Archibald hit a thirty yarder which squirmed out of Andy Graham's arms and trickled past the far post for a corner. The visitors, in fact, showed no sign of nerves during the first half, in which they were well on top. Their pace and aggression appeared to upset United and they went ahead after quarter of an hour. The Dons may have been lucky to get a free kick when Dave Narey's firm tackle on McGhee looked legal enough, but Gordon Strachan took full advantage, smashing the free-kick into the far corner with Andy Graham an enforced spectator. Believe it or not but that was the first league goal conceded by United at Tannadice since Celtic had scored in November, 11 matches previously. Indeed it was one of only six goals conceded in 18 home league outings all season! The Dons carried on where they had left off after the goal and come the interval their superiority could be measured by Bobby Clark in goal not having had one direct shot to deal with!

At half-time, manager Jim McLean brought on Ralph Milne to replace Willie Pettigrew and four minutes into that second period, the Tangerines drew level. Paul Sturrock fashioned the move with a pass to Billy Kirkwood on the overlap and the Dons defence was all at sea when the cross came over, allowing John Holt, who was completely unmarked, to score with a powerful header from Billy Kirkwood's cross. That goal silenced the Aberdeen fans as United at last began to get things together. The second half was diametrically opposite to the first half as United engaged in all the attacking and five minutes from the end only a great save by Bobby Clark prevented Ralph Milne from giving United both points. On their first half showing Aberdeen might easily have had both points, but in the end they had to dig into their defensive reserves to salvage a single point.

Good evening and welcome back to Tannadice for this, a fitting ending to our home programme, with Premier League title hopes Aberdeen our visitors. As far as I am concerned, the disappointment I feel concerning tonight's occasion is that unfortunately it is not ourselves who are still involved as our opponents are in championship-chasing. Needless to say my disappointment in that is shared by you amongst the crowd with United leanings, and to you especially I pass on my sincere thanks for the backing you have given us this term. Never before during my spell at Tannadice have I known such an improvement, not only in numbers but also in encouragement. Thankfully our League Cup win at last gave you, our supporters, something to be proud of, but in general the season has proved to be a bit of a let-down to me personally. As always I had hoped for more — I always do — but appreciate that several factors like untimely bouts of injuries and absences allied with spells of lost form by certain individuals, did not aid matters.

However, the aim is upwards towards greater things for the club — make no mistake about that. There can be no feeling of complacency around the club — that would prove disas trous. If there is one thing that I have learned in my years here in management it is that any hint of complacency leads only one way — downwards. We have made upward steps in recent years, in fact we have gone a long way. But I will never be satisfied with less than being the best. Dundee United now clearly have the respect of those in the game who used to look down on us. Sadly for me, the season now almost behind us has thrown up more than a few stalemates and single goal wins — in keeping with the League we are in. Well, as far as I am concerned, I would gladly have given up our fine defensive record here at Tannadice to have given you the excitement of viewing say 2-2 draws or 3-2 wins. Finally, tonight's game has always proved to be an attractive fixture in the past, and I see no reason with the incentives facing Aberdeen that the next 90 minutes shouldn't have just that touch extra in entertainment value.