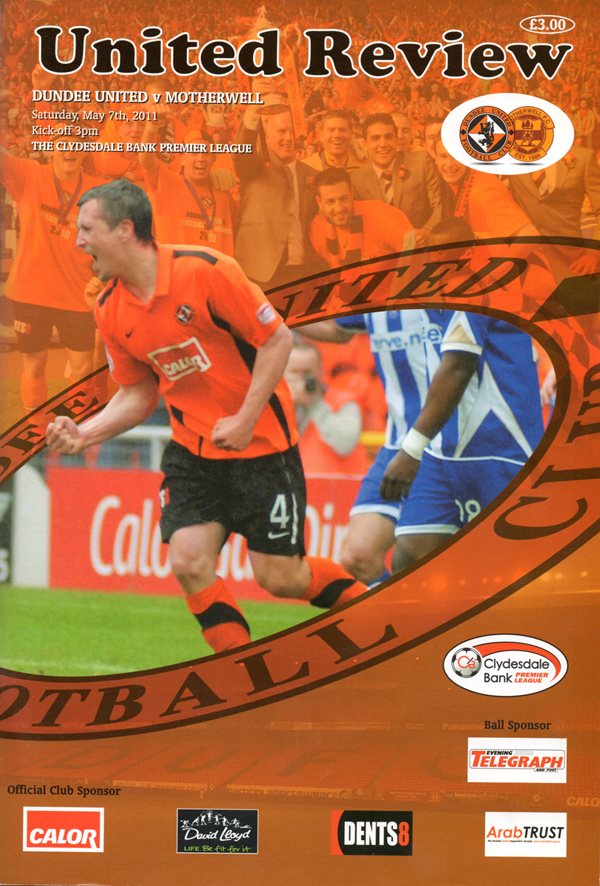 Peter Houston made three changes to the side that lost to Celtic last Sunday, with Sean Dillon and Prince Buaben dropping to the bench and there being no place in the squad for Danny Swanson. In for them came Keith Waston, Johnny Russell and captain Jon Daly.

The opening quarter of an hour belonged to an attacking United as they did all the pushing and this was to create three chances in as many minutes early on. First, a neat one-two between Morgaro Gomis and Johnny Russell allowed the latter a sight of goal but his shot from just outside the box flew harmlessly over. The pressure was to eventually tell after 35 minutes. Ross Forbes was booked for a trip on Gomis in the middle of the pitch and from the resultant Paul Dixon free kick, Jon Daly ghosted in at the back post and his downward header was allowed to squirm in between Randolph and his post to give United a deserved lead. Eight minutes later and hands were up around Tannadice for Jon Daly once again. The Motherwell defence failed to deal with a low through ball from Garry Kenneth and Jon Daly was there to swivel and hammer the ball past Randolph from six yards to double United's lead.

Dalys hat-trick was to be completed just four minutes after the break. Possession was held up well on the edge of the box by Russell before he fed Dixon who dinked the ball into the area. Gavin Gunning mistimed the flight of the ball and Jon Daly was there at the back post to control the ball and fire home to put United three up and cruising. David Goodwillie was still doing his best to get on the scoresheet and nearly did with a cross-cum-shot on 83 minutes but the ball landed on top of the net rather than in it. He came even closer three minutes later when Paul Dixon's cross was headed back in by David Robertson where Goodwillie was waiting to power a header at goal that Randolph did well to push wide. However, from the resultant corner, United did get their fourth. Dixon's delivery to the back post was headed back across by Kenneth. The ball was half cleared before Keith Watson's low ball back in was missed by everyone and trundled into the back of the net to complete a great afternoon for the home side and give the young defender his first goal for the club.

To say the least, the last two results and performances have been completely contrasting, going from the great win against Kilmamock to the disappointment of last Sunday's defeat at Celtic Park. For the first 70 minutes of that last home game against Killie, it was our best performance of the season. We started brilliantly, and even when we went down to ten men to allow Goodie to have stitches inserted, we were still on top. The first three goals - all headers - were great, and that's unusual for us when Jon Daly isn't around. No matter how much you cajole players, they are always going to get sloppy in the last 20 minutes when you are four up, but I'll take that any time. But it was a great way for us to bounce back after the Rangers defeat and I take pride in the fact that the players have always reacted to disappointment in the past, so I had a lot of faith in them. Unfortunately, last Sunday must rate as one of our worst defensive performances of the season with Celtic getting their goals too easily. Yet, I thought I fielded our most experienced back four, but have to concede, it didn't look that way. If you are going to give goals away like that then a good team like Celtic are going to punish you and that's what they did. We were two down before we started to believe in ourselves. We passed the ball for fun against Kilmarnock the previous week but lacked belief at Parkhead. We were nowhere near the standard we set ourselves. After that, as the boys have done in the past, I'll be looking for them to bounce back this afternoon as we try to put fourth place to bed this afternoon. But we know it won't be easy against a Motherwell side that many see as our bogey team this season, which is true, but only at Fir Park!

I must point out that we had a good result and performance against them here just after Stuart McCall had taken over when we beat them here 2-0 in January. But I have nothing but admiration for what he has achieved in the short time he has been there alongside Kenny Black. And whilst I am obviously disappointed that we lost out to them in the Scottish Cup, I am delighted that they have made it through to the final. And I wish them all the best and would like to see them go on and win it - so long as it doesn't cost us a European slot! They arc a good side and if we are going to win this afternoon, we'll have to be at our very best because we know that the Motherwell players have cup final places up for grabs. You tend to find that players who may be on the fringe of things and get a run will be out to impress and psychologically get that wee lift as they try to impress the manager, so we know it is going to be a tough fixture.