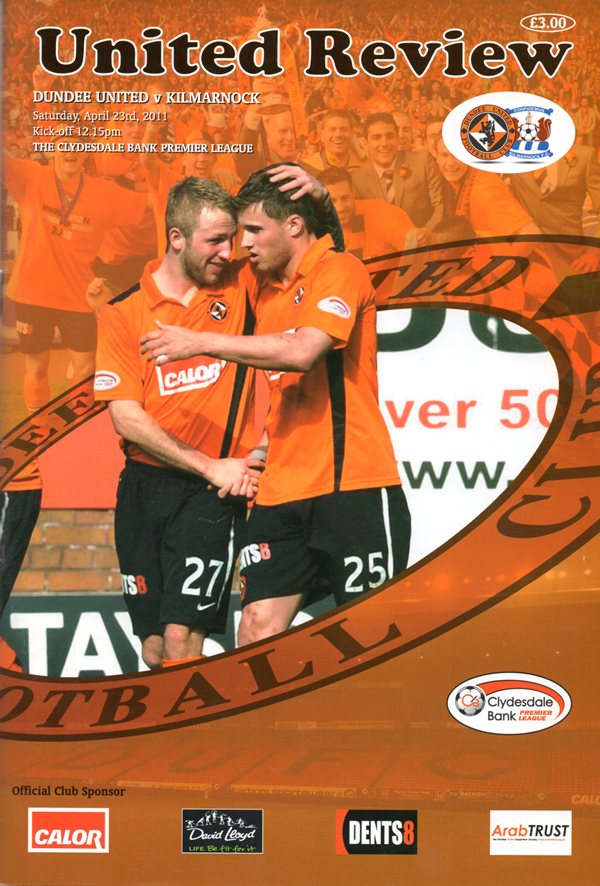 Peter Houston made four changes to the side which had lost 4-0 at home to Rangers mid-week. In came Barry Douglas, Keith Watson, Prince Buaben and Craig Conway in place of Johnny Russell and the suspended trio of Sean Dillon, Morgaro Gomis and Mihael Kova?evi?.

Kilmarnock simply couldn’t cope with our dominance as we bossed the match from the early stages with Scott Robertson firing a chance across the face of the Kilmarnock goal as early as the 3rd minute as he burst into the box on the right side coming onto a neat lay-off from David Robertson. Incidently that move also saw a shocking challenge made by Kilmarnock’s Pascali on David Goodwillie just inside the Kilmarnock half but more to come on him later. In the 4th minute David Goodwillie chased a long ball from Garry Kenneth on the right and just as it lokked as though the Kilmarnock defender had the advantage Goodie robbed him of the ball on the touchline and drove into the box and from a very tight angle 8 yards from goal crashed a shot off the underside of the bar. 6 minutes later Goodie would again be in an altercation with Pascali as the United Striker made a run in behind the defender to get onto a Prince Buaben ball down the right channel Pascali cruelly threw out his left arm and caught Goodie on the top lip and the United man had to go off for treatment. Down to ten men United were still searching for the opener and it almost came in the 12th minute, Prince Buaben took the ball for a run down the left side and the Ghanian’s pass picked out Danny Swanson ten yards from goal, Danny tried to slot the ball home at the near post only to be foiled Bell. A minute later Pascali deservedly found his name in the referee’s book as Barry Douglas swung a ball from the left back spot to pick out Garry Kenneth who was still up there following a corner and this time it was the big defender who was to get Pascali’s elbow in the face as they both went for the high ball. From the resultant free-kick Barry Douglas could only look on in despair as his 20 yard effort cannoned off the top of the bar. Kilmarnock had barely got out of their own half but United did survive a scare in the 16th minute as Eremenko drove a shot from 25 yards at Dusan Pernis’ goal and the big Slovakian was equal to it and punched the ball high up in the air, bizarrely on the way back down it came off the top of the crossbar and back into play, Dusan was alert enough to come and collect the ball and although he appeared to be fouled in the process the referee awarded Kilmarnock a corner without the ball actually ever going out. In 22 minutes after great build-up play, Craig Conway worked well to drive down the left and threw a ball into the box which was met at the front post by David Robertson who tried to flick the ball goalwards only for it to bounce harmlessly along the six yard box. United did get a much deserved opener in the 25th minute after an excellent corner from the right from Craig Conway was met by Scott Severin 8 yards from goal who powered a header that left Bell in the Kilmarnock goal helpless for the defender’s first goal in a tangerine jersey. Three minutes later Kilmarnock threatened to equalise as Gros was the benafactor of Prince Buaben’s missplaced pass and with the Kilmarnock man bearing down on Pernis’ goal he completely fluffed his shot with Garry Kenneth in close attendance, Gros appealled in veign for a penalty but this would fall on deaf ears as the referee wasn’t interested. United doubled their lead in 38 minutes again from another Craig Conway corner, this time he played it short to Danny Swanson who then played Craig back in on the right and the winger put in a delightful cross 7 yards from goal this was met by David Goodwillie who was flying through the air and bulleted a header past Bell and into the corner of the net much to the delight of the Arabs in attendance.

United came flying out of the traps in the second half not content with a two-goal lead and within two minutes of the restart went further ahead a corner on the right from Craig Conway was headed out and Scott Robertson won the ball on the edge of the Kilmarnock box and it was fed back out to the right to Craig Conway who with a beautiful whipped ball turn found David Goodwillie with pinpoint accuracy on the 6 yard line to bullet his second of the afternoon. A minute later and Kilmarnock had barely restarted the match only to find themselves three goals down as United attacked the centre once again through Craig Conway and he worked a one-two with David Robertson on the edge of the box and found himself free 20yards from goal to unleash an unstoppable effort that flew past Bell high into the Kilmarnock net for United’s fourth and arguably the pick of the bunch. The game was over as a contest by that point and there wasn’t any goalmouth action at either end until Kilmarnock got one back in the 70th minute through David Silva with there appearing to be no danger he found himself free 25 yards from United’s goal and he hit a low drive into the bottom corner of Dusan Pernis’ net. In the 77th minute after some slack play from Kilmarnock in the midfield the ball fell to Craig Conway just inside the Killie half and he had the freedom of Tannadice and powered forward keen to add to his tally for the day and with four men in blue surrounding him, Craig shot at goal only to see his effort blaze over the bar. United again again asked questions of the Kilmarnock defence when Prince Buaben picked the ball up in his own half and played a neat one-two with David Goodwillie down the right channel and the former fancied getting in on the goalscoring act and drove a low shot from 25 yards which went past the desperate dive from Bell but, unfortunately for United also went a yard past the far post. Kilmarnock still trying to get something from the game and in the 82nd minute got the break of the ball in midfield and Eremenko fancied his chances from 20 yards and drove an excellent shot but once again he was foiled by a tremendous save from Dusan Pernis who dived full length to get a strong hand on the ball to push round the post. In 85 minutes the referee waived away United’s appeals for a penalty after a good run down the right from David Goodwillie who got to the bye-line and tried to find Scott Robertson’s run at the near post with a dinked cross but just out of Scott’s reach it flew across the six yard box and with no impending danger at the back post Killie defender Stevie Hamill slipped on the ball as he tried to chest it back to his goalie it appeared to have come off his elbow as it squirmed under him on the greasy surface. A minute later Kilmarnock clawed back the deficit from a corner on the left by Silva and it was met by the near post run of Manuel Pascali and he glanced a his header into the back of the United net for Kilmarnock’s second and final goal of the day. Both Clancy of Kilmarnock and Garry Kenneth were cautioned in the aftermath of that goal as they became tangled up in the net as Clancy went to retrieve the ball. A minute into injury time United once again looked to add to their tally as substitute Johnny Russell broke from his own half and drove at the Kilmarnock defence who had only two men back and couldn’t match the run of David Goodwillie, Johnny found his striking partner just inside the box looking to get his hat-trick Goodie tried to chip Bell only for the ball to fall comfortably into the grateful ‘keepers arms. .

Tuesday evening's defeat to Rangers was obviously a very disappointing one for all of our supporters and everyone else connected with the club, but I also worry over the direction in which the game is going. Here we had situation of three of our players been shown straight reds as they conceded penalties. First I must make it clear that I have no complaints about the penalties that were awarded. Yet we had three men sent off. If I thought the discipline was poor at the club, I would have no hesitation in reacting to that, but instead I was proud of the way the players played. They rode out the first half after going a goal and a man down, passing the ball about pretty well. Indeed, I thought we snuffed them out with really the only chance they had other than the penalty was from Lafferty who fired over. In the first half we had the best player on the park in Danny Swanson and we played well with not a lot of chances being created. However, when you lose a second and then a third man, it had to be a case of damage limitation. The first penalty might have been worthy of a sending off, but Jelavic was going away from goal when he was fouled by Dillon for the second and Morgaro just nudged Diouf and I can't see how those two can be deemed denying a goal scoring opportunity. But what does disappoint me is that with red cards being flashed for offences like those, the game is becoming a bit of a farce. If this becomes the norm, it will only drive punters away. The referees might in the very strict sense technically be right, but I think they are in danger of spoiling the game. As we enter the five post-split games, we have to put Tuesday's woes behind and get on with the job of preparing for a huge game against Kilmamock this afternoon. But of course, we can't completely do that as Mihael Kovacevic, Sean Dillon and Morgaro Gomis are suspended as is Paul Dixon who served the first of his two-match ban in midweek - and three of those are defenders. Nevertheless, I believe that we will still be able to field a defence with which I'll be happy. Keith Watson could be back from injury and the central pairing of Carry Kenneth and Scott Severin are unaffected with Barry Douglas on the left. In midfield, there are plenty of alternatives to cover the loss of Morgaro. Craig Conway was on the bench on Tuesday and didn't come on, while Prince Buaben started there, so there are good players there.

Don't get me wrong, it's not ideal, but we know we'll still have a strong team. And from past experience, I expect the players to bounce back from adversity, something they have made a habit of in the past. The big difference this time is the result they're looking to recover from wasn't down to them, but other circumstances.