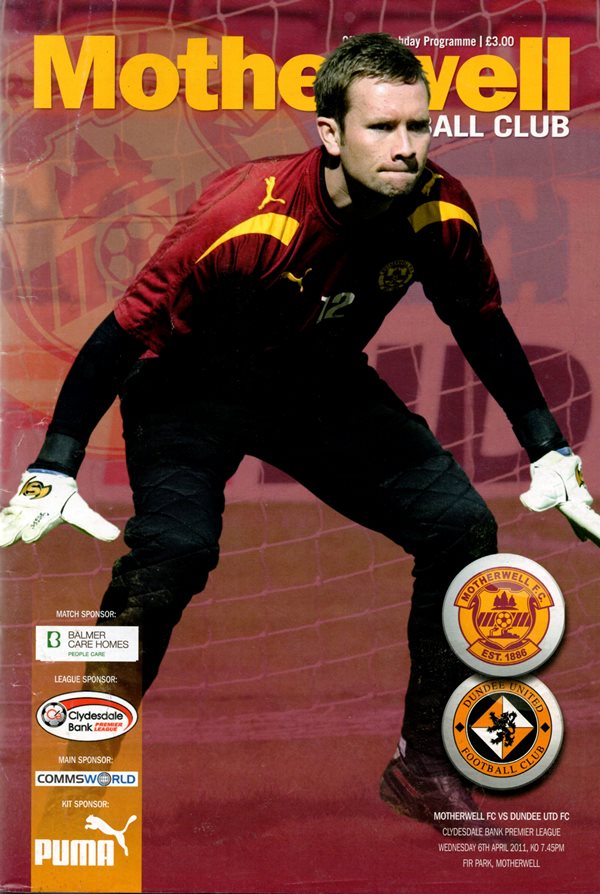 United slumped to two Fir Park defeats inside a week for a second time this season as they again failed to deal with the threat of a resurgent Motherwell side. Despite going two goals behind before half time, there was no repeat of the annihilation sufiFered last midweek in the Scottish Cup as a spirited second half comeback nearly saw United grab a point. Danny Swanson and Barry Douglas dropped onto the bench, with Scott Severin making his first start since the last league game at Fir Park In October and Craig Conway returning to the starting line-up in a conventional 4-4-2 formation.

Early on, Motherwell looked jittery. Stephen Craigan sliced a dangerous Paul Dixon cross over the bar, before Johnny Russell forced his way beyond the Motherwell defence before driving in a long range effort that Randolph did well to get down to. After 24 minutes, Morgaro Gomis played a good ball into David Goodwillie who, despite being 30 yards out, controlled the ball before firing in an effort that was well held. However, just a minute later, United's promising start was undone as Jamie Murphy took advantage of space inside the box and side-footed in an effort from an acute angle that beat Dusan Pernis. United were now struggling to recapture their form of the opening stages. No surprise therefore that five minutes before the break, Motherwell doubled their advantage. The dangerous Chris Humphrey brilliantly controlled the ball midway into United's half, completely deceiving Dixon, then powered towards goal before shooting from the edge of the box. Pernis appeared to have tipped it over, but the ball dipped just under the crossbar.

With Housties' interval words undoubtedly ringing in the players' ears, United set about trying to turn the game around. Within a few minutes of the restart. United had fashioned three good chances. The arrival of Garry Kenneth in place of Keith Watson saw him partner Severin at centre half, with Sean Dillon moving to right back. Back in his more natural position, Dillo immediately sent over a cross that dipped just over. Scott Robertson then fired in a shot from the edge of the box was well turned away by Randolph. After 12 minutes of the second half, powerful running from Goodwillie saw him drive into the box before falling under a heavy challenge. But referee Stevie O'Reilly waved away United's vocal claims for a penalty. On the hour mark, in a now rare Motherwell second half attack, Tom Hateley battered in a dangerous curling free kick from the right that Pernis did well to parry away. However, a reinvigorated performance in the last 20 minutes nearly earned United a deserved point. First, good footwork from Goodwillie had a decent effort well held. However, United had a lifeline when a fine inswinging comer from Dixon on the right was met by another impressive leap by Johnny Russell, who back-headed the ball home with 11 minutes to go. A minute later Swanson brought out a fine save from Randolph and with four minutes remaining, a well worked move saw Jan Daly flick the ball on to Russell, but he fired into the side netting. And with the two minutes of stoppage time almost up, Swanson somehow worked a way through to find Goodwillie, but Randolph superbly turned away his effort for a corner.

Man of the Match: Scott Robertson. Was central to United's pressing game in the second half and was always looking to drive forward. Alongside Swanson, Russell, Gomis and Goodwillie, he nearly led his team-mates back from the brink.