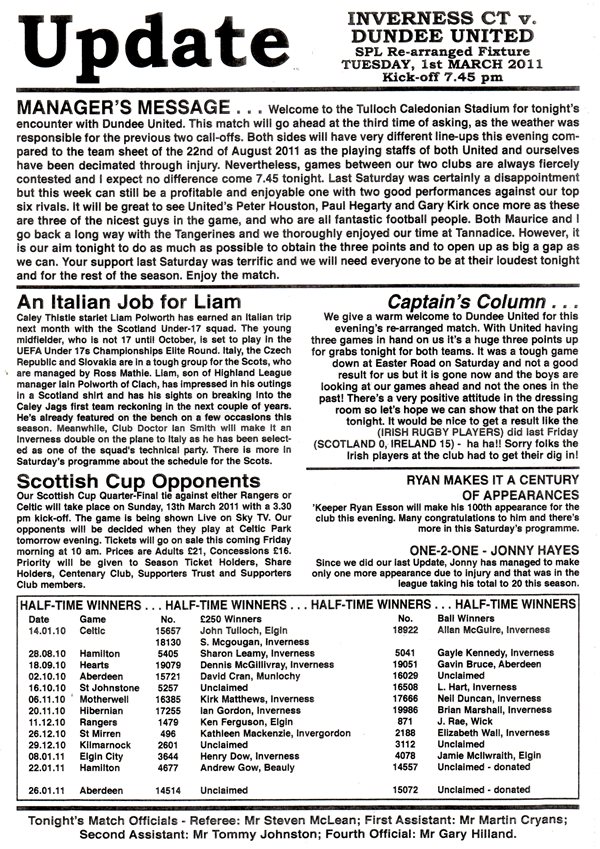 On a perfect evening for football in the highland capital, the hosts threatened first with a Lee Cox shot being blocked and shortly afterwards Grant Munro rather ambitiously fired well wide from 25 yards. However, United raced to the other end and Ross Tokely almost chopped Craig Conway in half after 8 minutes to pick up the game’s first booking. From the resultant free kick, Richie Foran was at full stretch to head Douglas’s kick away for a corner. And when the kick came over, the ball fell to Goodwillie, but he couldn’t get the power or direction on his shot to score. But on 12 minutes, Caley Thistle produced a sweeping move that would have brought the equaliser, but for a fine save from Adam Rooney’s header after a great run and cross by Johnny Hayes. Four minutes later, ex-United Stuart Duff stung Pernis’s hands, but the United keeper collected at the second attempt. Terry Butcher’s side continued to make most of the running and Aaron Doran pulled a shot wide of the near post from the edge of the box. At the other end, Tokely skated on thin ice when he brought down Conway again, but escaped a second card, though it looked as though he got the ball. Unfortunately, the free-kick was wasted. A speculative backheeler from Goodwillie went wide of the mark, but it was Caley who looked by far the more convincing on the attack as demonstrated by Hayes whose cross cum shot flashed just wide of the far post. With the travelling band of Arabs not having had too much to shout about, Scott Roberton sent a shot just over after 36 minutes. And a minute later, a Morgaro Gomis effort was deflected for a corner. Before that was delivered, Innes was booked, but again the set piece was wasted. The half ended with United’s best spell of pressure, but without finding a chink in a retreating Caley side, though Swanson did fire one just over before the break. However, it was the home side who almost grabbed an interval lead, Dixon blocking a Cox effort.

Within a minute of the re-start, Goodwillie tested Ryan Esson forcing him to push his shot from the edge of the box away for a corner. Again, however, the corner came to nothing being gobbled up by Esson under no pressure. Starting to look increasingly dangerous, United’s best effort so far came 12 minutes after the restart. A Conway corner was cleared, but only as far Swanson whose volley from 22 yards went through a ruck of players and Esson did well to scramble the ball away for a corner. It wasn’t until midway through the second period that the Inverness side threatened, and it came on the counter attack with Cox powering a header over from a Foran cross. That sparked a spell of pressure by the home side with ball flashing across the face of the goal but with no takers. That signalled the entry of Prince Buaben replacing teenager Armstrong after 74 and with his second touch he scored. His first was a shot that went high and wide. With his next a minute later he side-footed United ahead from Goodwillie’s cutback. With 12 minutes to go David Robertson replaced Swanson, but almost immediately Caley Thistle had a chance. Munro launched the ball from just inside the United half and found Rooney but he headed past the near post. Shala had only just replaced Conway when he had the chance to put the game to bed. He got the ball ahead of Esson, but his netbound shot was cleared off the line by Hogg. Then in the last minute of the regulation 90, Goodwillie made a powerful run in from the right and his pass into the middle fell to David Robertson who rifled the ball low into the bottom left hand corner and it was game over as United registered their first league win on the road since beating Hamilton in November.