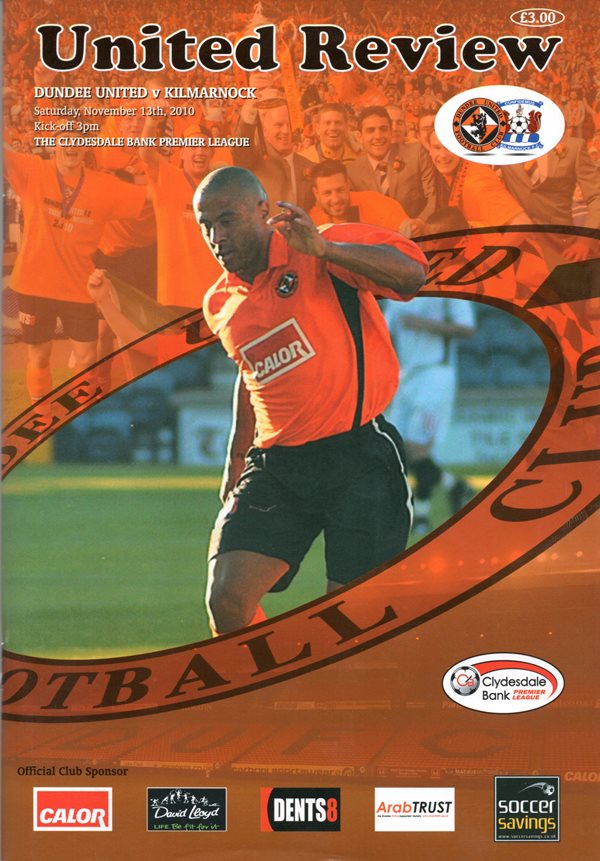 United were the more aggrieved at only earning a point after creating most of the chances in this richly entertaining affair, both goals came within a minute as Conor Sammon drilled Killie into the lead only for Johnny Russell to respond immediately, scoring his first goal at Tannadice. The home side were left to rue two late Jon Daly misses, thereby passing up the opportunity of closing the gap on the teams above.

After the disappointing home defeat to St Mirren in midweek, Peter Houston made two changes to his line up as United looked to atone against Kilmarnock. Danny Cadamarteri and David Robertson dropped to the bench and in came Barry Douglas and Johnny Russell, making his first home league start, to give the side better balance. Danny Swanson was on a strong looking home bench which also included Jon Daly and Ryan Dow. Visitors Kilmarnock were high in confidence coming into the game after a trio of 3-0 victories had lifted the Ayrshire club up the table to within just one point of the Tangerines. Setting the tone for the ensuing 90 minutes, there was an audacious attempt on goal straight from the kick-off as David Goodwillie took a pass from Russell to launch a teasing shot that Killie keeper Cammy Bell only gathered clumsily at the second attempt. And as United showed they meant business, moments later Prince Buaben sent in an inviting cross, with which Carry Kenneth just failed to connect. Another headed chance came in nine minutes as Kenneth raced onto a Watson ball down the right and swung in great cross, but Russell's glancing header from a narrow angle drifted wide of the far post. Although Sammon had already threatened and Frazer Wright headed home only for it to be disallowed, Killie's opener after 22 minutes was still against the run of play. Taouil drove forward from midfield and his neat reverse pass released Connor Sammon and he drilled a shot into the bottom comer. United fans had no time to dwell on any injustice, because within a minute, Prince Buaben's cleverly threaded the ball through to Johnny Russell who poked it into the far corner. In a contest that was truly end-to-end, Killie would have retaken the lead two minutes later, but for a great one-handed Pernis save to deny Sammon before Dixon lunged in to clear from Bryson who was waiting to pounce on the rebound. In first half injury time, Douglas' free kick was within inches of giving United what would just about have been a deserved lead.

There was a slower start to the second period with United creating the first chance after 56 minutes, Buaben played a sublime ball to Russell who took the ball on his instep to create space for a left foot shot, which Bell did well to gather. Bell then had to tip a Goodwillie snap-shot from the edge of the area over the bar. There was a heart in the mouth moment for United in the 75th minute as an Eremenko shot spun ofifBuaben and a prostrate Pernis could only watch as the ball bounced wide from the corner, Pascal! headed over when he really should have hit the target. Pushing hard for a winner in the latter stages, sub Jon Daly squandered a glorious opportunity in the last minute. Goodwillie did well to regain possession on the right flank and swung over an inviting cross, but the striker headed right straight at Bell. Daly then had his head in his hands right on full time after Gomis put him clean through, but his shot drifted agonisingly wide.

Man of the Match: Russell and Kenneth were amongst several strong, but the biggest influence for United was Barry Douglas. On the left side ofmidfield, he worked tirelessly and Unked the play to great effect and it is clear his dead ball ability will be a potent asset for the Terrors.

It hardly needs me to remind everyone how disappointing we were in losing to St Mirren in midweek. But we could have no complaints about it, because there can be no hiding the fact the better team won. St Mirren were hungrier than us and passed the ball better than us. In fact, all the things that we are normally good at, we failed to do. Because they pressed us so hard, we became frustrated. Even our good passers of the ball were making errors, and I don't know why that was. We made wrong decisions and didn't have any great width in the team. I put Ryan Dow on early in the second half in the hope he'd give us a bit of the width that we have been so lacking recently, but it is difficult to ask a young player to do that when so many others were having an off night. Whilst not wishing to be over-critical of the players because normally they work their socks off, but that is the poorest we have been since the Inverness defeat here. What was so disappointing was that Saints had more desire to win the match than we did and whilst that isn't something I can complain about very often, we'll have to find out why the players were so lacklustre.

On the injury front it wasn't a good week either with Craig Conway, Darren Dods and Scott Severin all requiring surgery for their injuries, meaning they'll all be sidelined for sometime, but at least Danny Swanson could be back in contention for today's game with Kilmarnock. And it is good that this game follows so quickly on the back of Wednesday's setback, albeit against a Killie side bang in form after three straight 3-0 victories. Of one thing I am sure, is that I'll get a reaction from the players after Wednesday's defeat, because what we have at this club is a bunch of the most honest boys in the country and they will respond accordingly.