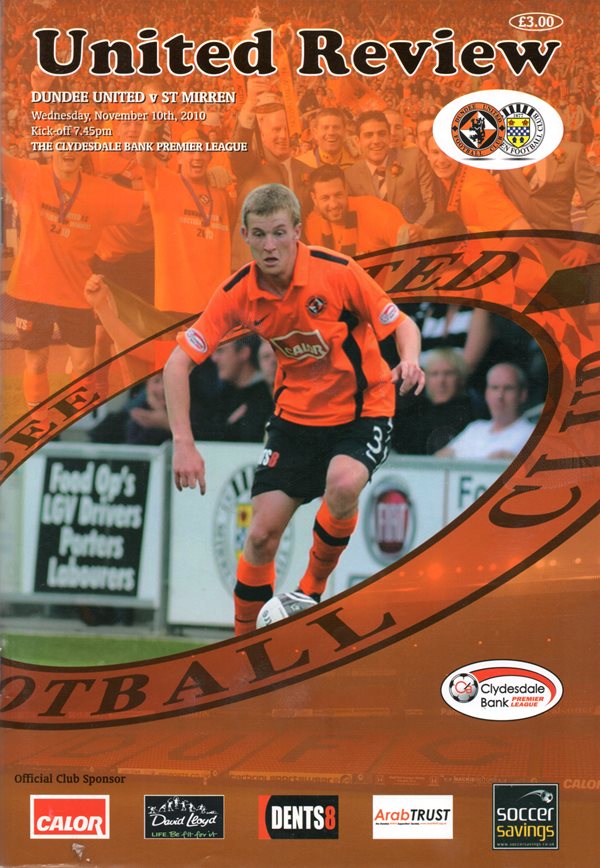 A stunning free-kick by Prince Buaben was not enough to save United from a hugely disappointing defeat. A goal in each half from Michael Higdon was enough to hand the visitors a deserved three points. After netting the winner against Hamilton on Saturday, David Goodwillie was recalled to the starting line up which meant Johnny Russell dropped to the bench.

The visitors made the brighter start and early on Higdon and Garerth Wardlaw had efforts at goal. The closest United came was on the quarter hour mark when Scott Robertson fired over from 20 yards. With very little happening at either end, it took the first real chance of the night to break the deadlock when Michael Higdon took advantage of a defensive slip and fired past Dusan Pernis five minutes from the interval. A minute later St Mirren almost doubled their lead when Lynch headed over from close range.

To be honest the second half was much of the same, but on the hour mark Goodwillie headed a Scott Robertson cross that was well saved by Samson. However four minutes later the visitors did increase their lead when a cross from McGowan was misjudged by the United rearguard and Michael Higdon's fine close control and ensuing volley left Pernis helpless. Peter Houston introduced Russell to the game to liven things up and with sue minutes left he won a free kick after a great run. Prince Buaben stepped up and blasted the ball into the top corner of the net to set up a nervy finish for the visitors. With time running out Jon Daly went close with a header from a Dixon cross, but it was not to be for United on a poor night all round.

After the defeats by Celtic and the double dunts at Motherwell, I said I'd be delighted if we could grind out a 1-0 win to get back on a winning track. Having achieved that not only against Hibs, but also against Hamilton, I am even happier. Certainly, we had to dig deep to beat Hibs which highlighted the character within the squad. Of course, we had much to thank Dusan Pernis with him saving John Rankin's penalty. It again emphasized the quality of the big keeper who has been terrific. He's very much a calming inOuence on the whole team. Nothing ruffles him and I was really delighted for him. David Goodwillie got our winner against Hibs as he did again at Hamilton last Saturday, proving once again what a talent he is. He is as good as anyone in the SPL as far as I'm concerned and the world is his oyster if he starts to concentrate solely on football. He has got to screw on the head and try to take on board what I and previous managers have tried to tell him. We hope the penny drops. What I can make sure of is that it becomes very, very difficult for him to go out on a Tuesday night. Enough has been said and written about the events in Glasgow that meant he and three other players being involved in an incident in the early hours of last Wednesday. Suffice to say I felt let down by them, but there was no alternative but to include them in the squad for Hamilton at the weekend, because we had a Scottish Youth Cup tie at Hearts and with the injuries that we had without them, I wouldn't have had 18 players available. Goodie didn't start because I believe players should prepare properly from Monday to Friday. However, every cloud has a silver lining, and with JonDaly not fully fit. Cads and Johnny Russell came in and worked the Accies defence really well. They ran their socks off, ran them into the channels and did all the bits and pieces that make defenders tired. But crucially, the goal never came and. again, it gets back to us needing to score more goals from other areas of the park. You look at Scott Robertson's chance in the first 15-20 minutes or so — the whole place has opened up for him and he's snatched at it. These are the things we've got to continue to work on in training — to make sure midfield players chip in with some goals. We might have an embarrassment of striking riches — but it won't count for anything unless the goals start coming from elsewhere. Morgaro Gomis is the only player outside of Jan Daly and David Goodwillie to find the net this season. As yet it hasn't happened — but if we win 1-0 every week and it's a striker that scores, you won't hear me complaining. The performances of the two strikers on Saturday has given me food for thought, especially as Jan Daly is okay now.

St Mirren, whom we welcome this evening may be at the bottom of the league, but I can assure the fans that we'll be taking nothing for granted. They are big and uncompromising at the back and win headers and stifled Rangers in the first half at the weekend when I watched them. To be honest, they lost a couple of poor goals and they'll be disappointed. I know they'll come here organised and sit behind the ball, hoping to hit us on the counter attack because we're at home. But if the lads play as we did in the second half on Saturday — and I think that's the best we've passed the ball all season — then I'm sure we can come out on the right side.