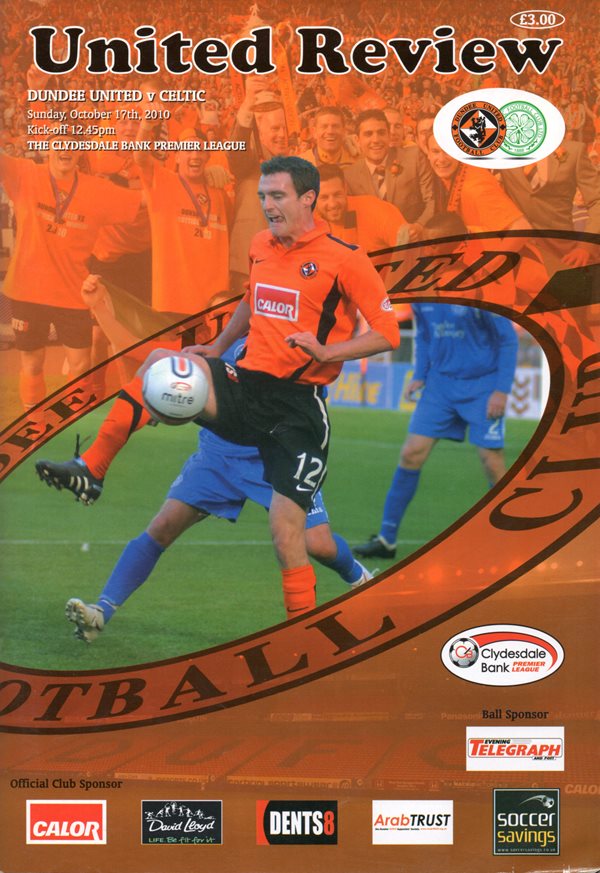 After a two week break for international matches, United made one change to the team that started the victory over Kilmarnock. Craig Conway returned following a long spell out through injury meaning that Darren Dods dropped out.

With only four minutes on the clock the visitors signalled their intentions when Hooper combined with his strike partner Samaras only for the Greek to send a shot wide with only Pernis to beat. Four minutes later is was then Stokes to try his luck but the former Hibs man fired over. The play was all flowing towards the United goal and with 12 minutes gone Celtic took the lead. Samaras picked the ball up and found Wilson on the right and the former United full back sent a low cross along the six yard box and the unmarked Gary Hooper easily finished into the roof of the net. A few minutes later the Hoops had a great chance to double their lead. Ledley threaded a brilliant pass into the path of Samaras who skipped past Pernis and then rolled the ball towards the net only for Garry Kenneth to make a goal line clearance. United then started to come back into the match A cross from Conway landed at the feet of Severin and he was unlucky to see his shot deflected wide by Samaras. The resulting corner was swung in by Conway and this time Buaben had a shot deflected wide. Finally a further corner by Conway was poorly punched clear by Forster and again Severin was undone by Samaras who this time cleared the ball to safety. The league leaders were looking dangerous on the break and Pernis had to be at his best when he saved from Stokes after a fine through ball from Wilson. Just before the half hour mark United went close when Conway crossed to the back post and David Robertson headed against the side of the post. However Celtic’s advantage was short lived when with eight minutes of the half left United equalised in slightly fortuitous circumstances. With the visitors claiming for a free kick after Ledley went down United’s David Goodwillie played on and he hit a low shot that deflected off Loovens and completely wrong footed Fraser Forster. Before the break Celtic went close to restoring their lead. Firstly Ki crossed to Majstorovic who headed into the path of Samaras who just failed to make contact with the goal gaping. Then with seconds of the half remaining Ledley shot from distance and Pernis brilliantly tipped over.

United looked in the mood at the start of the second period and early on Loovens superbly cleared from the feet of Robertson after good work from Daly. Eight minutes after the break United almost took the lead. Goodwillie won the ball in the box and then he unselfishly teed up Buaben who saw his fierce shot parried by Forster. It was not all United though and a minute later it was Kenneth who had to be on his toes when Samaras was free in the United penalty area. Conway then conceded a free kick at the edge of his own box and much to his relief Maloney’s shot just missed the target. Pernis was in fine form for the hosts and on the 65 minute mark he again kept the scores level when he saved well from Celtic’s Maloney. Seconds later United’s Dixon was booked for a foul on Stokes. With twenty minutes remaining a fabuolus game of football reached boiling point. Ki placed a great pass into the path of Hooper and he flicked the ball over Pernis but the ball landed on the roof of the net. Straight away the visitors won the ball back and there was an appeal for a penalty when Kenneth tackled Samaras but play went on and Pernis challenged Hooper and this time the referee did point to the spot. However after a strong protest from United and consulting his linesman Dougie McDonald correctly changed his decision and waved play on. With the Celtic support fuming the tiring Conway was replaced by Douglas for United and then McCourt came on for Maloney for the visitors. Time was running out and just as it looked like United would secure a well earned draw the pressure from Celtic resulted in a sickening winner. McCourt crossed into the United box, Samaras headed on, the ball then hit the chest of Dillon and Gary Hooper was the first to pounce and he hooked the ball home from close range. There was time for Pernis to make another good save from Stokes and in the dying seconds three players were booked after a bust up between both teams. United’s sub Johnny Russell, who had just replaced Daly, was shown a yellow card along with Samaras and Loovens for Celtic. United were on the attack when the referee brought to an end an enthralling game of football.

After the defeat by Rangers at Ibrox I asked the players for two victories and they duly delivered. Biggest thing for me in the wake of that Rangers defeat and having to dig out an sxtra-time result at Ross County, was that they rose to the occasion to do likewise against St Johnstone. Not only that but they had go and do it all over again at Rugby Park where we posted a third successive victory. But there is no doubt that we have had to grind these results out. Quite clearly, we have missed Craig Conway's contribution, because without him, we have had to work very hard for those wins over both St Johnstone and Kilmarnock. The game against Saints was a typical local derby and whilst I would be the first to admit we didn't play our best football, the players dug deep, showing the mettle we have at the club. And having stood firm against a big strong physical St Johnstone side, the trip to Rugby Park was equally as daunting.

Kilmarnock are a different side from last season with some good players and they put us under pressure, so it was a very important and satisfying three points. But although our team isn't quite there yet, we have got a huge result and I'm pleased that our front two got the goals. Because Jon Daly and David Goodwillie always give us the threat a side needs. So no prizes for guessing just how pleased I am that Craig Conway comes back into the reckoning as we try to stop the Celtic bandwagon. He has trained well all week, so he's very much in contention this afternoon. Whilst we have had good results his absence, with the lads having responded to whatever been asked of them, having a fit Craig Conway which is a big bonus for us a real boost for us. Celtic are on an astonishing run, having 15 consecutive SPL matches, if you include games from last season and that is almost unbelievable. I recently watched them against Kilmamock and have also trawled through DVDs of them as well. With changes Neil Lennon has made it will be a different Celtic side from the ones we have faced in the past, but they are more solid and have more of a physical aspect to them compared to last season. All games against Celtic are tough and they will undoubtedly come and attack us, but equally, we've got the weapons in our armoury to have a go at them. They may come to Tannadice on the back of a 100% record and top of the SPL table after seven games, but that doesn't mean we have any negative thoughts about the game. Here at Tannadice, and with the fans backing us, on our day we are capable of beating anyone. We proved that last season against the Old Firm, knocking Rangers out of the Scottish Cup and beating Celtic early on. so they'll come here expecting a tough game and hopefully, that's exactly what they'll get. Besides, our own fonn going into this game isn't too bad, having won four out of five, which includes victories at Ross County and Kilmarnock, and collecting points with nothing like our strongest team available, so that has been brilliant. I have no doubt once we have our strongest team available, we can demonstrate the same level of consistency that stood us in such good stead last term.