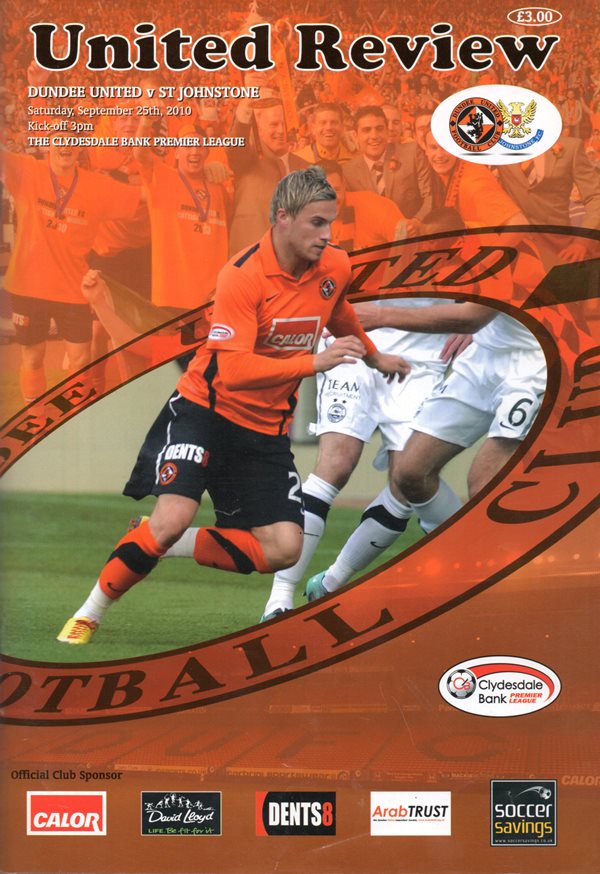 Boss Peter Houston made just a single change to the side which progressed to the quarter finals of the league cup in midweek, with Garry Kenneth passing a late fitness test to reclaim a starting berth. Scott Robertson dropped out with Kenneth making it a defensive trio alongside Dods and Severin. Dillon and Dixon were pushed further forward than usual in a new 3-5-2 formation designed to make of the loss of several key personnel. The hosts were looking to continue from where they left off in their last home league outing where they comfortably defeated Aberdeen 3-1. For the visitors there were a couple of ex-United players lining up – Danny Grainger at left back and winger Jennison Myrie -Williams who would no doubt be eager to prove a point having been released by United barely a month ago.

In a quiet opening spell all the Tangerines could muster were a succession of early corners while the visitor’s first chance fell after 12 minutes when Murray Davidson lofted a shot over the bar that was never going to trouble Dusan Pernis. With 17 minutes gone David Goodwillie was presented with a sight of goal after slack play in the Saints midfield and although his shot had power it was always rising over the bar. Myrie-Williams was looking fairly lively down the United right but the defence up until this point were in control of the winger. In the 27th minute the best chance of the match arrived and it fell to the visitors. A Grainger cross from the left struck Paul Dixon and fell straight into the path of Andy Jackson. The angle wasn’t the easiest although a goal seemed on the cards until Pernis spread himself brilliantly to block the striker’s shot before United cleared. As half time approached United came close to an opening as a deep Dixon cross from the left was just missed by Daly under pressure 6 yards out from goalkeeper Enckelman. Dillon nodded the ball back into a dangerous area with the goalkeeper still on the ground but the Saints defence were able to clear. United broke moments later and Goodwillie worked space for a shot 20 yards out which Enckelman spilled initially before holding. With the terrors having their best spell right on half time Goodwillie robbed Duberry on the bye-line before laying the ball back to the edge of the area for David Robertson to strike towards goal, only for a deflection to result in a corner and a goalless end to the half.

There was an early scare for United as Grainger crossed into the 6 yard box only for Sam Parkin to head over under pressure before Grainger brought out a great save from Pernis in the 56th minute from a curling free kick which was heading for the top corner. From the corner kick Murray Davidson fired a header over when he really should have done better as the visitor’s started to ask serious questions of the Tangerines’ defence. United broke on the counter and Goodwillie had his shot blocked in the area before the striker became the man to open the scoring for United on the hour mark. Dixon swung in a corner which broke to Buaben at the edge of the box who tried his luck with a drive towards a congested goal area. Dods and Dillon both had a bite at the ball before it broke out to David Goodwillie in the 6 yard box who cleverly prodded the ball home with the outside of his right foot. Goodwillie was always looking a big threat for United on the break and this time he was clearly upended by Steven Anderson just outside the area leading to a scuffle which produced 5 separate bookings as tempers flared. Paul Dixon stepped up and drilled a low free kick towards goal which Enckelman spilled before completing the save. Pernis then made another spectacular stop to prevent an equaliser from a close range Marcus Haber header. Garry Kenneth was forced off for the 2nd game in succession after a nasty collision with Haber, having to be replaced by Andis Shala with Daly dropping back to cover at centre half. There was much confusion as full time approached as what many believed to be a second yellow for Steven Anderson following a foul on Goodwillie failed to see the referee produce a red card despite taking several minutes to consult with both linesmen and the assistant referee over what had happened. As a result there were 5 minutes of injury time recorded and United had 2 good chances to wrap up the points during this time. First Goodwillie broke clear with Shala in support, instead opting to drive a shot at the legs of Enckelman then Prince Buaben shot just wide of the post as the hosts saw out the remaining time without danger and clinched a hard earned three points.

The last three games have produced the full gambit of soccer emotions from the terrific start against Aberdeen to the poor finish at Ibrox last week, with the midweek Co-op Cup tie against Ross County providing the grit and determination to progress to the last eight. There was no doubt that the Aberdeen game start to any game in my time at Tannadice. From possibly being a goal down, we found ourselves three up with just nine minutes gone. But Aberdeen still looked dangerous and when they got a goal back I expected them to come back at us and throw men forward as they did. However, we coped very well indeed, and we were the guys who far more of the chances in the second half. Another plus point from that game was Scott Severin whom I thought was imm.ense on his debut. Once he gets to know the players better, he'll be a huge influence, not only on the park, but off the park as well. Because he has hardly had any games, understandably he tired, but proved what an asset he will be once fully fit.

Unfortunately, last week's 4-0 defeat to Rangers at Ibrox was very much down to us giving away sloppy goals. For an hour, I felt we dominated the play in possession, but you can't gift goals to teams like Rangers because they punish you even further and it came back to haunt us. Even after going two down, a goal gets you back in it, but with the way we performing in the last 25 minutes, that was never going to happen which was disappointing. Then it was on to Dingwall and getting through to the next round was all that concerned me. That says everything about the respect I have for County. As it was, had we have taken more of the chances we created, we might have won the game in 90 minutes, but I don't want to take anything away from Ross County because they made it a very hard. Playing a major part in the win by the odd goal in three was David Goodwillie. He won the penalty and scored from it to able us to go in front, then had a hand in the extra-time own goal that won us the tie. I thought he was our best player, and thoroughly deserved being named Man of the Match. On a very good night for him, he was involved in everything. And when he's in that kind of form, he's very difficult for anyone to play against and I was delighted to see him back performing that way.

And that brings us to St Johnstone whom we welcome this afternoon. They have had an excellent week, recording their first SPL win over St Mirren last Saturday and then beating Queen of the South to advance to the quarter-finals of the Co-op Cup. In addition, Derek Mclnnes and his assistant Tony Docherty have signed extended contracts. And with so many Tannadice connections in their ranks, it makes an attractive derby all the more intriguing. Last season, we met Saints five times and all were closely fought games, none more so than their last visit here when we were two down, but came back to lead through, ending up sharing six goals. Hopefully, this afternoon's encounter will b e every bit as entertaining, but with all the points remaining at Tannadice. Today's game comes at the end of a hard week for us especially as all the players who missed Wednesday's match at Ross County — Craig Conway, Garry Kenneth, Danny Swanson, Mihael Kovacevic and Barry Douglas — are still out of contention. As you'd expect, following that tough tie against Ross County, there were a few bumps and bruises, not to mention some tired legs. For instance, neither David Robertson nor Morgaro Gomis had down much training ahead of playing on Wednesday, but came through the midweek exertions okay, typifying their great attitude. That applies equally to Scott Severin, because he was not well at all travelling up in the bus, suffering badly from a heavy cold. In fact, he should have been left out, but wanted to play and did well. Indeed, I think that's the kind the spirit that runs right throughout the team, because we went up to a place where no one finds it easy, minus four first-team players, but still battled through and those qualities will have to be equally in evidence again this afternoon.