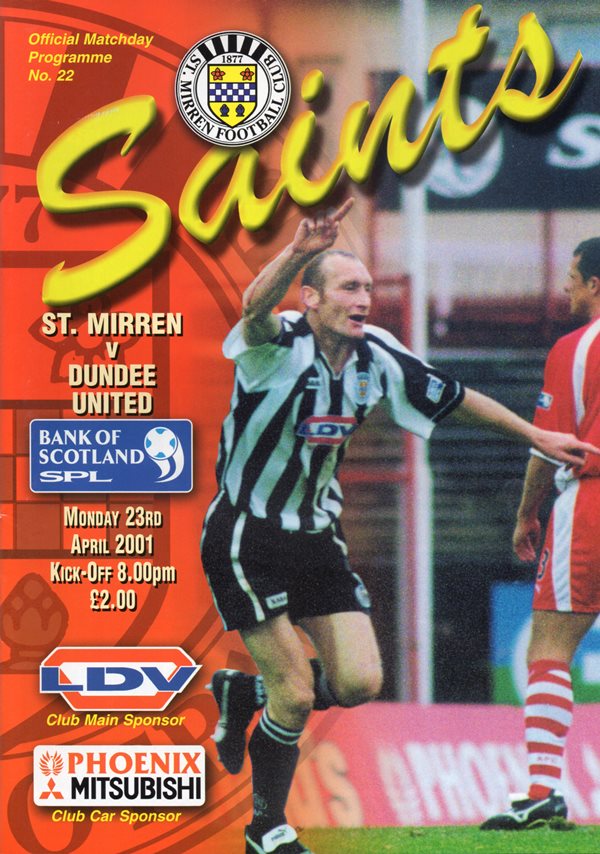 There was no doubt whatsoever, that this was the biggest match of the season for the club. While it wouldn't be the decider in the race for survival, it could have had an enormous bearing on which club played SPL football next season. United went into the match with a four point advantage over their rivals and knew a victory would all but confirm their safety while defeat would put everything back into the melting pot for both teams. Team news for United was unfortunate in that Charlie Miller and Jamie McCunnle both missed the game due to a one game suspension so Alex Smith had to find replacements for two players who had played a major part in the team's revival since the turn of the year. Jamie Buchan and Jim Hamilton came in.

As expected, with so much at stake, beautltul football went out the window with the onus very much on 100% commitment by both sets of playars. St. Mlrren started with giant striker Yardtey in attack and their aim was to play to his strengths in the air. This proved to be something of a problem for United who struggled early on to get into their passing rhythm and seemed to resort to the same long balls as their opponents. The absence of Miller was perhaps best illustrated in this game with no player In a tangerlne shirt playing to feet. For the majority of the opening half, there was plenty effort but no real goalmouth action to mentton.

In the second 45 minutes, both teams seemed to be more intent on attack and, as a result, the game opened up as a spectacle. Backed by a superb travelling support, United opened the scoring in the 53rd minute with a flne goal, Hamilton ran down the left onto a through ball from defence, steadied himself, then sent over an excellent cross to Steven Thompson who jumped above the Saints defence to bullet a tremendous header past Roy, who was left without a chance. This was just what United needed and credit goes to Thompson for a fine strike, his third goal in four SPL matches. It should have slgnalled a chance for United to go on and take control of the match and put It beyond the reach of St. Mlrren. However, it wasn't to quite work out like that and the Tangerines seemed more Intent to hold on to what they had, which perhaps let their opponents gain the upper hand, In the 70th minute, the fears of the Arabs were conflrmed when Gillies swung over a corner from the right and Laughlan caught the ball with an arm, thus giving referee Hugh Dallas no option but to award a penalty to the Salnts. Up stepped Ricky Gillies to level matters for the home side and United were, very much back to square one once again. This goal gave St. Mlrren a huge boost and they got just what they were looking for In stoppage time as the "unthinkable" happened for United. Ricky Gillies beat the offslde trap Inside the box before slipping the ball past Gallacher to snatch an unlikely and dramatic late victory for his team. It was a cruel blow for United, who had put so much effort Into the match and really ought to have bwn able to hold onto their lead after Thompson scored.