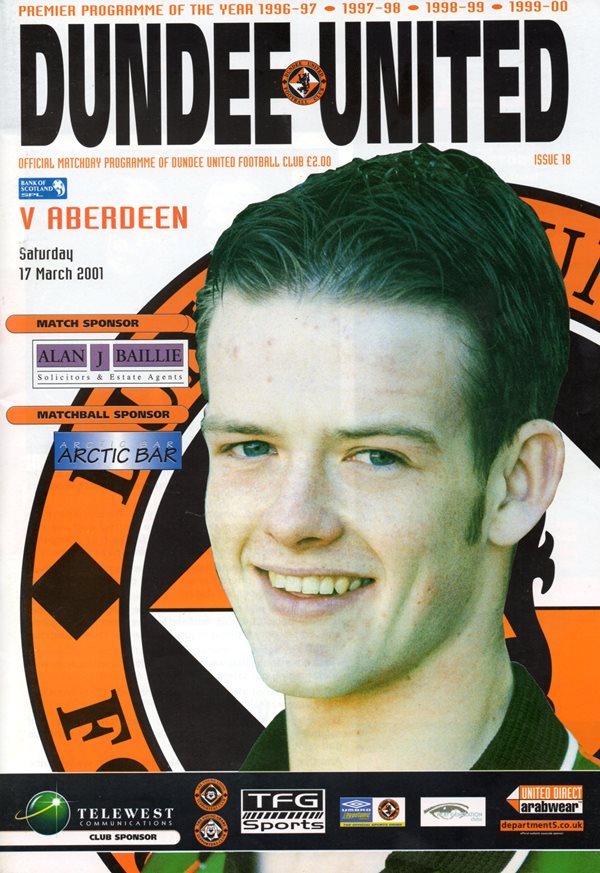 No teams during the 80's did more to challenge the Old Firm of Celtic and Rangers than both Dundee United and Aberdeen...known then as the 'New Firm'. The secret of their success back then was the ability to groom their own players from prolific youth policies into full international stars. After what can be described as several disappointing seasons by their own high standards, both teams now took to be on their way back again and, just as before, are using youth as their avenue to possible glory. For this particular SPL encounter, the Dons fielded a side containing seven squad members still eligible for their U/21 side, while United continue to put their faith in a team with average age of just 23. The suspension of last week's cup goal scorer David Hannah had forced Alex Smith into one change from the team that had knocked Rangers out the Scottish Cup, former Airdrie midfielder Tony Smith getting a rare opportunity to impress on left midfleld. Greek midfield starlet Tassos Venetis had to be content with a place on the substitutes bench, alongside £1.5m loan signing Paul Robinson, who returned after suspension.

Following their recent excellent run, it came as no surprise that United took the game to Abeideen straight from the kick off, showing the confidence and touches of a rejuvenated side. Aberdeen were going into the match on the back of four clean sheets and proved to be a stubborn side to break down. United
forced several early corners and put the visitors under a fair bit of pressure, but a mixture of good goalkeeping by Esson and a poor final ball, prevented them from making the all important breakthrough. In fact, it was Aberdeen who struck first in 12 minutes when former United striker Robbie Winters ran on to a fine through ball from Rowson before firing low into the net, giving Gallacher no chance from 10 yaids.The United keeper prevented the Dons from going further ahead in the 19th minute when he beat away a superb 25 yard effort by Rowson. Minutes later Derek Young just failed to connect with Stavrum's right wing cross as Aberdeen took a grip on the match. Slowly United battled back into the proceedings and in 32 minutes Easton's right wing cross was met by Hamilton who's powerful shot was deflected for a corner by Whyte when it looked like a goal. United's persistence finally paid off in 40 minutes when Lilley's cross was adjudged to have struck Whyte on the arm by referee Rowbotham who, despite furious Aberdeen protests, pointed to the spot. It was from the coolly taken spot kick that Charlie Miller pulled the home side level, sending Esson the wrong way in his typical classy manner. The goal came at a good time for United, just before the interval, but it was perhaps a bit unfortunate on the visitors who had created the vast majority of the chances during an entertaining opening half.

Sadly for the crowd of just under 9000, the second half failed to compare as a spectacle as both sides matched each other and defences came out on top. The best chances, again, fell to Aberdeen with Young being sent through in 70 minutes by Stavrum but, with just Gallacher to beat, he was foiled by a superb last ditch tackle by Lauchlan. Then 10 minutes later Stavrum beat two defenders on the left but preferred to square to Rowson, when a shooting chance was perhaps the better option. With time running out, United had Griffin to thank for clearing a Whyte effort off the line when it looked as though the defender had scored the winner for the Pittodrie side. As it was the game ended all square, which was about right as neither team deserved to win, or indeed, to lose what was always going to be a very hard fought game. United boss Alex Smith will have been happy with the commitment of his side and, although never quite reaching the heights of previous weeks, had done enough to earn another vital point when not at their very best. 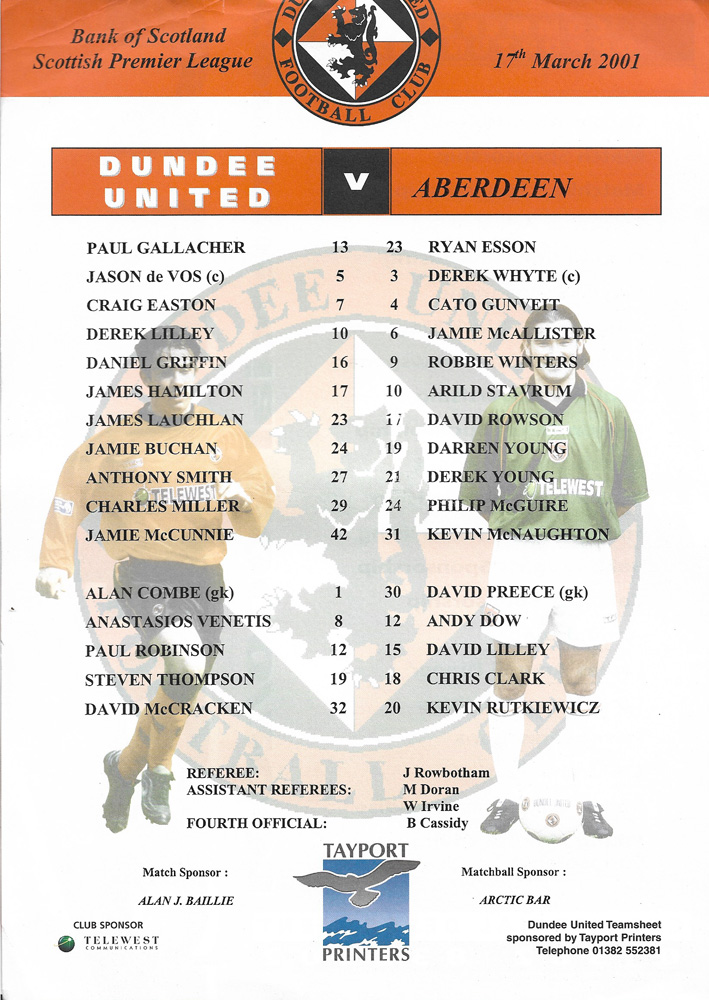