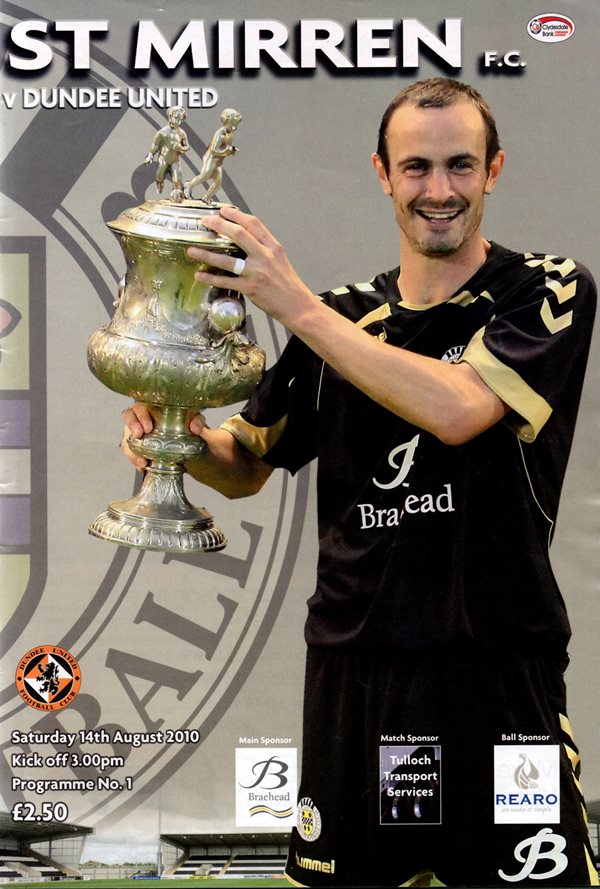 United kicked off season 2010/2011 at St Mirren Park with the starting eleven showing three changes from the side that clinched the Scottish Cup in the club’s last competitive outing. With Andy Webster returning to Rangers and Mihael Kovacevic injured, Paul Dixon and Darren Dods returned to defence, while in midfield Scott Robertson started in place of the suspended Danny Swanson. The close season saw St Mirren make more changes in personnel than any other SPL club – ten signings following Danny Lennon's appointment as manager in Paisley. Six of the new faces started this match.

Despite the turnover in personnel, it was the Buddies who looked the more settled team for the first 25 minutes of this match, knocking the ball around well and refusing to let the visitors settle in possession. But while on-loan striker Paul McGowan always looked menacing, United defended well, restricting St Mirren to a wayward long range effort from Wardlaw after 15 minutes. Pernis was called into serious action for the first time soon after to gather a dangerous low cross from Jure Travner. Despite having been on the back foot, United then went close when Dods headed a Conway corner just wide on 18 minutes, under pressure from Travner . Prince Buaben picked up a harsh first caution of the game for persistent fouling after 20 minutes, and Daly was then booked for a late tackle on Potter. Sandwiched between those yellow cards, United created another chance as a Kenneth connected with a deflected Dixon free-kick and Gallagher had to make a fine reaction save to keep out the defender’s downward header. As the half progressed, United increased their grip on the game. Scott Robertson should perhaps have shot first time when Daly played the ball into his path at the edge of the box. Gomis tried his luck from 25 yards but fired well over. At the other end St Mirren fans claimed for a penalty when Thomson’s miscued volley struck Dixon on the arm at point blank range. But there was clearly to intention on the defender’s part and the referee rightly waved away appeals. That was an increasingly rare counter attack from the hosts as United cranked up the pressure with half time approaching. Buaben shot wide from 25 yards, and then five minutes before the break Conway’s corner from the left presented Dods with a good opportunity but the defender headed wide from ten yards.

United remained in the ascendancy as the second half commenced. Conway created another great opening with a fine run and cross from the left but Goodwillie could only glance a header wide of the far post from close range. A Gomis shot was cleared from the line after another dangerous Conway corner amid incessant pressure from the visitors. McGregor was the first St Mirren player to receive a yellow card for fouling Goodwillie after being nutmegged by the striker. St Mirren then were forced to take off the injured Wardlaw, and with a shortage of strikers Lee Mair was pressed into action as a holding midfielder. As the game entered the final half hour there were calls for a penalty as Goodwillie seemed to be barged in the back, then Daly was pushed to the ground as he tried to reach a Gomis cut-back. Gallagher did well to tip a cross/shot from Buaben behind despite the distraction of Jon Daly attempting to get a touch on the ball. The keeper was again on top form to tip a Daly drive over the bar after the striker had collected a superb Gomis through-ball and neatly side-stepped two defenders at the edge of the box. Van Zanten received the next caution for a cynical hand ball as Dixon’s pass was set to send Conway free on the left as United threatened again. It was therefore entirely against the run of play that St Mirren opened the scoring on 72 minutes. Daly headed a Robb corner clear of the box, only for the unmarked Sean Lynch to rifle a superb strike into the top corner of the net from 20 yards. Myrie-Williams replaced Scott Robertson, and United continued to press forward. Hugh Murray had to clear a Dods header off the line after he was picked out by another Conway corner. Conway’s deliveries had St Mirren in all sorts of trouble and a cross from the right was missed by McGregor – but Daly failed to capitalise and another chance went begging. Ally Love replaced Steven Robb for St Mirren, and United were forced to replace the injured Conway with Cadamarteri with less than ten minutes left. In a rare St Mirren counter attack, Kenneth picked up the final caution of the game for a tug off the ball on McGowan, though the striker seemed to hit the ground rather easily. It seemed odds-on that United would go home pointless, but in the 90th minute Jon Daly capitalised on a moment of hesitation in the St Mirren defence as Travner failed to clear a cross from the left, the Irish striker stabbing the ball home from six yards past the onrushing Gallagher.