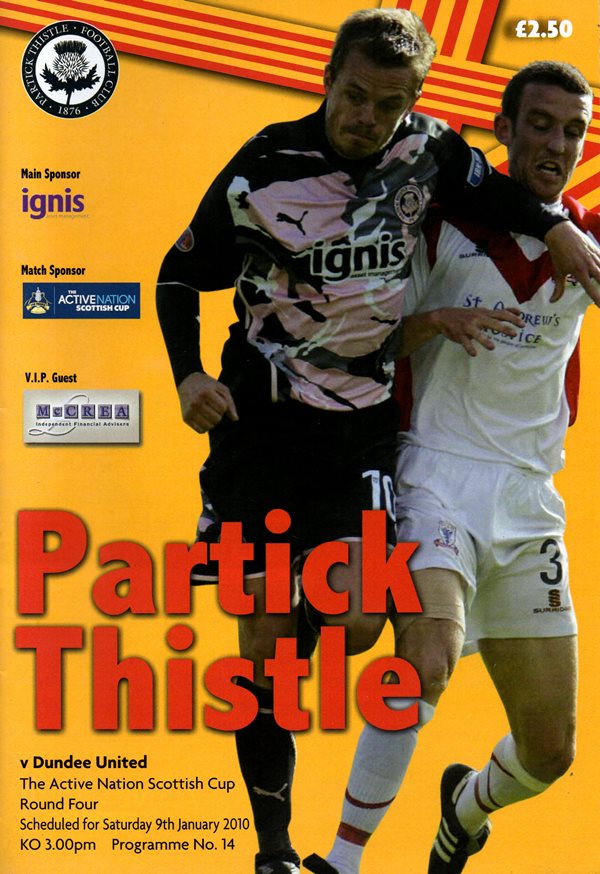 Peter Houston made three changes to the team that started in the defeat at home to Aberdeen. Pernis replaced Nicky Weaver between the posts, behind the familiar back four of Kovacevic, Webster, Kenneth and Dixon. David Robertson started in place of Sean Dillon, alongside Morgaro Gomis, Prince Buaben and Craig Conway, while Jon Daly returned to the starting line-up to replace the injured Danny Cadamarteri and partner Casalinuovo up front.

On a freezing afternoon at Firhill, it didn’t take long for the away fans to warm up, with United almost taking a fifth minute lead. Conway and Casalinuovo combined for the winger to swing in a deep cross which was almost turned into his own net by Thistle captain and former United defender Alan Archibald, only for ‘keeper Jonny Tuffey to turn the ball away for a corner. On 17 minutes, Tuffey again denied United when Robertson dinked the ball through to Casalinuovo who was clean through on goal, but the big striker’s effort was brilliantly saved. However, the SPL side were dominating the first half and took a deserved lead in the 26th minute. A Conway corner fell to Kenneth who volleyed goalwards, but the ball was helped over the line by Damián Casalinuovo and despite strong - and justified - Thistle protests for handball, referee Dougie McDonald allowed the goal to stand. Having earlier missed a one-on-one opportunity, Casalinuovo made amends and celebrated to chants of “Argentina, Argentina” in front of the travelling Arabs. Thistle’s best chance came with a quarter of an hour gone and had they scored, the Terrors could have had a much tougher tie on their hands. Simon Donnelly should have scored when Archibald crossed, but the former Celtic striker headed over the bar.

United could have killed the game off in the first minute of the second half. A good exchange of passes between Robertson, Casalinuovo and Gomis created space for Kovacevic on the right, and his cross-cum-shot was heading in at the near post but for the quick reactions of the ‘keeper. Just after the hour mark, Casalinuovo created half a yard for himself inside the box and fired a shot towards goal, but it flew just past the post and into the side netting. United survived a brief late second half onslaught from the home side who should have scored through substitute Liam Buchanan. A cross from the right was set up perfectly for the striker, but he headed straight into the arms of Pernis. United then began to cruise to victory and could have sealed the win with five minutes remaining. Gomis won the ball in midfield and United broke forward with three players to Thistle’s two, but Gomis elected to go himself, only to see his shot fly just past the top corner. United booked their place in the draw for the next round in the final minute of the match. Substitute David Goodwillie chased a long ball down the left hand side and raced towards the corner flag. But, instead of running down the clock, he cut inside and danced past two defenders before drilling his shot home from the narrowest of angles – sealing United’s place in the fifth round.

Peter Houston said: “It was a close game and a lot of people thought there was going to be an upset here. Tuffey had three or four saves from Casalinuovo and the likes – he kept them in the game. The tie could have been wrapped up at half time but wasn’t. Credit to Thistle, they worked us for the full 90 minutes, but at no time did I think we were going to lose.” He added: “The players have been a bit apprehensive after a few bad results, but I thought they were back on form today and we got the wee break we haven’t been getting for the last few weeks.”