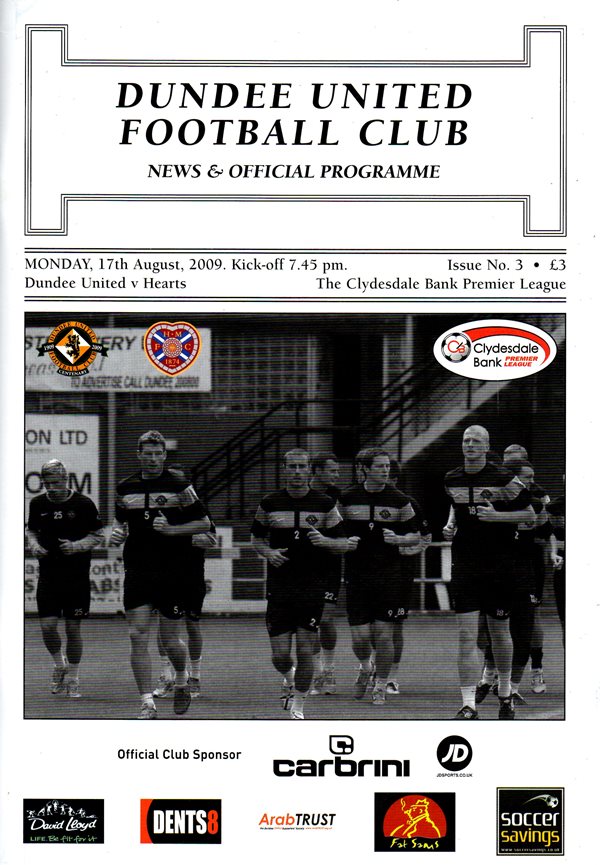 Manager Craig Levein included new signings Nicky Weaver, Andy Webster and Danny Cadamarteri in his line up as the curtain was raised on United’s centenary season. After a satisfying pre season campaign the tangerines were eager to hit the ground running with Hearts the visitors for what looked like being a close encounter. There was a healthy crowd inside Tannadice as both sets of supporters came to witness what they hoped would be a successful SPL campaign for their respective clubs.

Like any new forward, Cadamarteri would have been keen to open his scoring account for the club quickly, though few would have believed it would only take until the 4th minute for him to do so. Paul Dixon found Danny Swanson in acres of space on the left and as the midfield man drove into the area his progress was halted by a clear trip from Hearts defender Eggert Jonsson. Danny Cadamarteri took responsibility for the penalty and gave the Terrors the perfect start as his well placed kick squirmed past the hands of Marian Kello into the bottom corner of the net. There were no real chances to follow for the next 15 minutes or so as both teams tried to come to terms with the blistering start made by the hosts, although the United midfield had looked slightly more in control of proceedings. There was then another loud appeal for a United penalty in the 17th minute and again Cadamarteri was involved. This time it was the former Everton man himself who was upended under the challenge of Ismail Bouzid, and although it wasn’t completely clear whether the incident was inside or outside the area, there did appear to most inside the ground to have been clear contact but referee Steve Conroy waved play on. Mihael Kovacevic then threatened from a corner as he headed goal ward but this time Kello gathered comfortably. Hearts tested Nicky Weaver in the United goal with a quarter of the game played but despite a decent hit from long range by Ruben Palazuelos the keeper dived to his left and held well. Hearts’ main threat was coming from dead ball situations in the United half and Jose Goncalves came close to connecting with one of them in the 33rd minute but thankfully this time the delivery from David Obua just evaded him and ran out to safety. Swanson was causing Hearts all sorts of problems with his speed and trickery on the left side and was again sent crashing down to earth in the area as he knocked the ball past Dawid Kucharski, but in fairness there was little this time that the defender could do to get out of the way and play carried on. New Hearts striker David Witteveen then had a momentary glimpse of goal after Andy Webster lost possession deep in the box however Weaver was quick to come to his rescue and gather the ball. Weaver again kept Hearts at bay as half time approached when the Englishman dived low to his right turn away an Obua shot from 13 yards before United spurned the final opportunity of the half when after a teasing ball into the box resulted in David Goodwillie running into traffic when the unmarked Prince Buaben was probably better placed to shoot on goal. United will have been more than satisfied to have taken such an early lead went on to have chances to go further ahead. Hearts had however given plenty of warning, especially from set pieces, that they were capable of getting back into the game therefore another strong 2nd half showing was going to be required to maintain the advantage.

Minutes into the half Hearts worked a move down the left side which ended with a dangerous drilled cross from Obua which Weaver turned away for his defence to clear. Goodwillie then missed a glorious opportunity after a searching ball from Dixon cleared the defence and left Goodwillie in behind on the angle. With the goal gaping he tried to curl the ball into the top corner only to miss the target by a yard or so. Hearts were then reduced to 10 men with 51 minutes played after a second yellow card was awarded to Michael Stewart following a rash challenge from behind on Scott Robertson which was very similar to his earlier tackle on Swanson. Hearts fans were claiming a penalty in the 60th minute as Suso Santana hit the ground after running between Webster and Kovacevic, however in similar fashion to the earlier appeal from United, there was little the defenders could do to avoid the collision. United were not keeping the ball as long as they would like to at this stage and with Hearts also becoming frustrated tempers boiled over following a harsh challenge by Ian Black on Danny Swanson. Swanson reacted angrily to the incident with Santana also then becoming involved with the result being a booking for all three parties. After a tense spell from both sides Goodwillie almost made up for his earlier miss when he brought out the save of the match from Kello who superbly turned away the strikers close range shot following a cross from substitute Craig Conway. There was a moment of panic in the United defence moments later as Santana looked set to pounce on an Obua cross but Dixon did superbly well to close down and concede a corner. United then all but sealed the game in the 85th minute with a counter attack move which started deep inside their own half. Morgaro Gomis took possession and knocked the ball sideways to Buaben who put Danny Cadamarteri clean through on Kello who raced off his line, allowing the United man to coolly slot it past the Hearts goalkeeper and watch it trundle into the back of the net from midway inside the half. There was still time for Weaver to again show his capabilities as he expertly turned a late Jonsson header over the bar from point blank range. Full time: 2-0 to United. It was the perfect start for Craig Levein's side as they ran out worthy winners following an absorbing encounter. Despite some moments of panic you always felt this was a game United were going to win and in the end the Stewart sending off told its own story about the frustration they felt as a result of the quality the home side demonstrated. 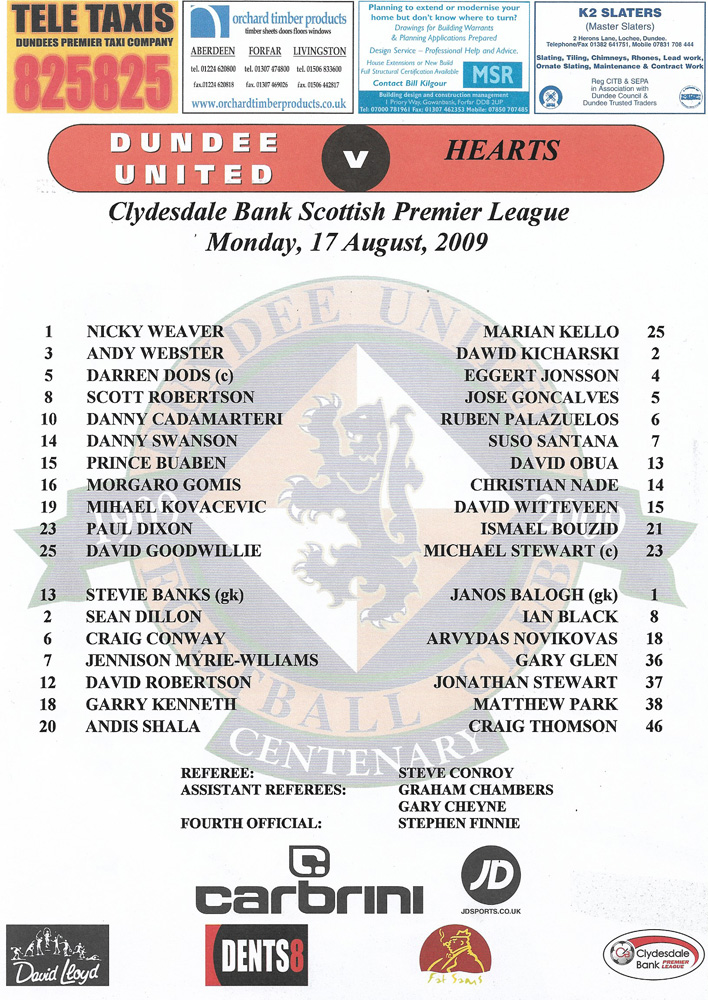 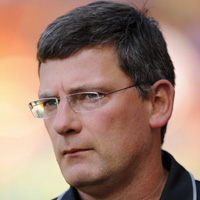 Firstly, I would like to welcome everyone back to Tannadice as well as extending a warm welcome to my old clubs Hearts. Overall, I have been relatively pleased with the way things have gone in pre-season, but as I have been stressing all week, I was similarly happy with the way things went twelve months ago, only for us to fall flat on our faces at Hamilton in the opening game. I don't know whether it was a case of complacency slipping in or what, but I have been at pains to guard against falling into the same trap tonight! Because we have played well against Newcastle and beaten Blackburn Rovers, a Premiership side, there is a temptation to think that we are ahead of ourselves from where we were this time Last year. Therefore, I have been drumming into the players to ensure there is no question of complacency against Hearts. The fact that we met a newly promoted side this time last season, was in hindsight a major factor for our disappointing start to last season s campaign, but that shouldn't come into play against Hearts, given how hard games against them were last season when they finished third.

That aside, our physical preparation for the new term has been excellent. t have watched Hearts and had them watched twice and like us have good results against Premiership Opposition, drawing with both Bolton and Sunderland. And whilst they have lost a few players, and some good players, they have brought new players and now we wilt see if the guys they have brought in are up to doing as good a job as the other lads did. But knowing their manager Csaba Laslo as I do, and having proved that he is a really good manager, I think that he'll have been looking to strengthen his squad not weaken it. And that means we couldn't really have had a much tougher match to open the season. But after last year's experience, when the defeat at Hamilton, dented our confidence in the early games, only emphasises, Just how vital this first game is. It isn't the end of the world if you lose as we did last term, because we did recover after a terrible start but it means that you are always playing catch up and it is not something I am keen to see repeated. Finally, just before our last game against Blackburn, I was delighted that we have been able to bring Nicky Weaver in until the next transfer window. I said that I didn't want to sign a goalkeeper who was no better than the ones already available to me and with Nicky being a proven goalkeeper at both Premiership and Championship level, with an impressive pedigree, he fits the bill perfectly. Not that he had much opportunity to show what he is capable of against Blackburn when he was so rarely called into action!