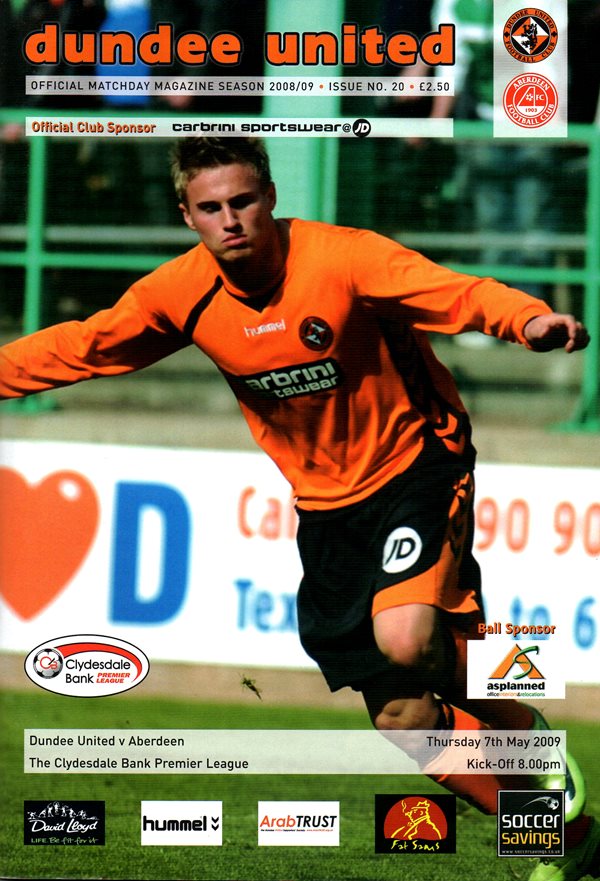 United were denied a home victory and missed the chance to leapfrog Hearts into third place in the SPL by ten-man Aberdeen at Tannadice on Thursday night.

The Tangerines came from a goal behind but couldn’t find the elusive winner and had to settle for a 1-1 draw.

Aberdeen took a shock lead through former United striker Lee Miller, but were soon back on level terms through David Goodwillie.

However, despite the sending-off of another ex-player, Mark Kerr, United couldn’t make the extra man count and Aberdeen held on for a point.

United started the game brightly and had the first attempt on goal.

With a minute on the clock, Prince Buaben won the ball in midfield and played it into the path of Goodwillie, who struck a low drive just wide of Jamie Langfield’s right hand post.

United were beginning to dominate the midfield and continued to press for the opener.

And it was the central pairing of Morgaro Gomis and Buaben who carved out the next opportunity – a one-two giving Buaben the space to hit a 25-yarder that flew just over the crossbar.

Midway through the first half, the home side had another chance to go in front.

A clever one-two with Andis Shala saw Goodwillie in space inside the box, only to see his curling effort float narrowly over the bar with Langfield beaten.

Then, against the run of play, Aberdeen took the lead on 33 minutes.

A corner from Charlie Mulgrew was headed back across goal by Scott Severin and turned home by Miller.

Despite the set-back, Craig Levein’s young side showed their character by getting back on level terms only five minutes later.

United broke forward down the right hand side and David Robertson whipped in a perfect cross which was met by Goodwillie, who powered a header past Langfield to make it 1-1.

The second half saw a new-look Aberdeen side, as Jimmy Calderwood’s men tried to get their noses in front once more.

Despite dominating possession for long spells of the second period, the Dons never looked like breaching United’s solid rearguard.

Zaluska was forced into action on a number of occasions, but only from free-kicks and corners.

Craig Levein brought on Craig Conway and Scott Robertson to try to get the home side back into the game, and the substitutions had the desired effect.

Robertson was beginning to get a foot on the ball and United started to push for a winning goal.

On 75 minutes, a break down the left led to a foul on Conway and Kerr’s protests led to him being shown a straight red card.

Conway dusted himself down, and curled a free-kick goalwards, only to see his effort crash off the post.

The home side were now well on top, but couldn’t find a way through.

Goodwillie came closest late on when he nut-megged the defender a fired in a shot, but Langfield tipped it round the post and Aberdeen held on for a draw.