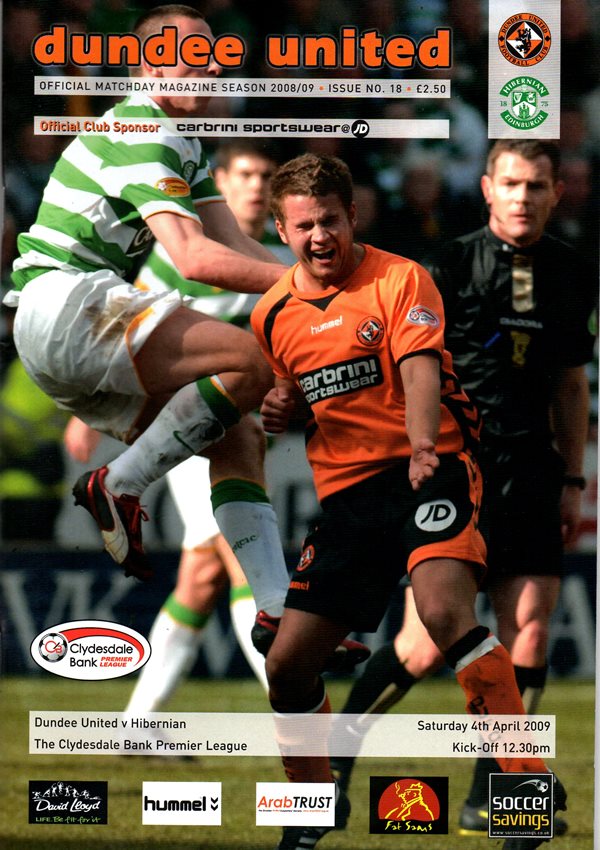 David Goodwillie’s stoppage time equaliser salvaged a point for Dundee United, after a superb second-half showing saw United come back from two goals down in a thrilling encounter at Tannadice this afternoon.

Craig Levein’s side endured a nightmare start to the game, with talisman Jon Daly stretchered off after just three minutes following an innocuous looking challenge in the Hibs’ half. Hibernian captain Rob Jones immediately signalled to the bench for a stretcher, indicating it could be a serious injury for the Irishman.

United then found themselves two goals down inside the opening ten minutes after Colin Nish nabbed two quick goals.

The striker, who before today hadn’t found the net since December, produced a wonder-goal to put the visitors in front, lashing the ball into the top right hand corner of the net from 30 yards on six minutes.

Moments later, he doubled his tally and grabbed his eight of the season after a calamity of errors at the back for United. Prince Buaben’s headed back pass rebounded just outside the six-yard box, and the ball rolled into the path of Nish, who made no mistake in slotting the ball past Zaluska from close range.

Hibernian enjoyed a spate of clear goal scoring opportunities in the opening forty-five, much of which made difficult viewing for the home support.

Nish could have secured his hat-trick on the quarter hour mark when Denes Rosa whipped the ball across the face of Zaluska’s goal from the by-line, but the Polish shot-stopper produced a fine one-handed save to tip to ball wide. Eight minutes later, Nish was gifted another opportunity to notch his third of the afternoon when Steven Fletcher and Derek Riordan combined down the left flank to whip the ball into the United box.

But the unmarked Nish couldn’t steer his header on target, much the relief of the United fans behind the goal.

Fletcher then came close for Hibs, after Nish cut the ball across the face of goal., but the Scotland striker couldn’t repeat his midweek goal scoring exploits as he stabbed his effort just wide from inside the six yard box.

United were given a lifeline with just over 30 minutes gone after Chris Hogg’s push on Warren Feeney earned United a penalty. Craig Conway struck
the ball well from the spot, but Szamotulski produced an excellent save to deny the pint-sized midfielder.

United were lucky to enter the tunnel just 2-0 down at half-time, but the visitors would be left to rue their missed chances as a reinvigorated Dundee United took to the pitch for the second period.

Lee Wilkie came close with a volley immediately after the re-start as United signalled their intentions early on. And it was his fellow centre half Garry Kenneth who would give United a ray of hope on 53 minutes when his powerful downward header ended Szamotulski’s 400+ minute run without conceding.

United pushed forward with wave after wave of attack after getting one back, and always looked likely to get back on level terms.

Buaben tested the keeper with a 30-yard drive, before Sandaza came inches away from levelling the match. Full back Paul Dixon drilled the ball across the Hibs goalmouth, and the Spaniard’s touch wasn’t enough to steer the ball goal ward as it sailed agonisingly wide of the post.

Sandaza almost bagged his 11th SPL goal of the campaign with five minutes to go, but the Monk was able to palm to ball wide for a corner. From his
low drive. Sandaza threatened again in the closing stages, only to see his header saved again by the Hibs ‘keeper.

And just as it looked as though Hibernian would weather the storm and hang on for a vital three points in the race for a top six finish, substitute David Goodwillie was able to bundle the ball over the line from close range after a frantic 10-man goalmouth scramble fell his way.

Lee Wilkie could have snatched a late-late winner for the home side, but his header was wide of the mark.